For those new to the MINI CHALLENGE last year, Nathan Harrison would demonstrate himself as a fresh-faced young star, dominating the top class of single-make Touring Cars. Though for Harrison himself, 2020 was a culmination of a 6-year long journey that saw him rise from inexperienced rookie to one of the country’s most promising prodigies.

His JCW title was not without its hardships and after a dire second round at Knockhill sat fifth in the standings, 56 points behind points leader Lewis Brown. The EXCELR8 Motorsport driver was unfazed though and used the one month break between rounds to reset, picking up two further victories in the final three rounds to overhaul long-term rival Ant Whorton-Eales.

Debuting in the MINI CHALLENGE in 2015, the Oxfordshire racer has climbed the ranks to finish 2020 as MINI Racing’s most successful driver of the modern generation. He will turn his attention to grander aspirations for 2021, so let’s have a look back at one of MINI’s prodigal sons.

Like many young drivers, Harrison’s journey had started in karting, winning the British Mini Max Championship in 2009 as well as finishing runner-up in the British and European Junior Max Championship in 2011. Stepping up to Ginetta Juniors at the bright young age of 15, Harrison was unable to finish the season due to financial commitments, a disappointment for a promising talent that had immediately proved a top 5 threat.

Stepping back from racing for a few years, Harrison found an affordable way back into racing in 2015 courtesy of the MINI CHALLENGE.

Entering the Cooper Class, Harrison immediately made an impact upon his return to racing. Winning on debut at Donington Park and recording two further podiums to leave the opening weekend as a major title contender alongside double-winner Ricky Page. Harrison’s drive in the opening race was made even more impressive as he scythed through the order from a lowly ninth in qualifying, the first sparks of his exceptional talent.

Driving for Coastal Racing, Harrison had the experience of a team which had clinched the previous two Cooper titles, both with Shane Stoney. Stoney though was now out of the driving seat and title expectations were on the experienced Page and Mark Wakefield. Here though, Harrison was set to prove his interrupted career was no set back, taking six wins in eight races to secure the title before the final two races.

As champion, top rookie and notably the MINI CHALLENGE Sunoco Winner for 2015, the Oxfordshire driver was one of the hot properties in the Trophy as he moved up to the JCW class for 2016.

For the second year in a row, Harrison made an impact immediately. Defending JCW champion Charlie Butler-Henderson was back to defend his crown, winning the opening race at Donington Park, but who was to follow him home? Harrison.

Branding the now iconic #27 on his new MINI F56, Harrison had qualified on pole, only to drop to third by the end of the first lap. Fighting back through the order, he hounded Butler-Henderson, finishing a mere 0.3 seconds behind the highly accomplished ex-BTCC driver.

2016 had presented Harrison with a rare opportunity to do the double in the newly rebranded JCW Class that was only in its second year of using the MINI F56 chassis. Beating Butler-Henderson in the second race would only set up a year long battle that saw the rookie driver fight for honours alongside Charlie and David Grady.

Harrison’s string of eight straight podiums initially gave him the championship momentum, but a poor run of results at Brands Hatch Indy and Oulton Park saw the gap reduce to the on-form Grady. By seasons end only 19 points separated the three stars, with Grady’s double win at Snetterton enough to clinch him the title by 9 points over the young charger. Despite narrowly missing out on the overall crown, Harrison had ended the year as Rookie and Retailer Cup Champion, a heroic achievement for the charger.

2017 saw a year away from MINI’s as Harrison became Renault Clio Cup Graduate champion and tested for the highly respected BTCC team Motorbase, at a Dunlop Tyre Test.

Knocking on the door of the top echelons of Touring Car racing, Harrison returned to MINI CHALLENGE in 2018, now a part of EXCELR8 Motorsport, for a second crack at the crown having witnessed 2017 title winner Brett Smith get snatched up by BTCC’s Eurotech Racing.

Supporting the British GT Championship, with races televised online, here Harrison would again prove a front runner and keen overtaker with ten podiums over the 16 race calendar. It would not be enough though as Ant Whorton-Eales picked up 10 wins to clean up with the title before the final race to again leave Harrison with only the Retailer Cup and vice-champion title. Another defeat by an ex-BTCC racer.

By 2019, Harrison had started to build a reputation on the brink of the big leagues as he finished JCW Class runner-up for the third time in as many attempts. This time it would hit harder though, as he beat eventual champion James Gornall on overall score, only to lose by 2 points when dropped points were considered.

It had been a year of great consistency for the pair, as Gornall picked up a top five in every race he finished, while Harrison failed to make the podium on just 3 occasions. This would include a gritty drive from the back of the grid at Silverstone to finish second as Gornall recorded his only retirement of the campaign.

Picking up five wins a piece, Gornall’s success would make him the second MINI CHALLENGE driver in 3 years to be propelled to the BTCC, with TradePriceCars.

Forever the bridesmaid, but never the bride, Harrison headed into 20 years now in front of the ITV cameras, for his fourth attempt at the MINI CHALLENGE JCW Class title.

2018 champion Ant Whorton-Eales would again return to the fore, taking victory in the opening race at Donington Park as Harrison harried him all the way in second. Not wishing for a repeat the result, Harrison took the initiative into Redgate during the second race, securing his first win of the year.

Previous campaigns had proven that retirements were crucial in the championship battle and after his second retirement in as many races at Knockhill, Harrison was rightly concerned about his title aspirations.

New for the 2020 season, drivers were required to drop two races from their season total, not just one. Having used his lifeline early in the campaign, Harrison knew a faultless campaign was essential to remain in touch as the circus rolled on.

By the conclusion of another nail-biting Silverstone weekend, the stars of the round, Whorton-Eales and Harrison sat back atop the standings, just one point splitting the pair on. AW-E though had only recorded one retirement that season giving him the ability to drop a race that Harrison knew he no longer had.

Under these circumstances most drivers would have secured solid points, Harrison however was still flat out, picking up pole, win and fastest lap in the opening Snetterton race ahead of teammate Dan Zelos, scoring almost double the points of Whorton-Eales and eliminating the points gap created by the extra retirement.

After the elation of race one, the tables had appeared to have turned in the second race, being boxed in at the start, failing to largely threaten the top ten, as AW-E worked his way back onto the podium places. To make matters worse, Harrison was now carrying a 7 second penalty.

It would all change on lap three though, as Whorton-Eales was forced to retire.

After his penalty, Harrison would only finish fourteenth, but it was more than enough to retake the championship lead, both overall and now on dropped points too. His JamSport rival trudged slowly back to the pits as Harrison was left beaming, 27 points clear in the #27 with one round to go.

All eyes turned to the championship top three on Saturday as Harrison, Whorton-Eales and Zelos could all take the crown.

It was a familiar scenario, reminiscent of his first JCW attempt in 2016. Understandably he remained humble throughout the build-up, not wishing to tempt fate before a wheel had been turned.

Keeping his composure throughout the race, he finished second, two places ahead of the Staffordshire driver. With Zelos joining him on the podium attention turned to the final race in which Nathan needed only a thirteenth to achieve what he’d long dreamed of.

Keeping a cool head, he drove with care a precision to remain out of trouble, as Whorton-Eales floundered, failing to gain the positions he needed. Come the chequered flag, an eighth place was more than enough for Harrison to secure the crown to the elation of himself and his family.

In total Harrison stands atop the records with 23 wins a strike rate of just over one in four, finishing on the podium in almost 70% of all the MINI CHALLENGE races he has entered.

Now turning his head towards the future, Harrison remains committed to his goal of stepping into the British Touring Car Championship, now as a champion of the UK’s Premier single-make Touring Car series.

For 2021 he’s signed with Team HARD. to race in the Porsche Carrera Cup, the UK’s fastest single-make series, where he will undoubtable be a favourite for the championship right off the bat, continuing his progression that was developed in the UK finest leagues.

A long way from his humbled beginnings in the MINI CHALLENGE that had given him a crucial second chance in his young career. 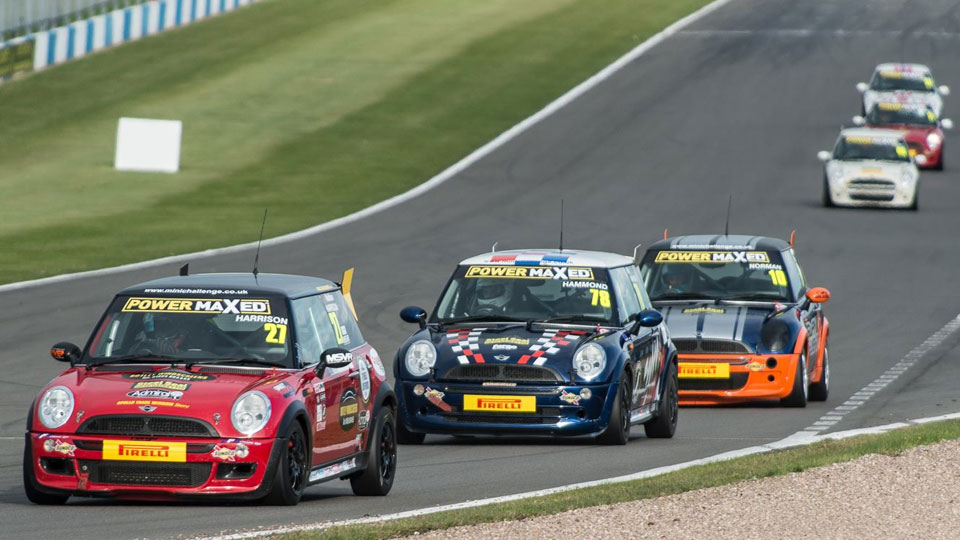 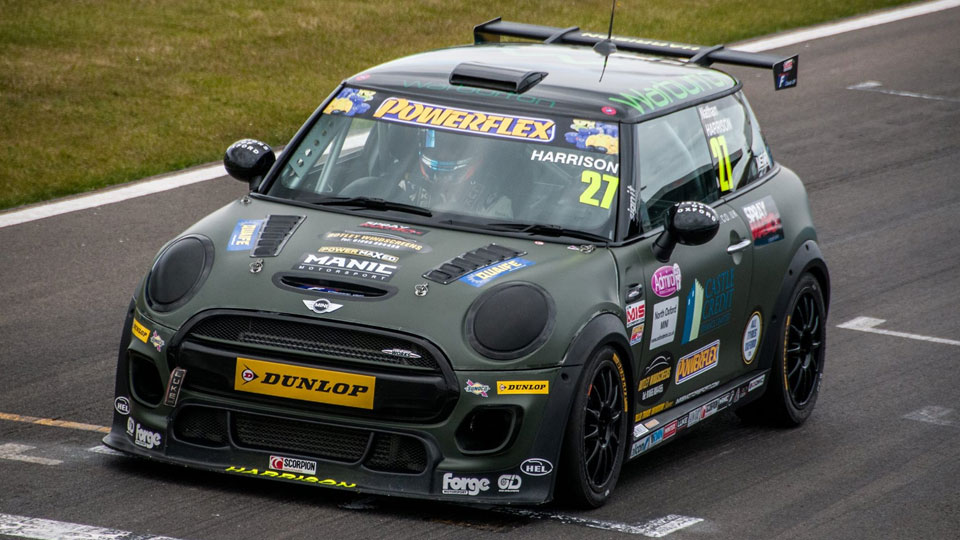 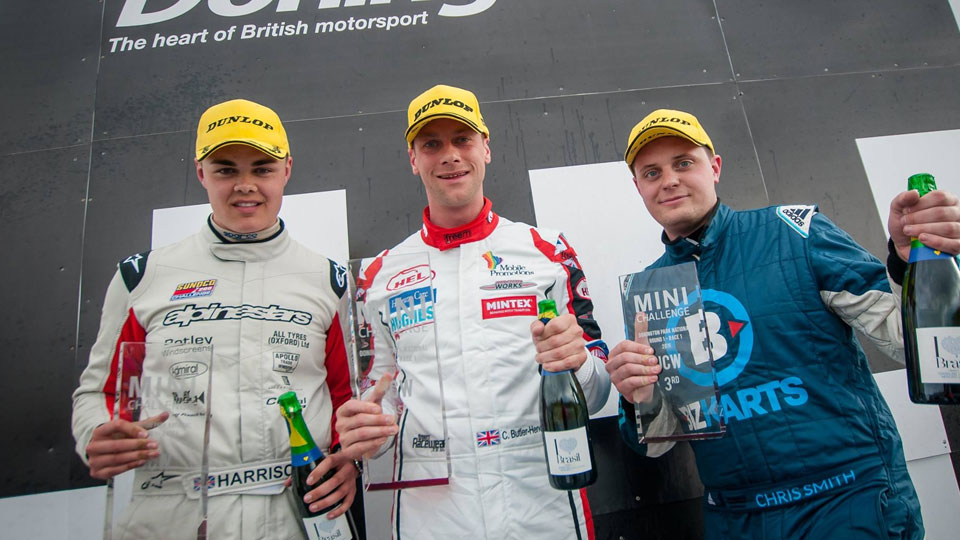 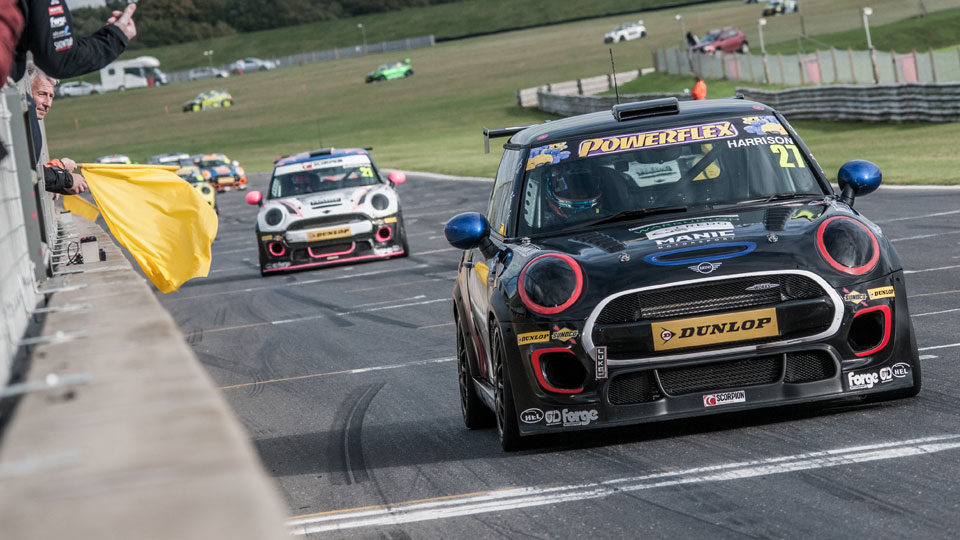 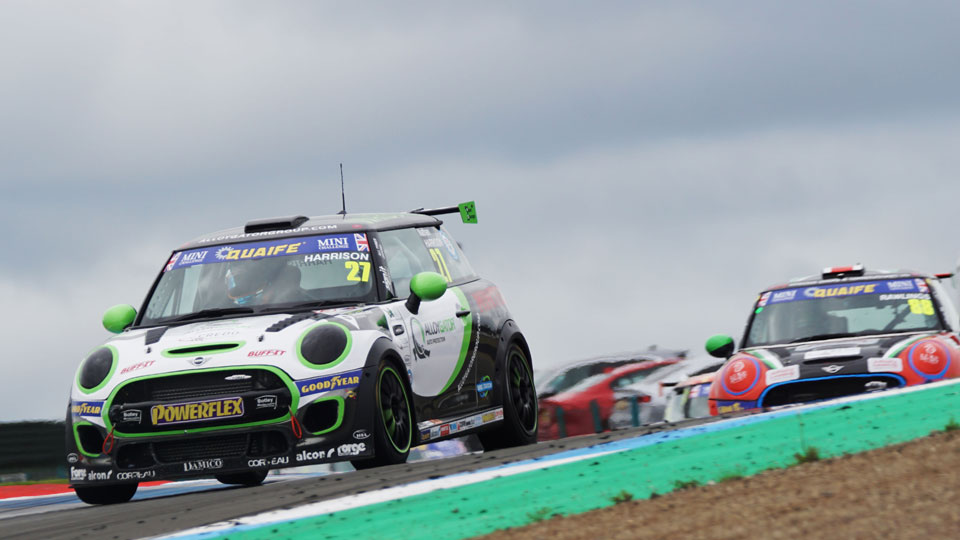 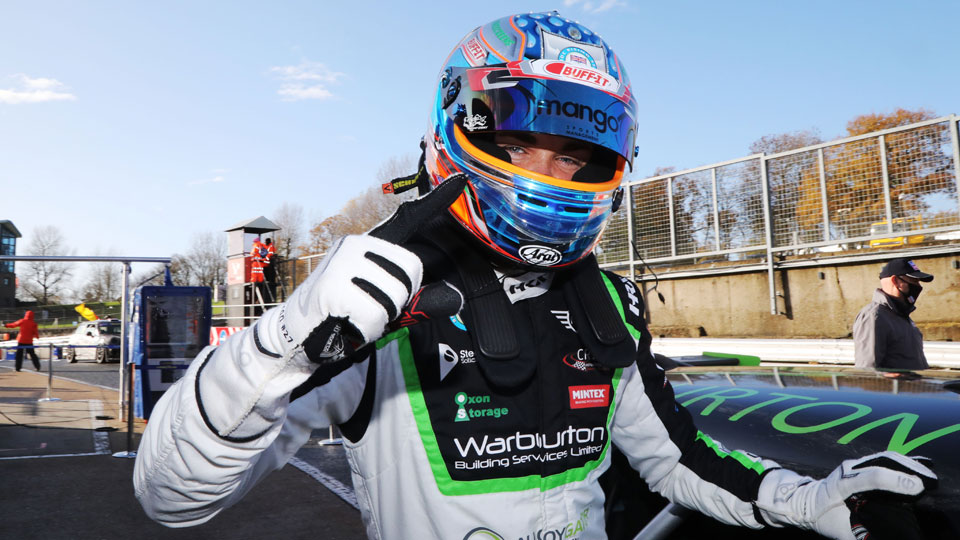