Ant Whorton-Eales completed a perfect hat-trick of MINI CHALLENGE JCW victories during the Brands Hatch MINI Festival, but the race for the title will go down to the final event of the year.

The final race of the weekend took place in atrocious wet conditions, and suffered two red flag stoppages, the second bringing an early end to proceedings.

Whorton-Eales started back on row three after the top six cars were reversed following the random grid draw. But that hardly held him back as the runaway championship leader made a stellar start to run around the outside of everyone –including keeping his foot in with two wheels on the wet grass at one point – to emerge in second behind early leader Nathan Harrison.

Harrison defended hard from the charging AW-E, knowing he faced all of the pressure in the title chase. However, Harrison slid wide at Surtees corner, before rejoining and narrowly losing out on the drag race around Clearways to the new leader.

Things were then stopped when Jake de Haan crashed out at Druids corner, prompting the red flags to fly.

When things restarted behind the safety car, Whorton-Eales got a great getaway when the race went green, but it would only last another few laps before the reds flew again for the deteriorating conditions.

“It’s never the way you want to win a race, under a red flag, but it’s still be a mega weekend,” said Whorton-Eales. “The start was the key for me. I just kept my foot down and stayed wide, it turns out these Dunlops wets are pretty good on wet grass too! The championship goes on to Donington, but that’s no bad thing.”

Dan Zelos completed the podium, making it two third places out of three outings on his first weekend. “I was only hoping for a reversed grid podium finish, and I’ve ended up with two!” he said. “Big thanks to MINI UK for getting me out this weekend. It’s been mega.”

Jack Davidson took another fine fourth place after a bruising battle with Henry Neal. The two cars traded paint on more than one occasion before Davidson edged ahead before the red flags.

Jordan Collard was sixth, having survived a big rallycross moment at Surtees before rejoining. Lawrence Davey was seventh, ahead of Luke Caudle, Will Neal and the charging Rob Smith, who worked wonders to gain 11 places from the back in the opening laps before the stoppages halted his progress. 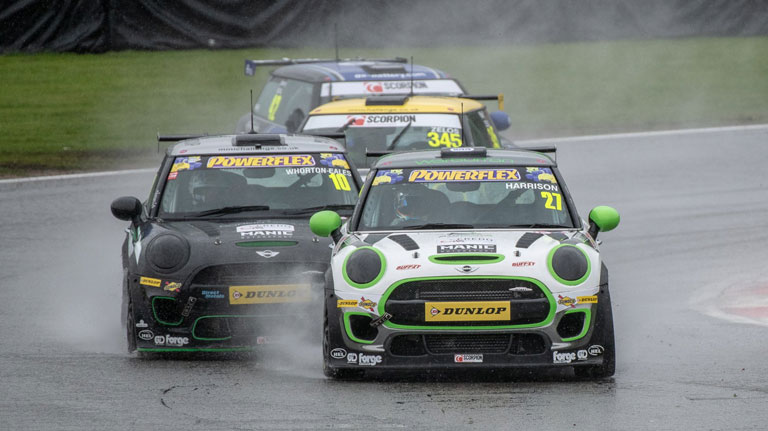 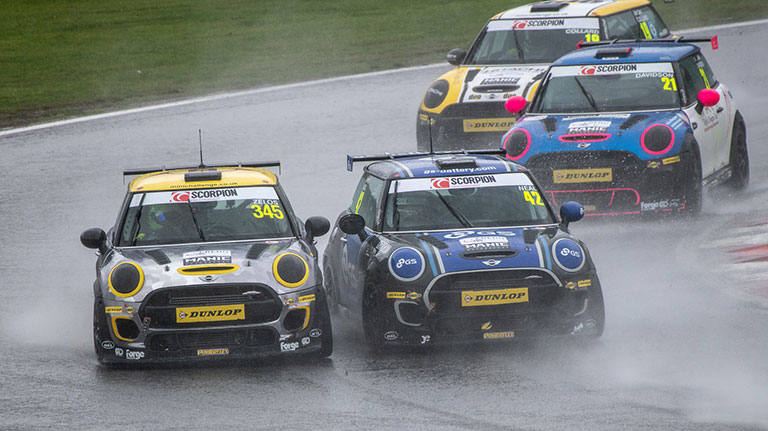 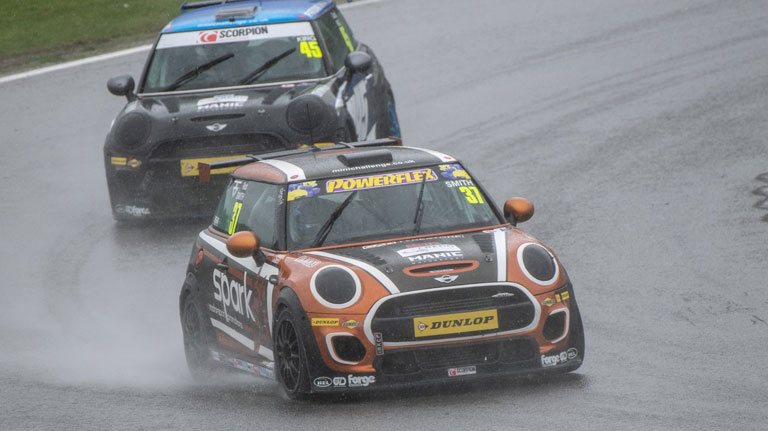