Dan Zelos saw off the early challenge of local driver Joe Tanner to secure his second victory of the Quaife MINI CHALLENGE season in the opening race of the weekend at Knockhill.

The EXCELR8 Motorsport driver qualified on pole position to end the run of success being enjoyed by team-mate – and championship leader – Max Bird, who has started from the front in each of the previous three meetings.

Zelos was able to hold the lead when the lights went out to get race one underway, but soon came under pressure from a fast-starting Tanner, who had jumped ahead of Jason Lockwood off the line.

Tanner made a move to get ahead at the Hairpin at the end of the opening lap but Zelos was able to get the cutback on the exit of the corner to reclaim the place from the BTC Racing driver and once ahead, he was able to control the race from the front, edging away to secure what was ultimately a comfortable win.

With an additional six bonus points for snaring the fastest lap, a maximum score from the weekend opener moves Zelos into the championship lead for the first time this season.

“Joe had a good go at the start and managed to get ahead but I got the cutback, and from there, I was able to get away at the front,” he said. “It was all about putting consistent laps in and to get the fastest lap as well is great.

“As racers, we want to go as quick as we can every lap so when you have a lead you have to be careful not to do something stupid and throw the car off. There was some fluid down at the Chicane which made it a bit tasty but I’m getting more confidence at running out front and that race couldn’t have gone much better.”

Tanner would hold second until the third lap of the race, when Lockwood saw his chance to get ahead at Clarks, launching his car down the inside to claim the place with Jack Davidson also following him through.

As the battle for third place developed behind, Lockwood was able to break clear and would cross the line in a solid second spot having lacked the outright speed to keep pace with Zelos at the front.

It marked a second podium finish in as many meetings.

“This is my second year in car racing and the starts have been what I’ve struggled with,” he said. “They were better at Oulton Park but it let me down a little today, although I don’t think I had the pace to match Dan. Second is still a good result though, and it’s nice to convert qualifying into a podium.”

The fight for third between Scottish pair Davidson and Tanner would ultimately be decided in favour of Tanner, who sized up his rival ahead before seeing a chance to move ahead on lap nine.

As Davidson was then forced into an increasingly defensive drive to keep a charging Bird at bay, Tanner was able to wrap up his first podium finish of the campaign and also a first top three finish for the BTC Racing team.

“I’m really happy with that,” he said. “I had a nice gap behind me towards the end so I almost gave up and just made sure I brought the car home as it was so lairy – I didn’t want to throw it off like an idiot! I just wanted to get to the end and it’s great to reward the team for the effort they have put in.”

Davidson’s battle with Bird – who had fought his way up from seventh on the grid – would rage until the final lap, with the pair going side-by-side out of the final corner.

Davidson would hold on on the run to the line to take the place, with Sam Weller joining the party in the closing stages having fought his way ahead of Max Coates and Callum Newsham in the middle stages of the race.

Weller would take the flag in sixth spot ahead of Newsham and Coates, with Ethan Hammerton and Isaac Smith rounding out the top ten.

Smith’s tenth place came despite a wild moment at Clarks that saw him run off track but he recovered well to claim a top ten finish, with Lewis Brown a lonely eleventh behind.

Ronan Pearson was twelfth as he battled handling issues at his home circuit, with James MacIntyre, Brad Hutchison and Hannah Chapman completing the top 15.

Lydia Walmsley and Bradley Gravett retired after a clash at Duffus Dip, whilst both Kyle Reid and Ryan Faulconbridge were forced to park their cars with mechanical issues. Mark Dickson failed to start after his dramatic qualifying roll, with the LUX Motorsport team taking his car back to base in the hope of carrying out repair work that will allow him to race on Sunday. 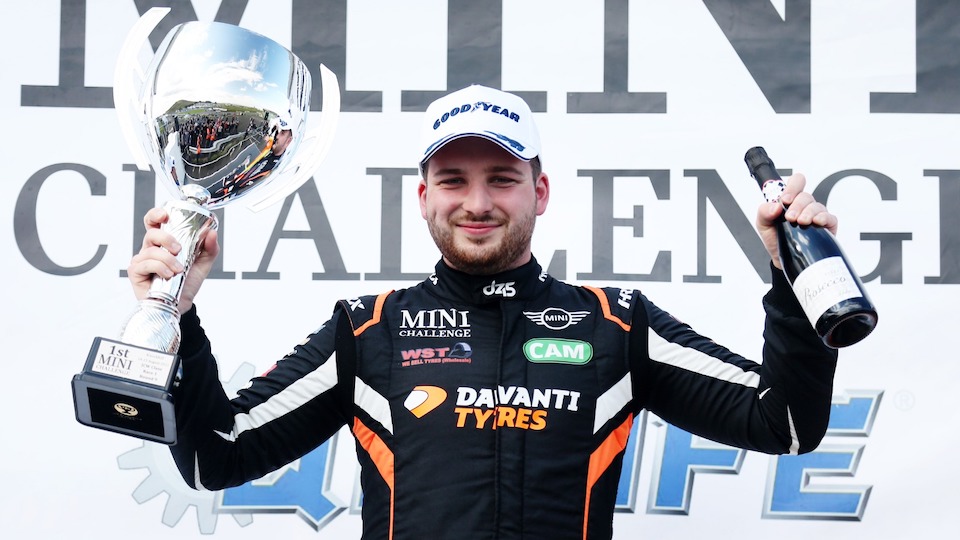 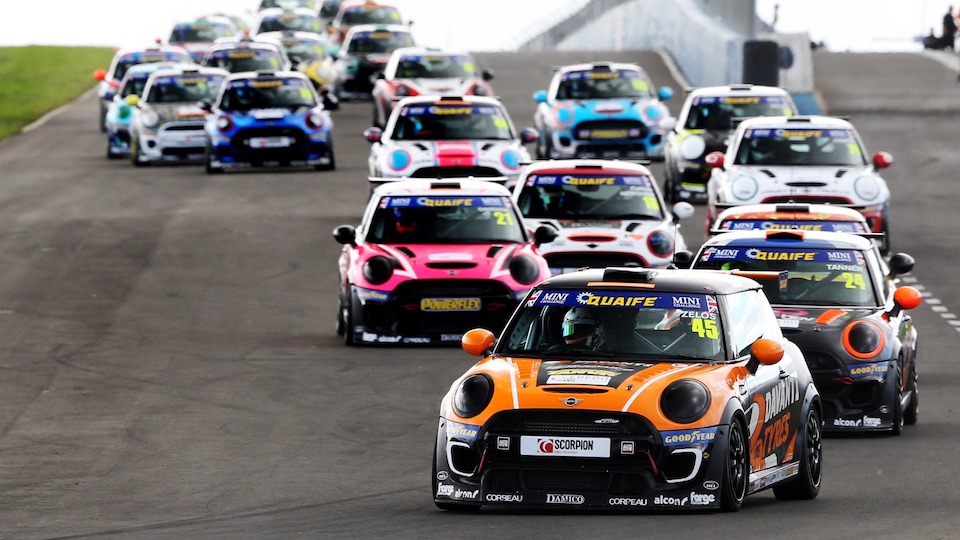 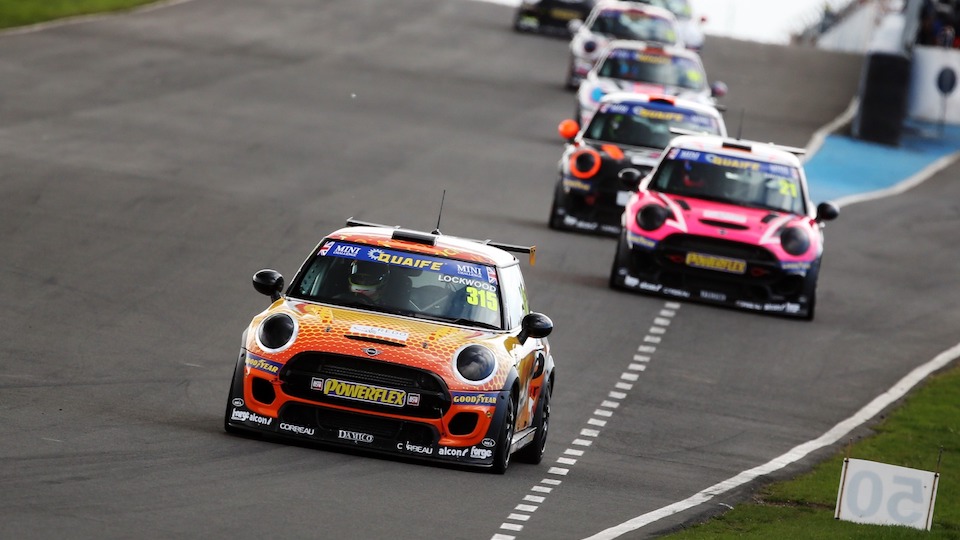 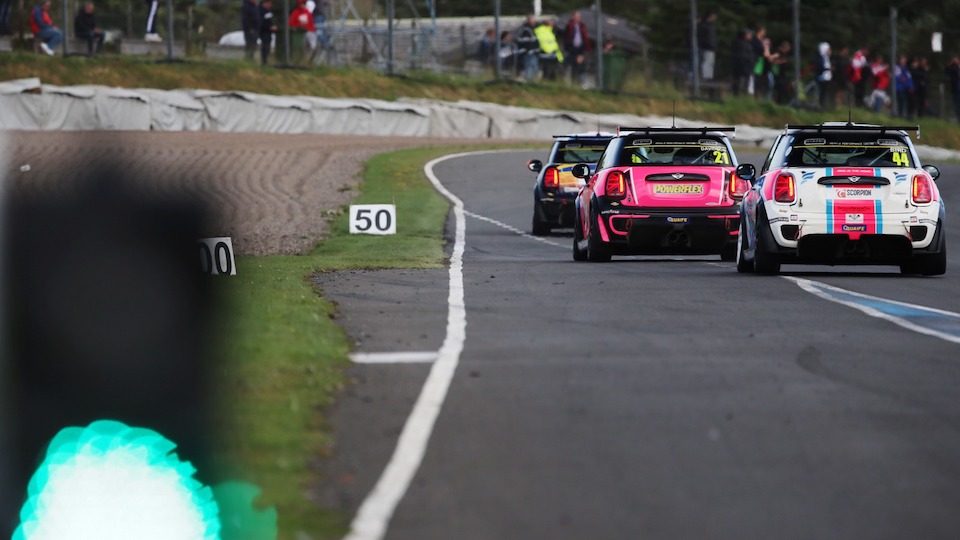