More than 6,000 people tuned in to watch the first round of the second season in the MINI CHALLENGE eSeries, and they were given a real treat.  With two races in store, the second a reverse grid top 12 it was action a plenty as the season got underway, virtually.

On his debut to the MINI CHALLENGE eSeries Mike Epps took pole position narrowly edging out fellow newcomer Robbie Stapleford, the two heading much of the qualifying session.  The second row was occupied by last seasons title protagonists, Jack McIntyre taking 3rd spot from Dave Marshall by just 0.015s.  Max Coates headed the 3rd row of the grid in his High Row Motorsport machine another hundredth behind.  Jordan Brennan was 6th.  In fact the full field of 27 drivers was separated by just over a second.

On the opening lap Dave Marshall edged out Jack McIntyre but it was Max Coates deposed by Jordan Brennan on lap two that really started the action at the front.  Coates lost 4 places falling back to the bottom end of the top ten.  Marshall made his move on Stapleford on the following lap with McIntyre following him through.  By mid-distance Marshall had caught Epps in the lead and with two mistakes in as many laps Epps lost the lead and fell back a second behind.  Marshall needed no further invitation and duly snapped up the first win.  McIntyre closed on Epps and passed for second as Robbie Stapleford regrouped to close in.  The youngest driver on the grid, Stapleford, couldn’t pass and had to settle for 4th.  In the latter stages Dan Zelos passed Max Edmundson for 10th place being followed by Josh Martin, it was Edmundson though claiming 12th and therefore pole for race two.

Race two started with a bang for Isaac Smith and Jordan Brennan, the pair getting together at turn one, Epps and Marshall both benefitting as a result.  Of the race one front runners it was McIntyre who struggled to make up ground, he eventually got caught out by others falling to 18th.  Epps and Marshall were on the move, by quarter race distance they were both into the top 8.  At the front Edmundson had escaped as Richards, Martin and Zelos battled it out.  Richards came out infront and began to chase the leader.  Down the order Coates, Stapleford and Marshall were battling, contact saw Coates out of control collecting Jordan Brennan who speared into the wall on the run up to druids.  He bounced back in front of Ethan Hammerton who, with nowhere to go crashed into Brennan, ending Hammerton’s race.

At mid-race distance Zelos began his attack on the final podium spot, battling with Josh Martin.  Martin got into a big slide falling back into the clutches of Marshall and Stapleford.  Epps passed Zelos for the final podium spot with 7 and half minutes remaining and set about closing the 3.5s gap to leader Edmundson.  Coates, Max Bird and Ryan Elliott were all battling for the final top ten spots, Coates passing Elliott and then hounded by Bird to the flag.  With the clock down to the final minute the top three were together.  Epps passed Richards at Clearways before Richards went round the outside of the pair at turn one.  Their battled opened the door for Epps as he passed to clinch the lead and set about creating a gap. Richards got second in the end with Edmundson third, Marshall passing Zelos on the final lap for 4th.  Robbie Stapleford rounded out the top 6.

Afterwards series leader Mike Epps, Ten Tenths Coaching, said “I’m really pleased to get a good result on the board to kick off the second MINI CHALLENGE eSeries. With the competition and prizes I’m taking this pretty seriously and was genuinely ecstatic with that Race 2 win. I really got a buzz I’ve not had for a while and can’t wait for the next.”

The action packed eSeries now heads to the Donington Park National circuit for the next round on the 23rd January.  Fans of the series can follow all the action on social media via the hashtag – #MINICHALLENGEUKeSeries and live streaming on the MINI CHALLENGE UK YouTube and Facebook pages which as per the real-world competition will be commentated on by Richard John Neil. 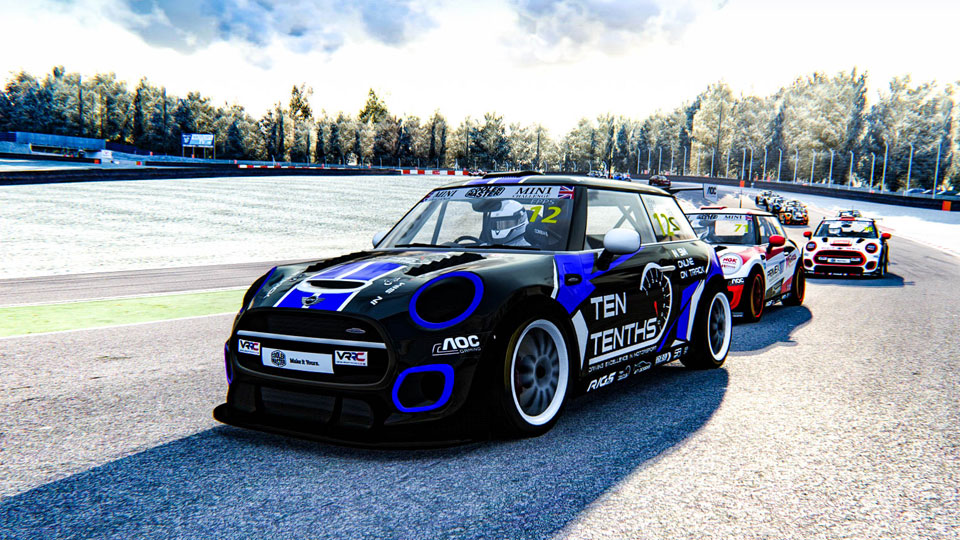