Isaac Smith came across the line in an extended second race at Snetterton. The Rookie driver was the class of the field in the second half, picking up his maiden Quaife MINI CHALLENGE JCW race win.

Two safety cars would interrupt proceedings, but Smith remained alert throughout to take a deserved first win. While in the championship, there was drama for Ant Whorton-Eales who failed to finish, leaving Nathan Harrison with a slim lead heading into the final round.

In front of the ITV camera’s, there was an unfortunate start for polesitter Brad Hutchinson, who had to pull off with a technical issue on the formation lap. This left Jack Davidson a free run to take the lead into the first corner as an early safety car was called to recover Matthew Wilson.

Cold tyres, compromised Davidson’s restart and after Ant Whorton-Eales pulled over with damage, Isaac Smith was left to lead the field away from Elite Motorsport’s Max Coates. After another safety car, Smith led them away as the cars looked to quickly build temperature.

Coates would not make it easy for the race leader, as Tom Rawlings made it a three car battle for the win in the closing minutes. The rookie would not faulter though, holding off the pressure from the #71 for his maiden overall victory in the MINI CHALLENGE.

Coates second continued to help his championship bid, as Rawlings recorded his second podium in three races to continue his impressive end of the season, also taking the honours as top Graduate driver.

The battle for fourth continued until the race conclusion as Davidson vehemently defended his line from championship challenger Dan Zelos. Despite the EXCELR8 drivers pressure, Davidson was not to be deterred, holding his line in part due to the yellow flags in the final sector.

Championship leader Nathan Harrison had gapped the leaders at the second restart, allowing him free air to set the fastest lap and further extend his lead with AW-E out of the race. He would jump one position to seventh on the final lap as he sneaked past Jason Lockwood on the run to line after the rookie dropped two places to Guest driver Oliver Barker and Harrison. However, in a post-race penalty, Harrison was penalised for gaining an unfair advantage. A 7 second penalty would drop him to 14th.

Eighth would go to Max Bird, disappointed to not repeat his qualifying performance, as Ronan Pearson, Lewis Brown, Callum Newsham and Robbie Dalgleish completed the top twelve. In the Directors Cup James Griffiths held on in front of Neil Trotter as his rivals failed to finish.

“I was a bit nervous on the restart as Max pushed me all the way on only my second-ever safety car restart, but it all went well, and I held on for the win. I made sure my head was in the right place all the time, holding Max behind me until the end. The rears were extremely cold, so the car was all over the place, a real handful, so to hold on for the win was a great achievement.

“We’ve had three second place finishes before, so this has certainly been coming. We can look ahead to next year, where we’re aiming to be at the front.”

Second place Max Coates was buoyed by his result;

“I’ve had a few races with Isaac over the break on the MINI CHALLENGE eSport Series so it’s not the first time we’ve come against each other, but he just had the measure of me today. My focus has been on race results and unfortunately this one wasn’t quite a win, but I’m happy to be here. Thanks to Primex Plastics and a few others we wouldn’t be here and I’m glad to be racing.”

“There were a few damp patches today, but all in all it was a great race. [With the safety cars] it wasn’t the ideal type of race, but we’ve now secured P4 in the championship, so I’m pleased with that.”

The final round of the JCW season will be at Brands Hatch on the 14-15th November. 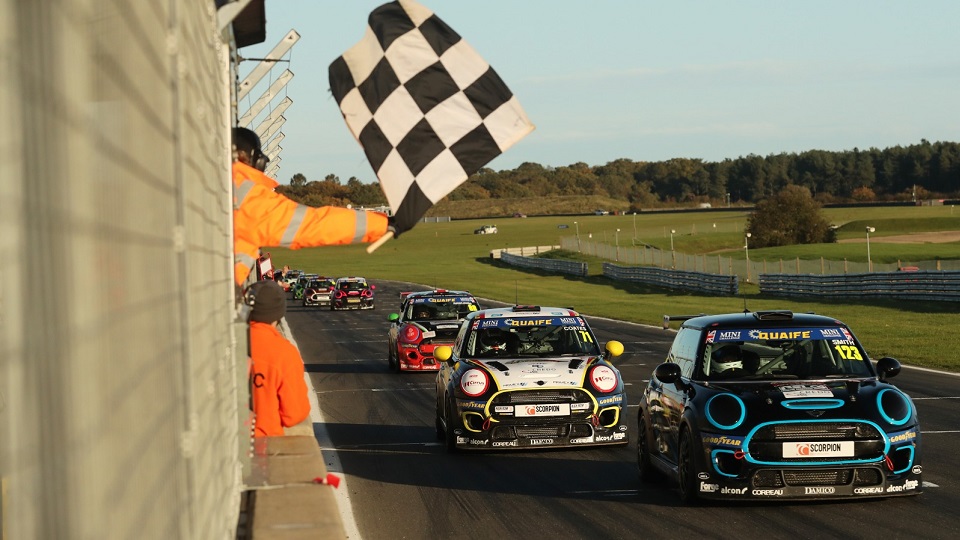 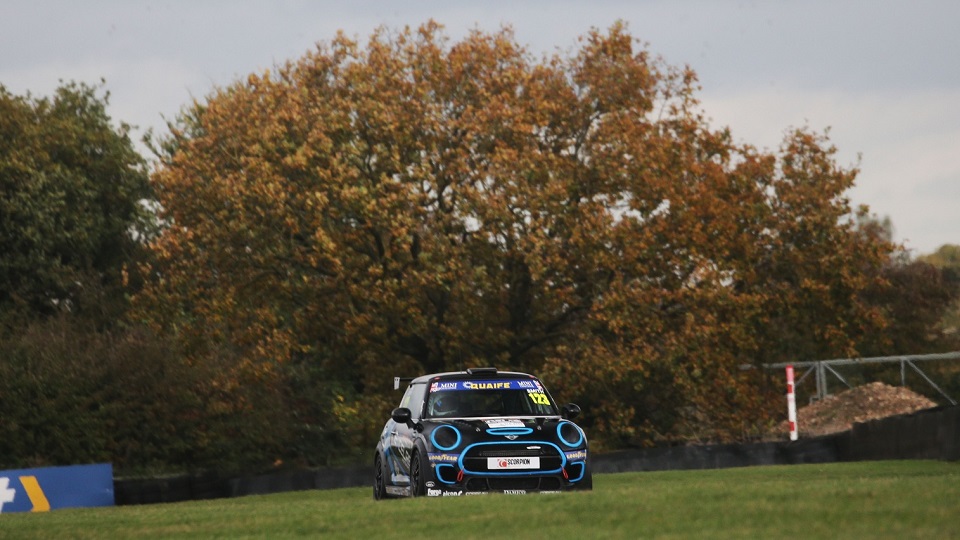 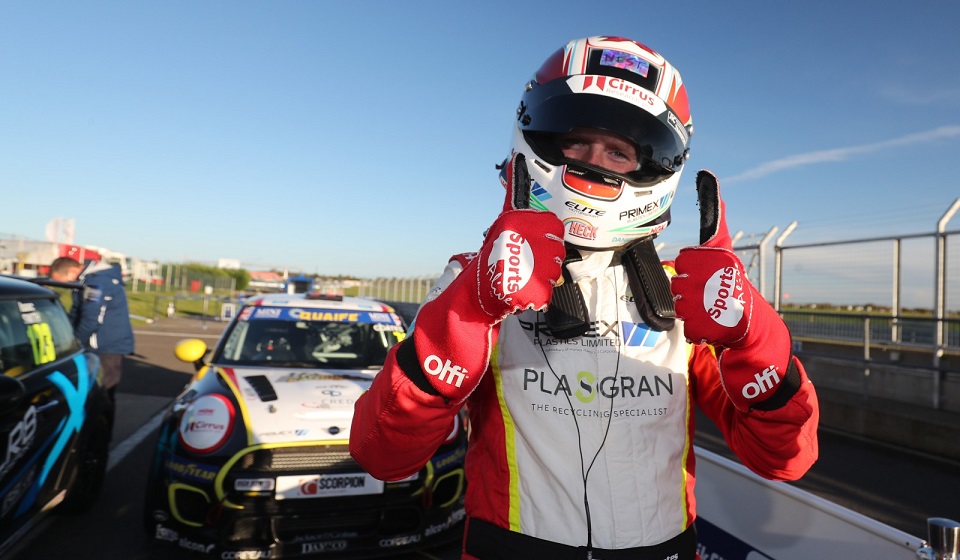 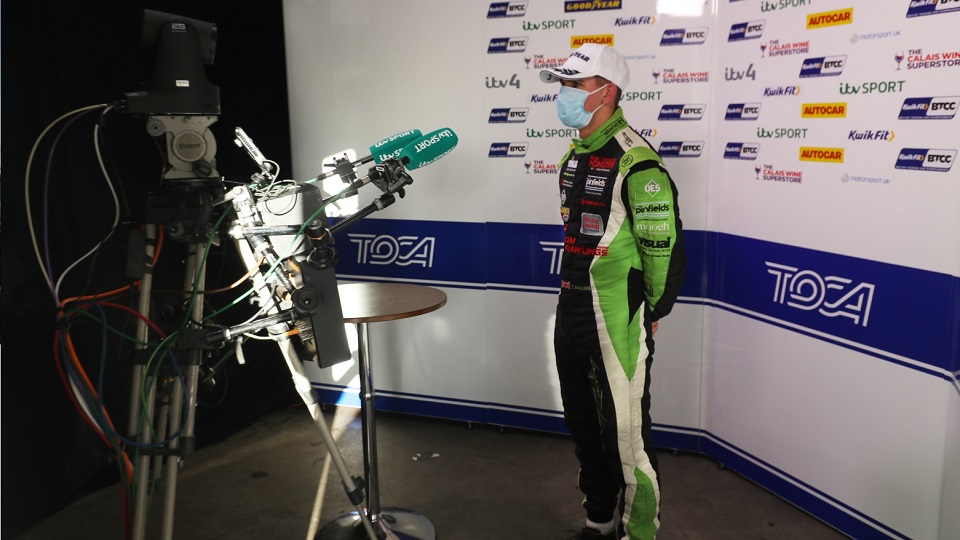