RACE REPORTS FROM THE COOPER CLASSES AT DONINGTON PARK

After the torrential rain on practice day teams were able to have their first dry run in this session. With the midday start, the track was considered Cloudy/Dry. Occasional damp spots just to test the run into the Craner Curves. A fast Donington circuit, just short of 2 miles was waiting for the 15-minute session. Enough time for 11 laps in the quicker cars. As expected the two front runners were playing ping pong with the fastest lap, Daniel Butcher-Lord was the quickest early on, Rob Austin came at his time, he took the fastest lap as the session was coming to it’s close. Daniel stayed out to put in a flyer of 1:20.045 to steal pole by 0.36 of a second. 1-0 for the R53’s. Behind these two, the returnee Andy Montgomery was giving Stuart McLaren a testing time but not just quick enough to take P3. Alan Lee, Keir McConomy, Sami Bowler and Steve Webb made up the rest of the grid. Eight cars are plenty for a great race later in the day.

Would it stay dry? Clouds were coming in from the east coast full of rain, the wind was also playing a part pushing cars around. Donington is a great circuit for slip streaming if you can get close enough to the car in front.

What a race, we had the pleasure of watching Rob Austin and Daniel Butcher-Lord fighting each other for the lead. Rob said after the race it was the best race of the year. Well, he did win it! Rob was very fast away from the lights out with Daniel close behind. Rob led for most of the race, finally being taken by Daniel with 2 laps to go.  Rob did not take that lying down and back in the lead for the last 2 laps to take the chequered flag by 0.4 of a second. Meanwhile, Stuart McLaren was having a great battle with Andy Montgomery until pulling into the pits after 10 laps, coming out again to score points with a finish. Andy was very pleased with P3. Sami Bowler was running with good pace but did not have the edge to take the race to Andy and finished P4. Alan Lee was still playing a waiting game, with Steve Webb a long way adrift and finished in front of Stuart after his visit to the pits.

Keir McConomy pulled into the pits on his last lap and did not take the flag.

A great race at the front and midfield, all followed with a happy Podium.

Rob Austin on Pole with Daniel Butcher-Lord next to him we were assured of a great race. A great start had Daniel get into Redgate first and he continued to build his lead to 3.4 seconds at the flag. Andy Montgomery stayed in 3rd place until Stuart McLaren slotted in behind Rob to 3rd place on the penultimate lap. Leaving not enough time for Stuart to take it back. Tyre choice was a big gamble for this race with the circuit having wet patches. Sami Bowler chose full slicks while others had a mix of wets and slicks or full wets. Sami soon decided that she had made the wrong call but stayed on the track while others passed her by. Apart from the action at the start and the overtaking by Stuart, the race became a little processional as they all wanted to finish without incurring damage. Keir McConomy coming into the pits after the second lap with cooling issues hampering continuation, not wanting to seize the car or blow a head gasket.

An uneventful race, all the cars were well behaved with all to play for in the final race.

Whilst waiting for the previous race to start, the heavens decided to open up. It rained and it rained, racing was impossible, standing water, visibility and the race due was the Historic Formule Ford, open-wheel and no roof. The rain was “Scottish”, torrential, or so I have been told. I was out in it too. It slowed after 15 minutes and then stopped. The Safety Car did a few laps and declared the track open. Off went the single-seaters. It ended early with a Red Flag. So the Cooper S’s were on.

Reverse grid down to P5 to mix things up as well as water everywhere. A race of attrition best describes it. Alan Lee on Pole and Andy Montgomery at his side. Next up was Stuart and Andy followed by Rob and Daniel, they were followed by Steve Webb, Sami Bowler and Keir McConomy. Andy Montgomery led away followed by Stuart McLaren; he was going well and set the early pace. Daniel put his head down and carved his way through the field with Rob close behind in a Master Class of wet driving. It looked like a predictable podium was coming and then on the 4th lap contact between and Sami and Stuart send then both of the track. Sami did not recover and Stuart pitted and then restarted a couple of laps down. Keir had his overheating issues again and pitted. Then there were six. Robs engine decided enough was enough and gave up, leaving Daniel to have a calm drive to the chequered flag, followed by Alan Lee and Andy Montgomery. Andy was chuffed with P3 again. Alan was pleased with P2 and Daniel was just relieved to not only pick up 50 points for the win but Rob had a DNF.

One more round to go at Snetterton, the class results will be finalised. 19th/20th October, mid-Autumn, a week before the clocks go back.

The Cooper class is buzzing. Both classes are hotly contested with some great race craft and enthusiasm. In the Pro class Robbie Dalgleish is the hot favourite but he can’t relax as Toby Goodman is only a few points away. With over 50 points for a win it is still all to play for. James Hillery put in some quick laps and pushed Robbie all the way, Robbie being a bit smart put in his quickest laps as the session closed. Alex Nevill finally got the monkey off his back with a great P2, all the more amazing as he had rolled the Car (AKA The Shark) in practice. James had to settle for P3 alongside Hannah Chapman.

Robbie is at times masterful, he leads from the lights out until the chequered flag. Toby Goodman made a great start but ran out of brakes himself and went tumbling down from P2 to P6 eventually getting back to P3 for another trip to the podium.

Alex Nevill was on form and stayed with them for most of the race. Taking advantage of Toby’s moment and took P2 and stayed there until the flag. Dominic Wheatley added a load more points towards the Rookie Cup with a P4. Hannah Chapman, James Goodal, Andy Mollison and Morgan Wroot followed them home. All nicely stuck together and displaying some great skill.

The Cooper class had Lee Pearce get the class lead on the 4th lap and he held onto it. Archie O’Brien had P2 after taking Michael Paul who retired. James Hillery pulled off into the pits after 3 laps leaving Josh Martin to pick up P3.

A few cars to sort out and prep for the morning race was in order.

After a good nights sleep cars all prepped and cleaned went out on their green flag lap. 2 laps as the track had changed due to weather conditions. Unfortunately Morgan Wroot had a coming together with a barrier. The race was put on hold while the recovery took place. 15 minutes and another green flag lap. A number of drivers took the delay as an opportunity to change tyres to wets from slicks. Robbie Dalgleish had his usual great start and went on into the lead with Tony Goodman close in behind, Lydia Warmsley, on the best tyres was in P3 and going well. Toby (P1) took the lead from Robbie. Lydia Walmsley (P2) Dominic Wheatley had P3 with Hannah close behind. Some great racing. A Saftey Car was deployed after James Parker visited the gravel at the chicane. This took 2 laps out of the race. Robbie appeared to make a rare mistake and went off a bit tumbling down to P6. Hannah was P4 followed Andy Mollison in P5.

In the Cooper class Lee Pearce again on top form lead the class and stayed in front. Loving the conditions, Lawrence Harris had a great drive in P2 and Andy Langley in P3. All hoping the weather stays dry for the last race

Reverse grid down to 4th place, with Andy Mollison and Hannah Chapman on the front row in Pro class. In Cooper class Josh Porter and Archie O’Brien had the front row.

Toby Goodman was on a roll. It took just 2 laps for the lead to be his after a great battle with Hannah Chapman. She had a near spin and took a few places to recover. Robbie made it up to P3 as James Hillery surged through from P6 to P2. A few changes further down the field. Hannah decided to retire as did out of luck Adrian Norman and James Goodall. Archie O’Brien had the class from the start as Lee Pearce just could not find a way past, Lawence Harris was also getting between them, Lee is a great racer and soon took the place back. So lots of battles going on. In the end it was P1 again for Toby Goodman, what a great weekend and haul of points. P2 for James Hillary and P3 for Robbie Dalgleish in the Pro class. In the Cooper class P1 for Archie O’Brien, P2 for Lee Pearce and P3 for Lawerence Harris. Some consolation for Hannah she took the fastest lap of 1.32, had she have kept that up ……..! A great weekend for AReeve Motorsport, ExcelR8, Dankan Mini shop/HW Racing, Norfolk Cars and LDR Racing, all have success over the weekend. 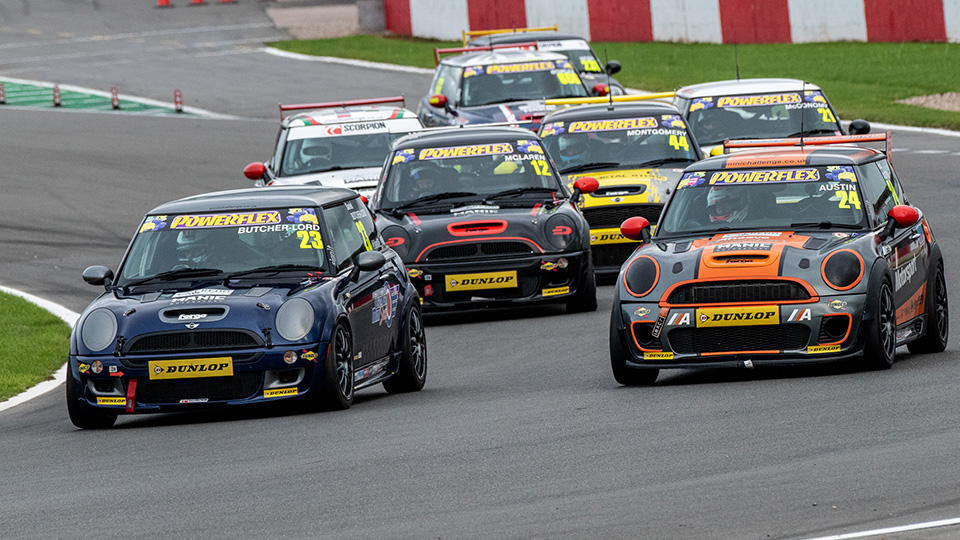 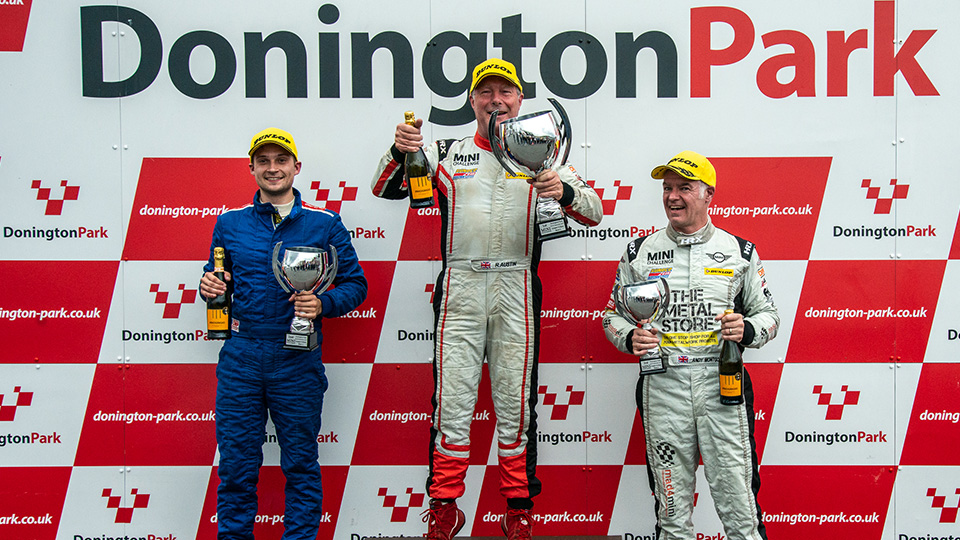 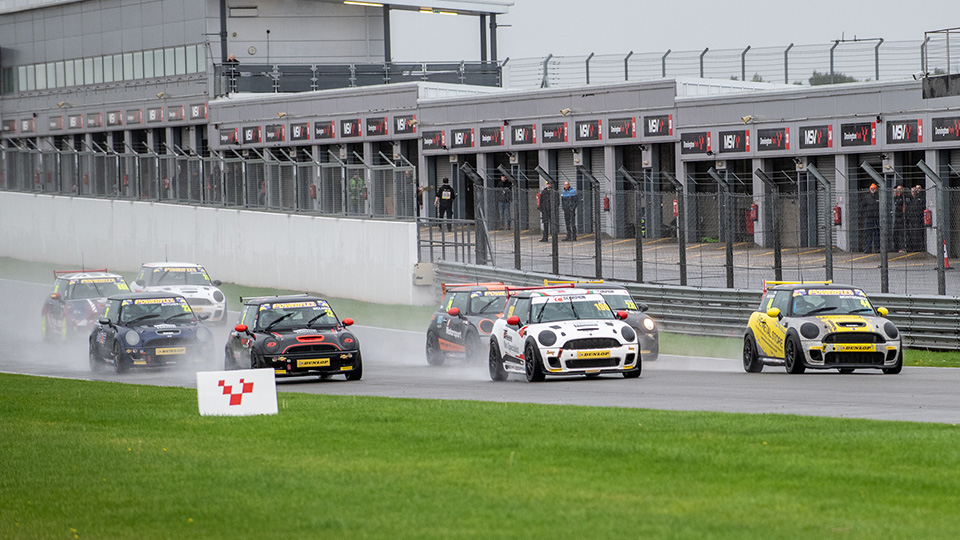 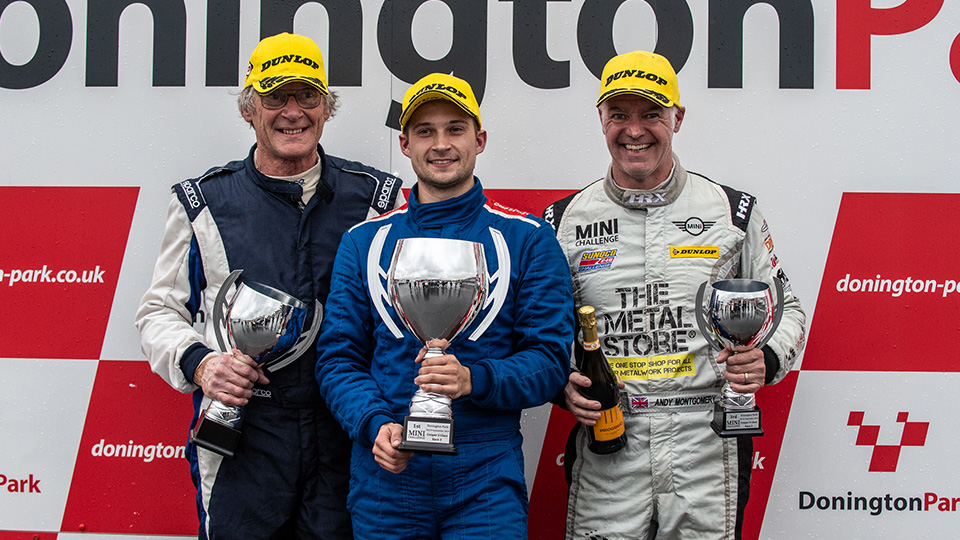 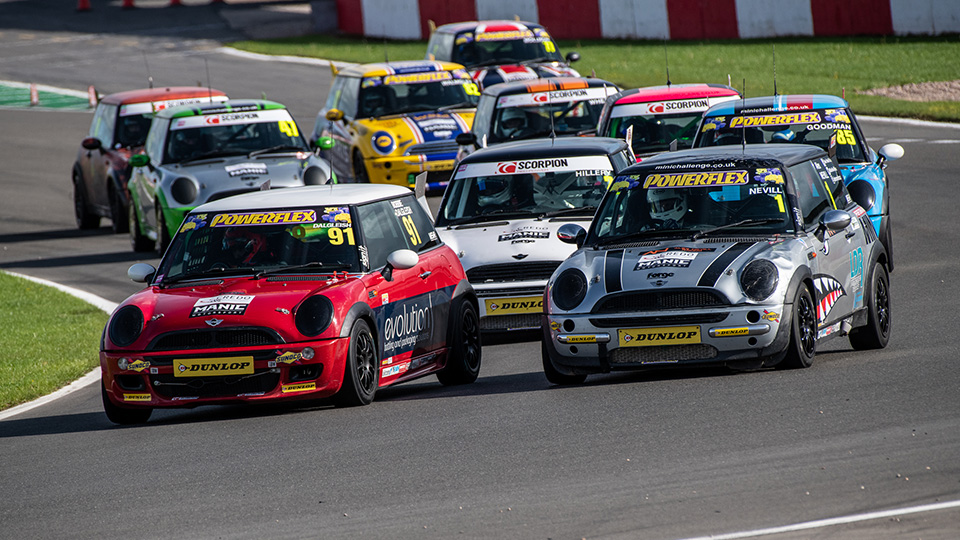 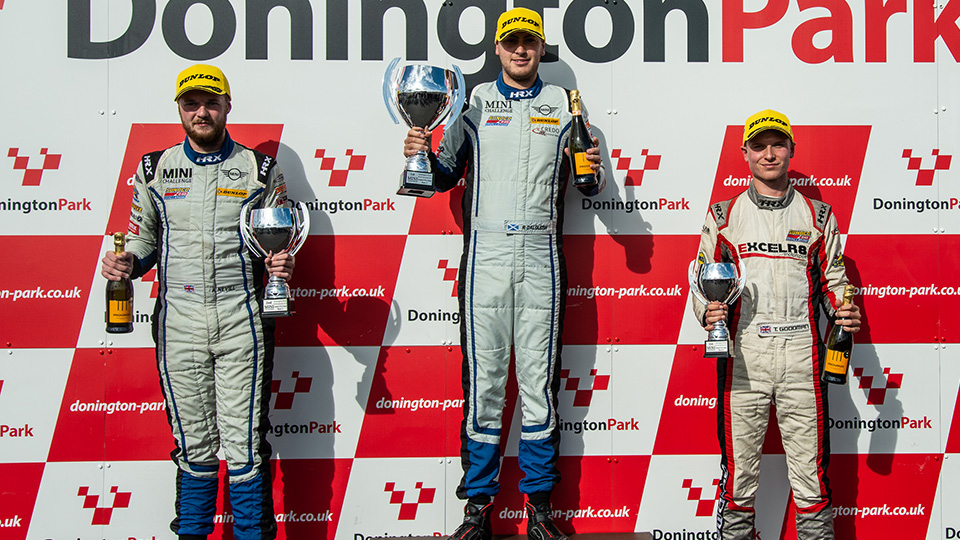 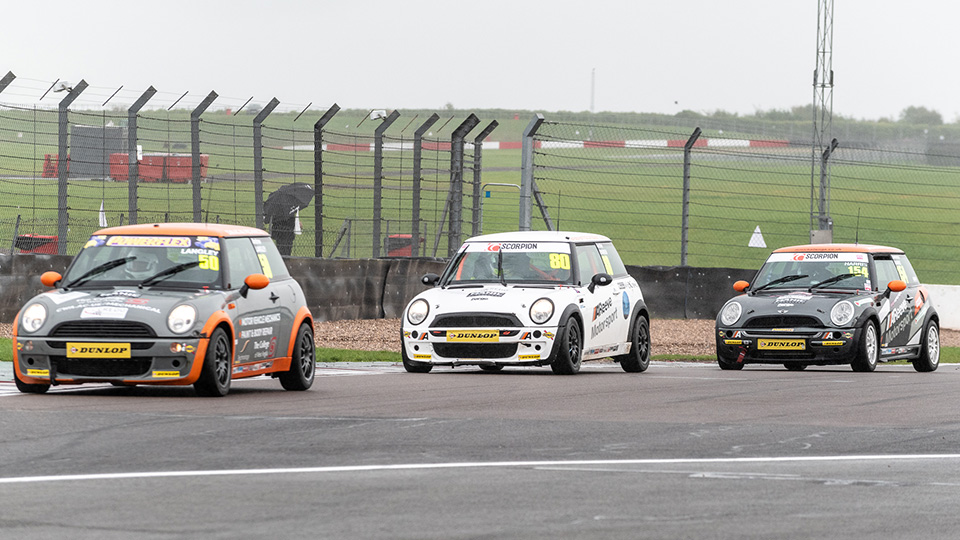 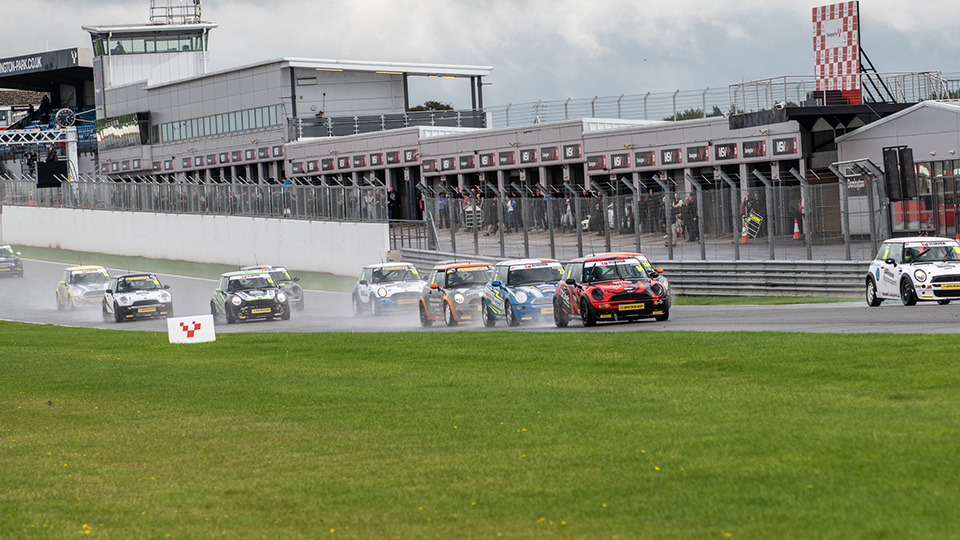 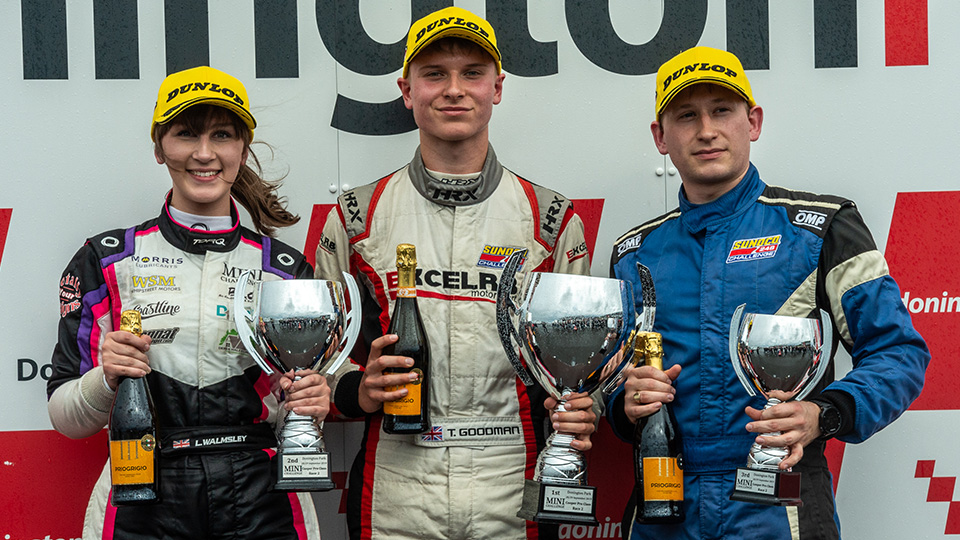 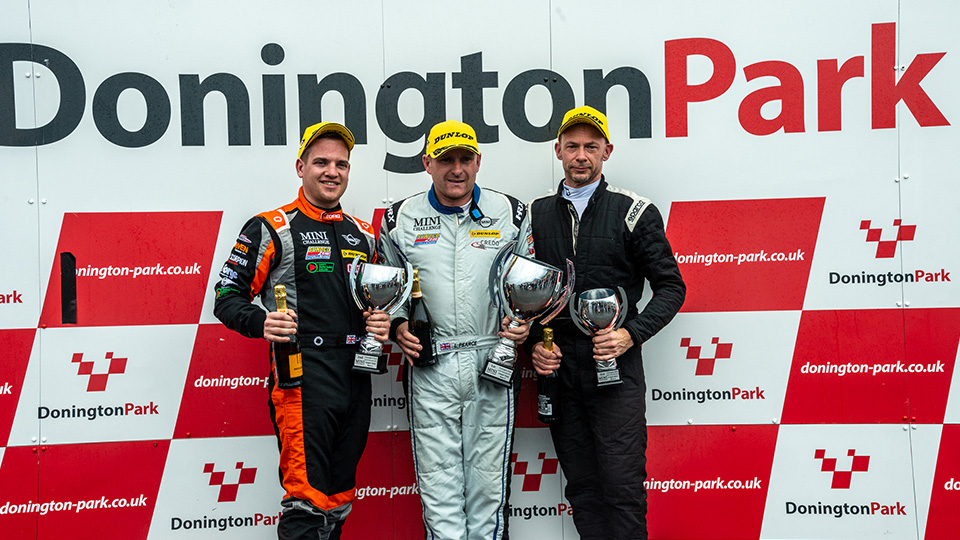