10 am bright and dry and the famous mountain awaits the 7 Cooper S class cars. R53s and R56s all with slicks and 160BHP per ton. The usual stuff but this time Keir McConomy was on fire and set the quickest time initially. Rob Austin came onto the track quickly and stayed quickest for the next 2 laps. Then came the R53 of Daniel Butcher-Lord. They decided to play tag for a bit. Stuart McLaren was having a good run, despite having the front of his car realigned after a visit to the barriers in practice, he was clearly having issues with turn in. It was these guys who made the top 4 followed by Sami Bowler, Alan Lee and Steve Webb. Rob Austin made pole position by 0.25 seconds from Daniel who was 1.8 seconds in front of Stuart who very nearly got caught by Keir who was still having a great run. 8 laps were achieved in the allotted 15 minutes. All to play for in the first race.

What a first race! Rob Austin on pole position had a great start, into Coppice for the first time. Daniel was in hot pursuit mode followed by Stuart McLaren and Sami Bowler. There were 2 races going on. Rob with Daniel and Stuart with Sami. On the 3rd lap Sami got the better of Stuart after some very late-breaking going into the “The Mountain”. Nice move. She overcooked it in 3 laps time and paid the consequences, P3 to P5. Stuart said thanks and he went up then down to P4 as Keir McConomy playing a waiting game pounced for P3, he was not giving that place up. Meanwhile Daniel had squeezed past Rob and was pulling away. The whole field bunched up again just before the chequered flag with P1 for Daniel, P2 for Rob and a well-deserved P3 for Keir. Rob Austin getting the quickest lap at the flag.

Reverse grid time. Sami Bowler in Pole Position with Stuart in P2. Row 2 had Keir and Rob, followed by Daniel and Alan Lee, Steve Webb taking up the rear. It all became a little tame when Daniel had a great start along with Rob. Daniel just stormed into the lead, followed by Stuart and then Sami. They stayed that way for the whole race. Nice to watch but very little wheel to wheel stuff that we normally see from this class. Daniel won by a margin of 9 seconds along with the fastest lap, from Rob who was 3 seconds clear of Stuart who was another 9 seconds clear of Sami. Still a nice podium of Daniel, Rob and Stuart. Until Donington when we all meet again.

Eighteen cars, nine in each class. This was the “star” turn of the day. Lots of experience, raw speed and old scores to settle. In the Pro class Robbie Dalgleish, class leader and Sunoco 240 leader had it all to lose with Toby Goodman and Hannah Chapman having it all to win. James Hillery and Alex Nevill both needed a bit of well overdue luck.

In the Cooper Class Josh Porter and Lee Pearce continued their battle with Paul Manning determined to hang onto the class lead. 13 cars had 1 or 2 laps disallowed for exceeding track limits. That shows how tight the circuit is and how hard they were all trying. Great to watch as P1, P2 and P3 in each class kept changing. Toby got pole on the 8th lap, Hannah got P2 also on the 8th lap and Robbie P3 also on the last lap. Having had 4 laps taken away for track limits. It was all a bit close at the top.

In the Cooper Class Josh Porter finally got P1 away from Lee Pearce on the last lap. Lee was quick at the start of the session but went off the pace as the session progressed. Saving Tyres? Perhaps. Josh Martin and Archie O’Brien were the star performers with P3 and P4. The whole field was very tightly packed. A great race was indeed promised later in the morning.

What a race, what a start, so much going on. The race commentators were struggling to keep up too. 4 cars from each class just had the greatest of starts. All going into Coppice side by side. There was going to trouble! Both classes all made it through with just the little bit of running onto the grass. By the time they came to “The Mountain” they were all like a big snake. Toby followed by Hannah followed by Robbie. Next lap and they had changed, Robbie followed by Toby followed by Hannah. James Hillery also trying to join in. Alex Nevill having a couple of grassy moments went down the field, setting some great times on his way back through the field. All great fun to watch. Halfway through, Toby got the lead back with a very smart dive on Robbie, who with too much to lose did not bite back, settling for P2. James Hillery meanwhile got the best of Hannah and had a great P3.

In the Cooper Class it was equally as exciting. Another snake of 5 cars, Josh Porter, Lee Pearce, Josh Martin, Paul Manning and Archie O’Brien. They started and a solid lump of 5 cars and all strung out into a snake by the time they all got to “The Mountain”. They all had a great race, little taps and firmer nudges were the order of the day until they all settled down for another great display of ultra-close racing. Lee Pearce taking the win from Josh Martin and Josh Porter, Paul Manning scoring good points in P4 from a charging Archie in P5.

It does not get much better than this display of MINI CHALLENGE racing.

“Top that,” they said, Top that they did. The reverse grid really stirring things up in both classes.  After a great start from Hannah and Robbie, these two were the stars of the show. Neck and neck for the first half of the race, switch positions and neck and neck for the rest of the race. Robbie taking the win from a very happy Hannah. Toby had to settle with P3 as the top 2 were clearly having their own race. Dominic having a great P4 and James Goodall in P5. The rest of the Pro class had a few grassy moments and a little too much bruising, but they all made it to the flag.

The Cooper Class had another great display of great racing from the whole field. Very equal with the narrow track being shown respect for both the cars and the cheque books. Josh Porter took the lead in the class on the first lap and there he stayed. Very closely followed by Lee Pearce and Archie O’Brien for yet another visit to the podium. Josh Martin, Michael Paul, and Paul Manning making up the top 6 places. All very closely matched as they crossed the line.

The end of a great display of great racing. What was noticeable is that there was not a single DNF the whole day. Driving Standards was indeed very high. Congratulations to all the teams and drivers. 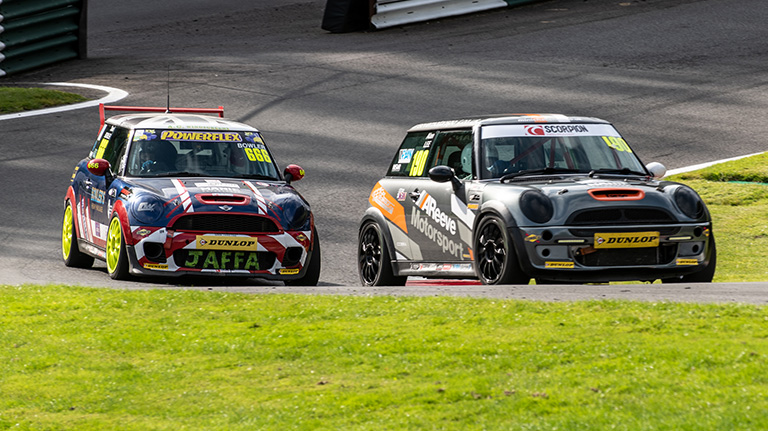 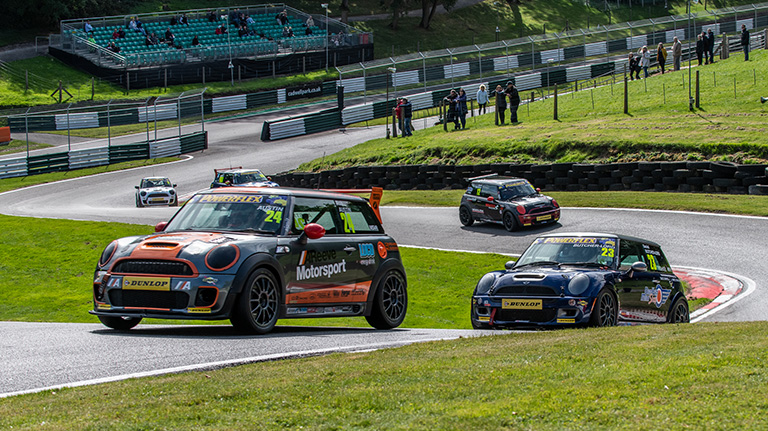 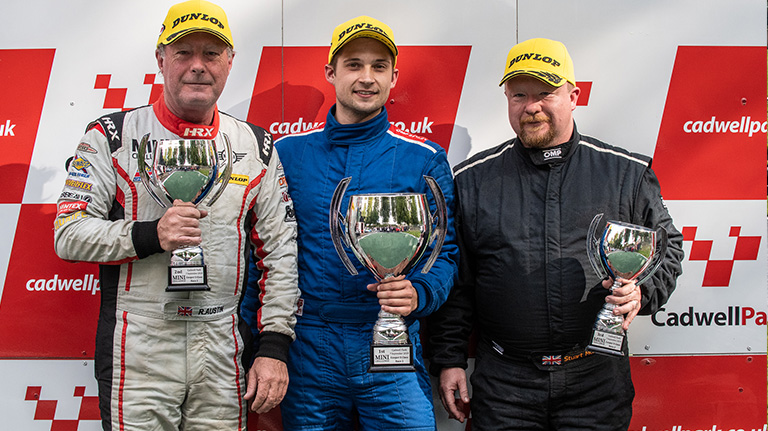 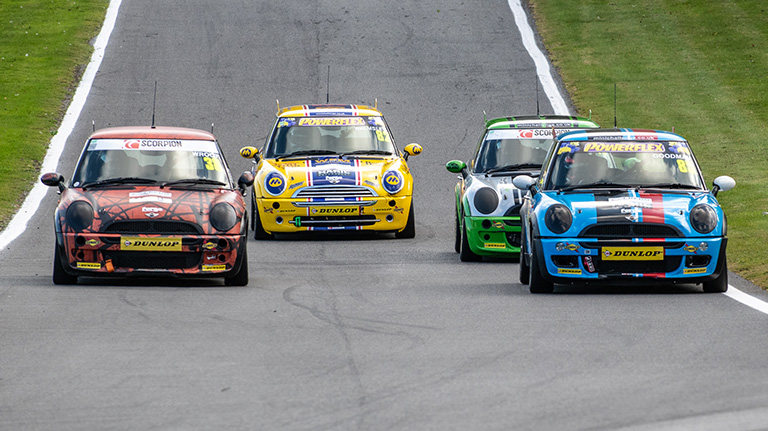 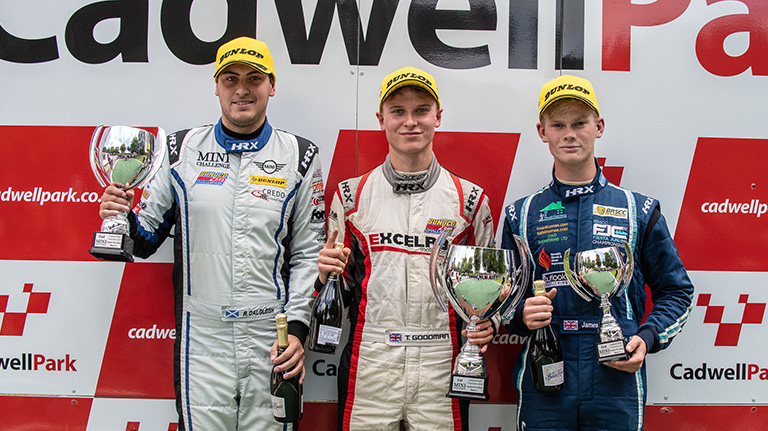 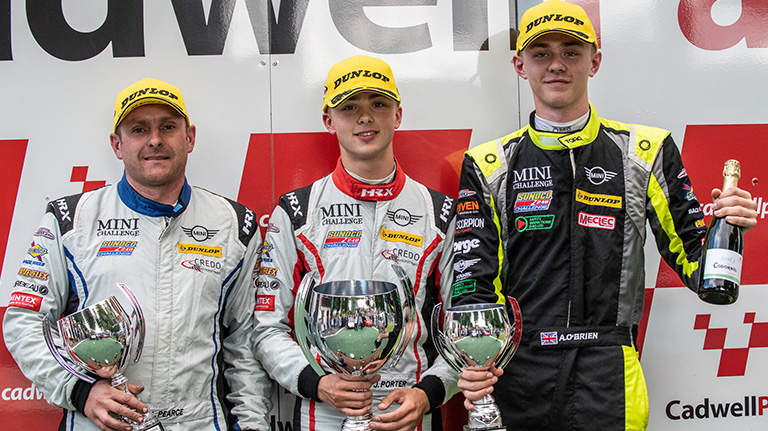 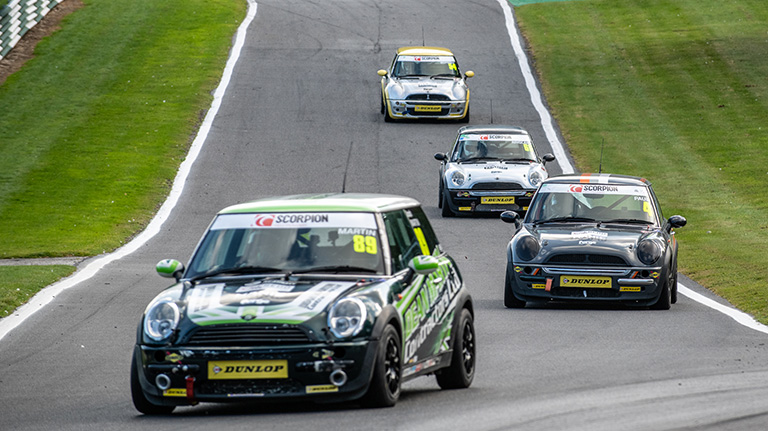