After the wet weather on Friday, this morning’s session, which included all the Coopers, Pro and S cars, was the first opportunity to set up their cars for dry running and work out dry lines. For most, this was their first time at Croft. An amazing circuit located just outside Darlington. The sun was shining too!

Robbie Dalgleish the class leader, this being a local circuit for him, made the most of it, P1 was his in the Pro Class, his first pole of the season,  he was closely followed by Lydia Walmsley in P2 and Dominic Wheatley P3. Less than 0.5 of a second splitting the first 8 cars.

In Cooper Class Lee Pearce, still excited about being World Stock Car Champion, put his car on pole. P1 was his.  Paul Manning, the current class leader was close behind in P2, with Josh Porter in P3. Michael Paul started off what was to be a great weekend with P4.

The “S” class cars, few in number but highly competitive, had a great battle for P1. Chopping and changing throughout the session, keeping the Pit crews on their toes constantly changing pit board numbers. Rob Austin finally made it, P1 in his R56, 0.03 sec ahead of guest driver Oli Mortimer in his Scottish Mini R53. Class leader Daniel Butcher-Lord had to settle with P3. Sami “Jaffa” Bowler was pleased to get P4 from a disgruntled Stuart McLaren in P5.

In the Pro Class, Robbie Dalgleish had a superb start, off he went into the first bend, Clervaux, he stayed out in front for the whole race. Behind him, Lydia Walmsley stayed firmly in P2 while the rest of the class were having a great race. Morgan Wroot, Toby Goodman and James Hillery were changing places all the time. You a get a great tow on the long straights, slipstreaming was the order of the day. Hannah Chapman started P6 and ended P5, more to come in Race 2? Dominic Wheatley setting the Lap Record and managed to stay on the track for a P8. Alex Nevill had a great fight but had to retire with a tyre going flat.

The Cooper class was equally as exciting. Paul Manning, Michael Paul, Josh Martin, Lee Pearce and Archie O’Brien were all chopping and changing, Paul Manning setting the lap record on his way to the chequered flag and class win. Michael Paul in P2 for his first trip to the Podium, Josh Martin joined him on P3. Lee Pearce hat to settle for P4, prior to going stock car racing in the evening!

Only 7 cars on the grid, tons of talent. The unknown was the performance of Oli Mortimer, a past MINI CHALLENGE class winner in 2009. 15” wheels and a Scottish Minis specification R53 car. He was being joined with Angus Tosh in a freshly built Scottish R53. Sami “Jaffa” Bowler was hoping to get another podium starting in front of Stuart McLaren. The start had Oli quickly away but not as quick as Rob Austin. Very determined, he lost the lead after the first corner but took it back on the 2nd corner and just pulled away. The race was centred around Oli and Daniel both in R53’s Daniel had P2 until the last lap when Oli took him after a wide entrance into Sunny In. Oli said afterwards “ I am happy with P2!”. Lots of smiles on the Podium. Stuart got the better of Sami, Keir McConomy got a 5-sec penalty for track limits.

19 Coopers all lined up for the start. Reverse grid mixed the front runners up In both classes.

In the Pro class, Toby Goodman and Morgan Wroot had a great battle, Toby leading from the front and Morgan out in front from the 3 lap only to lose it on the 8th lap. Lydia was having a rough time in the gravel. Robbie was not having things his way either. The front of his car covered in grass and gravel. Alex Nevill was storming through the field from the back to finish in P6. Dominic Wheatley was the star of the class climbing through the field to take a well-deserved P2 from P8. Morgan Wroot starting in P2 and finished in P3. “I will take that”. Robbie had to contend with P4. Still a great haul of points.

In the Cooper Class, Michael Paul had a moment and went for Hero to zero on the first lap. Though he did recover to take P13 and 5th in class. Josh Porter was on fire making up 5 places in the first couple of laps to finish out in front for the class win. Lee Pearce had a great run, leading the class until the last lap when Josh took him. Archie O’Brien had a great battle and kept his head to secure his first trip to the podium in P3. Josh Martin in P4 and a recovering Paul Manning in P5. 4 retirements James Hilary, Adrian Norman, Andy Ringland and Mark Cornell. The end of a great race, lots of cheering, hugging and back-slapping. Robbie picked up the Sunoco fastest driver of the weekend. Cadwell Park, here we come.

And then there were 6. Blown engine. Keir McConomy did not start. Reverse grid basically turned the whole field around. Rob Austin was determined to make a race of it with Oli not scoring any points, (Guest driver) and Daniel Butcher-Lord wanting the top step of the podium back. Lights out and Oli raced off into the lead. Sami “Jaffa” content to let Daniel, Oli and Rob go off into the sunset. Oli had a battle with Daniel until he overcooked a bend, too late braking, and ended up doing autocross at Tower Bend. Unfortunately, he snapped a belt and was forced to retire. Leaving Rob to take his time and pass Oli for the leed. Sami and Stuart McLaren were having a great race until Stuart’s car broke a driveshaft to end his race. Angus Tosh was happy to pick up the pieces with P4.  So Rob was P1, Oli P2 and Sami P3.  Top-quality racing on one of the best circuits in England for spectating and racing. 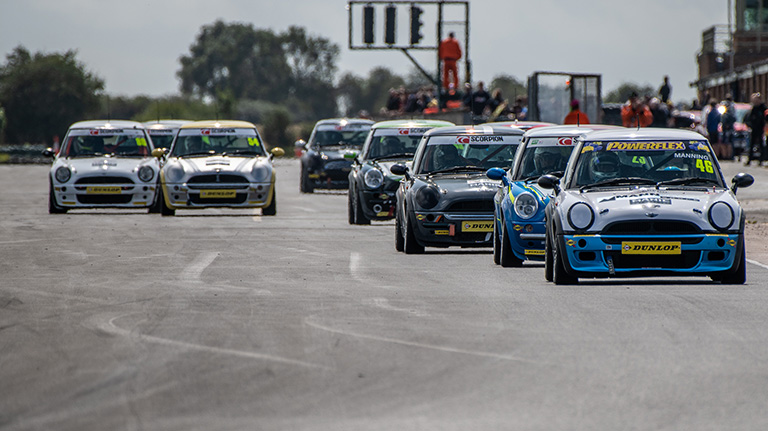 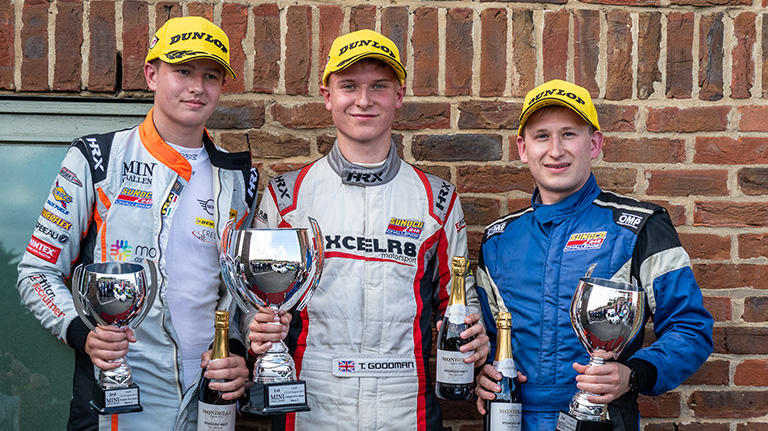 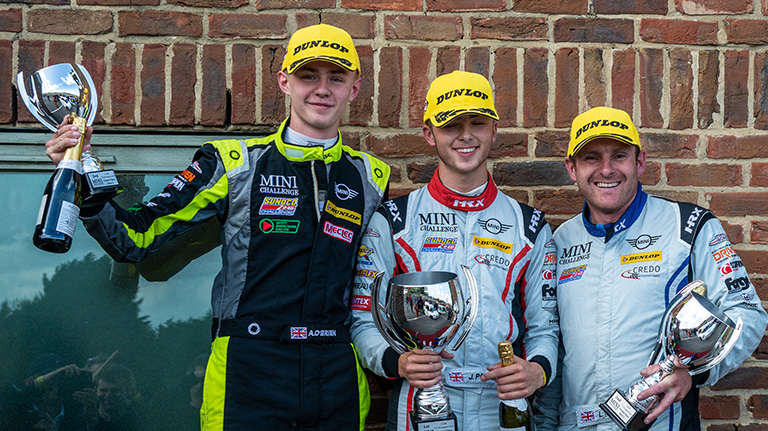 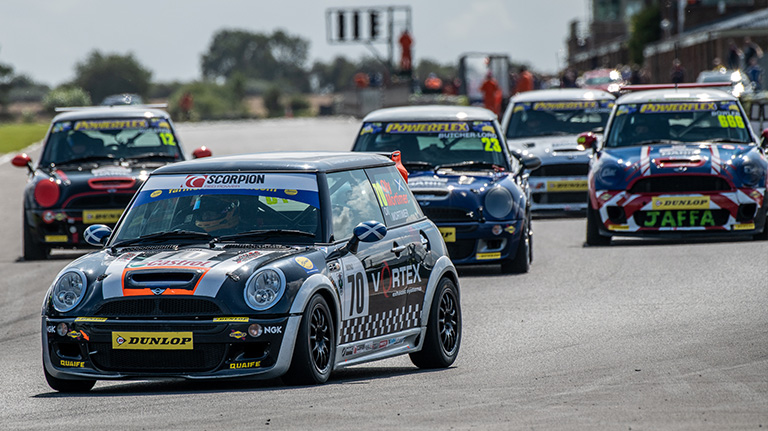 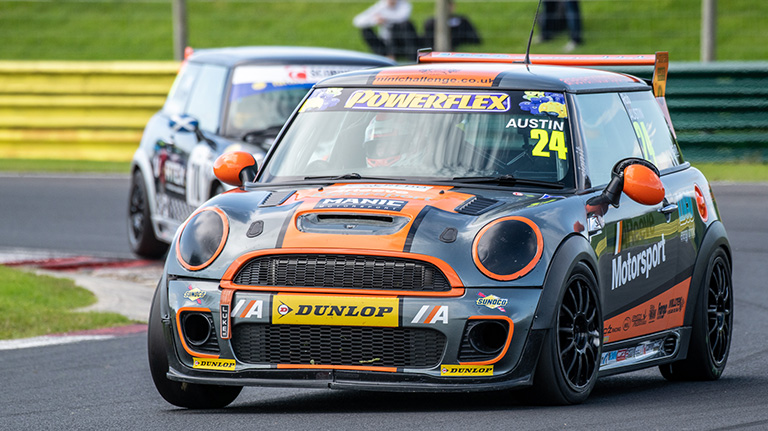 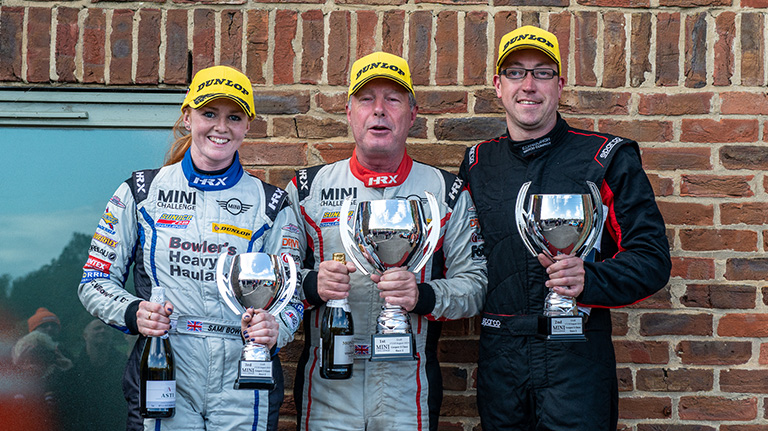