After two battling performances across the Brands Hatch MINI Festival weekend already, Ben Palmer finally hit top spot in the finale to secure his third win of the season, while Nathan Harrison recovered from early troubles to consolidate his championship lead.

Having led race one until his off, and played a starring role in the lead pack during race two, Palmer was finally rewarded with the result he deserved from a highly competitive weekend when he controlled the final outing of the weekend from the first lap to the flag.

After his difficulties at Donington Park, where he struggled with a down-on-power engine, Palmer struck up a working relationship with the JamSport team. While he still runs his car independently, he now has access to setup advice and support from last year’s title-winning team. On the basis of the Brands weekend, the partnership will be one to watch over the rest of the season.

The reversed grid handed Rory Cuff pole position, ahead of Lewis Brown, Palmer, Dan Zelos, James Gornall and Harrison. However, that order was shuffled when Brown was forced to pull his car off the grid with a driveshaft problem before the start. The Lawrence Davey Racing team worked wonders to fix it and get him back out. A fine drive from the back then on got Brown back to 17th, but his hopes of a podium or a win were gone.

That also left Zelos with a clear run ahead into turn one, but it was Palmer everybody really had to watch out for. With his car set up to come on strong early into the race, Palmer bolted from row two to run around the outside of Cuff as the poleman braked a bit too conservatively into Paddock Hill Bend.

With Palmer established out front, Cuff didn’t give up and hounded the leader over the opening laps, with Gornall and Zelos close behind. But trouble broke out behind the top four. There was contact between Harrison and James Loukes out of Graham Hill Bend, which delayed both cars, with Harrison slipping back to eighth after losing momentum on the straight.

Harrison regrouped to pass Loukes at the second time of asking on lap two, and so began his comeback. First he slipped past Tom Rawlings on the brakes into Paddock Hill, before pulling off a similar move on Jack Davidson after getting a good run out of Clearways. A series of fastest laps then put him onto the tail of title rival Gornall, who appeared to be struggling for grip in the final race. Harrison took his chance to run around the outside at Druids before snatching fourth in the entry to Graham Hill Bend.

“I really didn’t expect the tangle at the start and it really could have cost me badly, so I was lucky to get on the brakes and we both avoided going off completely,” said Harrison. “From then on my steering wheel was offset and the tracking was out, so to set fastest lap with a bent car is pretty great actually! I needed to pass James for the championship, and I’m so glad I managed to get the move done.”

Gornall admitted: “The car just wasn’t very good in that one, and we have to find out why. I was struggling for grip and got hit a fair few times, so that may have contributed I guess…”

That fight may have captured much of the attention, but up front Palmer was imperious, pulling a second clear of Cuff and Zelos – and even surviving a brief safety car period – to secure his third win of the year, tying him with Gornall and Harrison on a hat trick of wins apiece.

“I reckon that’s a bit of payback for me putting myself off in race one!” Palmer beamed. “I got a great run at the start and just had so much confidence, so when Rory braked a bit early for the first turn I just instinctively went to the outside and made it stick. I was a bit gutted to see the safety car, but I pulled a little dummy on the restart and got the gap back, and from then I just didn’t look in my mirrors much as I didn’t want to jinx it!”

Cuff held off race-long pressure to secure his first – and long overdue – JCW podium finish in second. “That feels so good,” he said. “It’s been a long time coming. I’ve always had the pace in qualifying, but it just takes time to develop that into race pace and this weekend I was so determined. I thought I got a good start, but it just wasn’t as good as Ben’s, and perhaps I was just too cautious into turn one. But after that there were times when I was catching Ben, and then Dan would close in and I’d have to defend. The last lap was really stressful, but I’m delighted to get on the podium. Now I’m here, hopefully I can stay around for a few more.”

Zelos completed an incredibly consistent weekend with a third podium. “I’m really happy for Rory – he’s worked so hard for his first podium, but I still wanted to pass him!” he laughed. “It’s been a brilliant weekend in terms of points, but as good as being on the podium is, I do want to start winning soon. But the whole MINI UK/EXCELR8 team has done a great job this weekend and the car has been on rails.”

Davidson capped his weekend with a sixth place, ahead of Rawlings, Loukes, Brad Hutchison and Harry Gooding. One of the star performances further down the order came from LDR racer Max Bird, who rose from 20th on the grid to finish 11th after a terrific overtaking display. Jac Maybin, too, made great progress to net 12th from 21st on the grid. 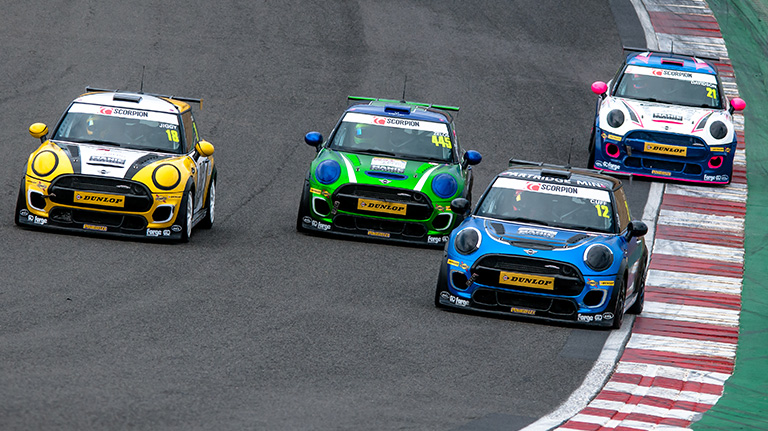