After losing out to James Gornall in Saturday’s opening MINI CHALLENGE JCW event, Nathan Harrison fought back to take a controlled victory in the second race of the Brands Hatch MINI Festival, and with it moved back to the top of the championship.

The points lead changed for the second time in as many races when Harrison managed to capitalise on a first-lap sort-out between Gornall and Dan Zelos to inherit a lead he’d never lose in what was a cagey second outing in Kent.

Harrison started third on the grid, and got a good launch to hold the place into Paddock Hill Bend as the two leaders – Gornall and Zelos – ran together, side-by-side through the first turn. And that set up perhaps the race’s defining moment.

Gornall hugged the inside line at Druids, while Zelos attempted the favoured attack around the outside, which if successful would give him the inside line for Graham Hill Bend. However, as both cars turned into the apex of the hairpin, the rear of Gornall’s car slid wide and touched Zelos’s rear wheel, pushing him out wide. Both cars managed to avoid a spin, but both were delayed and Harrison picked his moment perfectly to sneak past both for the early race lead.

Once in front, Harrison defended hard from Gornall before finding his rhythm and edging the best part of a second clear, as a four-car train formed behind him for second, with Gornall having to fend off Ben Palmer, the recovering Zelos and Lewis Brown.

A short safety car period – called to clear the stranded JCW of James Griffith from Surtees corner – threatened to derail Harrison, but he controlled the restart perfectly, bolting early on the exit of Surtees to immediately regain his advantage, before pulling over two seconds clear at the flag.

“I really needed that result, and I definitely got a bit lucky at the start, perhaps I was being paid back for the bad luck at Druids yesterday!” smiled Harrison. “Once I got ahead I just had to concentrate on keeping things clean. The safety car did ruin the rhythm a bit, but it’s also quite nice when you’re leading as it gives you a break and also gives you full control to dictate the race. I wanted to get going early to try and catch James napping as any time I have a chance to beat him I really have to take it.”

Gornall shadowed Harrison home for second but, after the race result and fastest lap bonus points were applied, now trails by just eight points in the title chase. “It was a tough race and the start was so close. Dan got a great run on the outside of me into the hairpin and I had to defend hard, but then the rear got loose and we touched and Nathan managed to slip past. It was just one of those things. Then with the safety car Nathan got on the power probably only a tenth of a second sooner than me, but it opened that gap up and there wasn’t much I could do. The car felt OK, but we’re still chasing something in the setup.”

The fight for third was a thriller, with Zelos climbing all over the back of Palmer for the final podium spot. Palmer put on a defensive masterclass for most of the race, until Zelos launched an audacious move around the outside at Graham Hill to get alongside the two-time JCW race winner before braving it out around the outside of the flat-out Surtees corner to snatch the spot late on.

“I wouldn’t try that move with anybody but Ben, as the two of us really respect each other and he’s a great racer,” said Zelos after celebrating his second podium of the weekend. “The start was tough, and it was nobody’s fault. James just got a slide on and his rear-wheel touched my rear-wheel and when you’re both on the limit it has an effect. I knew I had to fight back quickly, but Ben defended to well so I knew I had to try something special. But man, that move felt as hairy as it looked!”

Palmer secured fourth after holding off Lewis Brown as Jack Davidson and Rory Cuff had a tight fight for sixth. The two repeatedly swapped the position and ran side-by-side down the pit straight and through Paddock Hill before Davidson made the place his own on the penultimate lap. However, Cuff was handed the position back after a post-race time penalty for Davidson.

James Loukes grabbed eighth ahead of Tom Rawlings, with James Macintyre rounding out the top 10. Brad Hutchison held on to 11th under constant pressure from Callum Newsham as Richard Newman put in a great drive to climb from 16th to 13th at the flag. 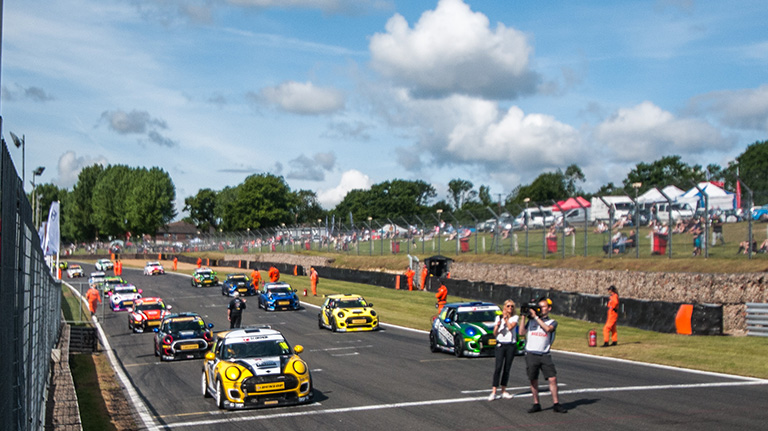 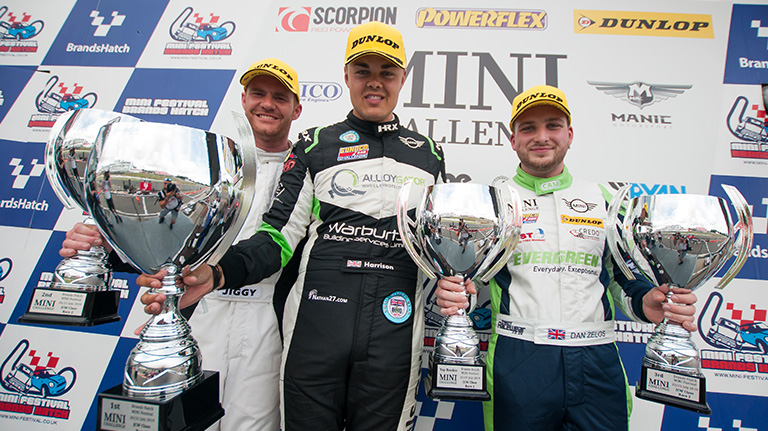 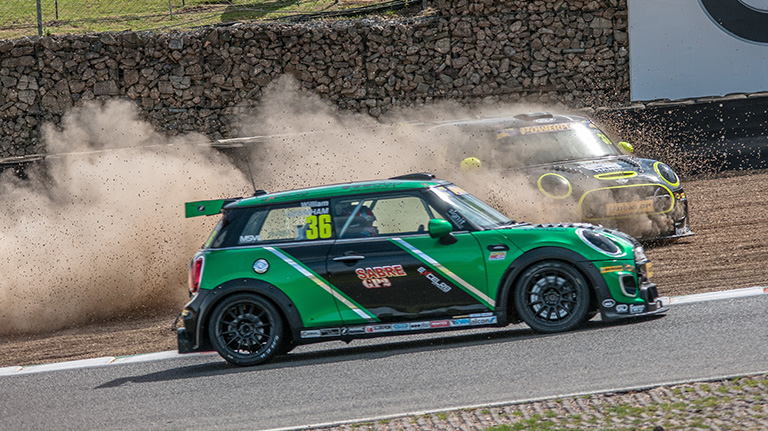