Having been knocked off the top spot in the points after the last round at Donington Park, Gornall didn’t spend too much time behind, with his win edging him back ahead of Nathan Harrison as both drivers starred within a stunning five-car battle for the win.

After the difficult conditions of qualifying, the opening race took place on a fully dry track, with many drivers eyeing some early progress in the more familiar conditions.

Poleman Dan Zelos had concerns about getting his car off the line effectively to banish the memory of his accidental jump-start penalty from the opening race of the season. The MINI UK driver did get a solid getaway, but not quite as solid as Ben Palmer who, from the outside of the front row, swept into the race lead at Paddock Hill Bend.

Also keen to grab his chances early was Gornall, who the dived inside Zelos at Graham Hill Bend as the pole-sitter lost more time by running off-line while attempting to fight back against Palmer. Gornall then turned into the flat-out Surtees left-hander, only for the rear of the car to snap at a lurid angle. He held the huge moment, but it backed the pack up and handed Palmer a useful 1.5-second advantage early on.

Palmer has aimed to make sure his car strong during the early stages of the race, and looked odds-on to hold the gap, until he was suddenly sent for a high-speed ride across the grass at Surtees on lap four.

“I just turned into the corner and the front started bouncing and that just sent me straight across the grass! It was one hell of a moment and there was a pretty big bang at one point, which was a bit worrying… but I just kept my foot in,” he explained.

Palmer rejoined in the lead – minus his entire front bumper, hence the ‘bang’ – but had Gornall crawling all over him. From then on Gornall had the tow, and Palmer had it all to do.

The leader’s determined defending meant the race soon developed a five-car train for the lead, with Palmer holding off Gornall, Zelos, Harrison and Lewis Brown. From then on, it was an enthralling battle for top spot.

Gornall made the first move, slipping alongside Palmer through Paddock Hill Bend before Harrison also towed to the outside. Heading into Druids, the top three ran together and, as Gornall dived for the inside and Harrison went outside, Palmer was pincered in the middle. There was contact and Harrison was shuffled wide and had to take to the runoff to hold the resulting slide. He rejoined in sixth, as his title rival Gornall emerge from the corner with the lead.

Once ahead, Gornall controlled the race, as Zelos got the jump on Palmer to run second. But he had a plan. “I was trying to drop back a little to cool the car and the tyres, and was planning a proper attack on James over the last few laps,” said Zelos, who began to hound Gornall over the last few tours, regularly having a look up the inside at Paddock, but he was unable to find a gap in the leader’s armour.

Yellow flags at Surtees and Clearways to warn of the stranded cars of Kenan Dole and Harry Gooding removed one of the prime overtaking spots on the circuit, and brought the chequered flag out a lap early, much to Gornall’s relief.

“That was such a hard race,” said Gornall. “I had a few massive moments and was on the lock-stops a few times! Ben is so good at defending so I knew I had to take my chance to pass him when I had it, but even when I got past I had a whole bunch of cars pushing me really hard. I really had to work for that. The yellow flags at the end at least meant I wasn’t going to get lunged at that part of the track. But I just had to hold my lines and I’m chuffed to bits with that result.”

Zelos took second and added: “The start was actually decent, but I just couldn’t hold off Ben, who had his car set up to go right from the start, and after that it was just a real battle. I was struggling a bit with understeer, which meant I couldn’t attack at the places I wanted to. But it’s another podium and I’ll very happily take it.”

The fight for third was just as tight. After his moment up at Druids, Harrison put on a charge over the closing laps to sneak inside of Brown at the hairpin and then snatch third from Palmer out of Clearways to net another podium, ensuring he remains right on Gornall’s tail in the championship.

“That race was crazy!” said Harrison. “Around here it can be pretty tough to overtake so you really have to go for it when you see a chance. During that fight for the lead at Druids I had to go for it around the outside, and I thought I had it done but I got a whack on the rear wheel which sent me way wide. I thought that was it, but I nailed the throttle and somehow held it. After that I was probably a bit frustrated, but mostly I just knew I had to have more points with James out front so I just kept making moves. My fastest lap was the 17th one!”

Brown took a strong fourth place after also deposing the struggling Palmer late on when his car was really starting to feel the effects of that earlier off at Surtees. Rory Cuff was a fighting sixth ahead of Jack Davidson, James Loukes, James Macintyre and Tom Rawlings.

Calum King lost ground when he suffered a spin at Paddock Hill, while Jac Maybin was forced into retirement after being caught up in a multi-car tangle at Druids. 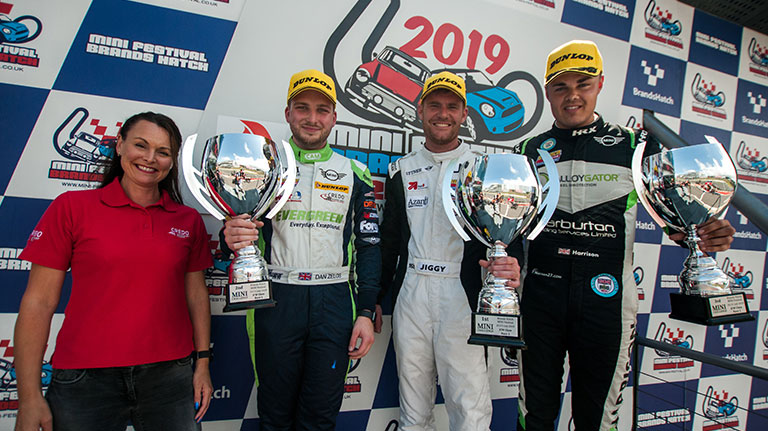 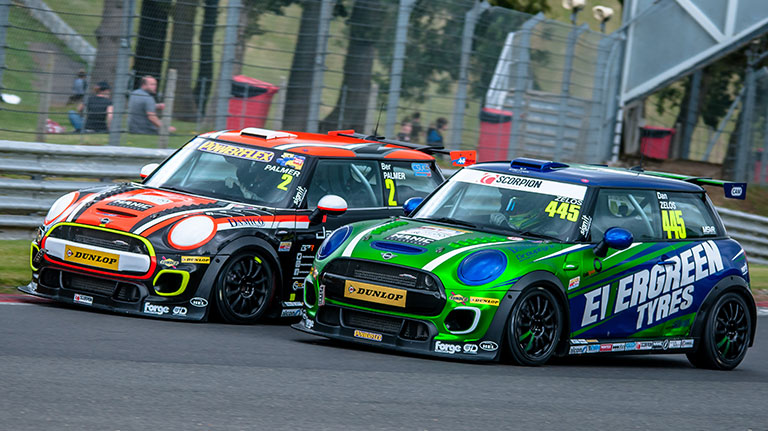 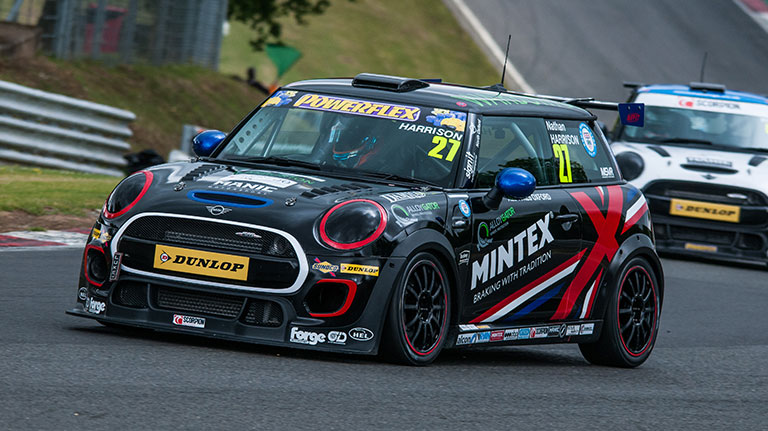