Ben Palmer completed a dream weekend at Silverstone by taking a second victory in the final race of the weekend, as the championship chase was blown wide open by a first retirement of the year for points leader James Gornall.

Fresh off the back of his win from race one, Palmer started in sixth on the reversed grid for the finale, and had all the hard work to do once again.

Pole was handed to James MacIntyre, and he duly converted the front-row start into an early lead, even if it didn’t last long. MacIntyre misjudged his braking into Maggotts and dipped a wheel onto the grass entering Becketts before sliding all the way across the green stuff and down the order to eighth.

That handed the early advantage to Tom Rawlings, who put in a star turn to lead the first half of the race. Gornall got a decent start, but was caught up in a first-lap collision with the crossed-up Jac Maybin and Dan Zelos through Village corner. The impact broke the steering arm on Maybin’s car and consigned him to the pits after his strong run in race one.

Gornall’s car survived the hit to hold second, but would eventually grind to a halt with a broken driveshaft moments after Palmer managed to demote him to third. “I’ve got no idea if the driveshaft went because of the contact, or if it just went,” said Gornall. “It’s a gutting was to end the weekend and doesn’t exactly do me any favours in the championship.”

With Gornall out, the chance was there for his rivals to make inroads. And the driver who perhaps made the most of that was Nathan Harrison, who put in a truly stunning drive to recover from his race one troubles.

Harrison started way back in 23rd, but scythed up the order to run 16th by lap two, ninth by lap four and he was on the back of the top three with two laps to run.

Rawlings drove superbly to hold off the charging Palmer as long as he could, but eventually succumbed when he locked up and ran too deep into Brooklands, allowing Palmer past. That put Palmer in clean air, as the fight for the remaining podium spots intensified behind him.

Rawlings fought doggedly to hold second, and soon he, Zelos and the charging Harrison ran three-abreast up the Hangar Straight, with Harrison pulling off a stunning around-the-outside move to snatch third from Zelos at Stowe. He then dived past Rawlings for second at The Loop. That move compromised Rawlings’ exit, and gave Zelos a run on him down into Brooklands. There was little the former leader could do to defend, and he wound up fourth, but his performance was certainly worthy of a podium.

Up front, Palmer took the win ahead of Harrison and Zelos.

“It’s been a perfect weekend,” said Palmer. “Things have just really clicked for me this weekend. I could have made the job easier for myself with a better qualifying, but that was a bit of a lottery anyway considering it was our first dry session. I’ve been in the right place at the right time most of the weekend, and there have been a few of the guys high in the championship who haven’t. I just tried to stay consistent and bite them when I could. Toward the end I was just nursing the tyres, and I could see Nathan absolutely charging through in my mirrors. I was glad that was the last lap!”

Harrison said: “I think that was the drive of my life! Fair play to the boys at the MINI UK team, they worked so hard to give me a great car for this race after the disappointment of race one, and this result is absolutely for them. The start was crazy with cars everywhere. My aim was just to get into the top 10, so to get P2 is just brilliant.”

Zelos added: “It was a hard race. I got a pretty big hit at the start, but the car survived and I was chasing Jiggy [Gornall] when his car just stopped pulling right in front of me and I had to avoid him. It’s been a good weekend in terms of the championship with everybody around me having problems. So I’ll take this happily.”

Behind Rawlings, Rory Cuff raced hard to fifth, holding off Max Bird – who himself was on a charge having started 12th – with Sam Weller finishing his weekend in seventh. Jack Davidson netted solid points for eighth after a superb recovery drive from 25th on the grid. Kenan Dole was ninth, with unlucky poleman McIntyre rounding out the top 10. 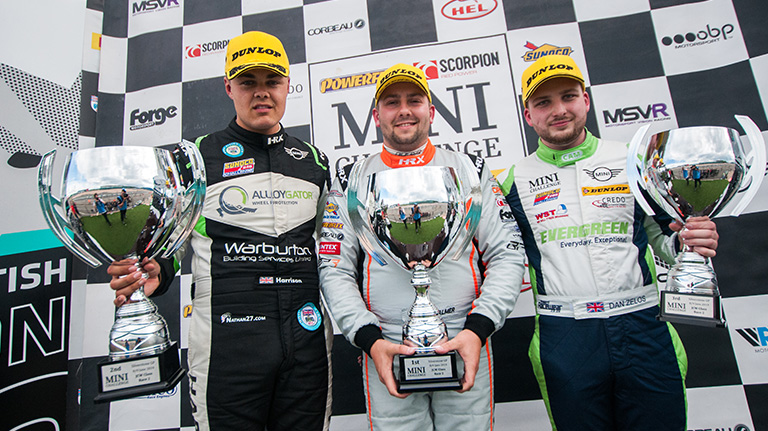 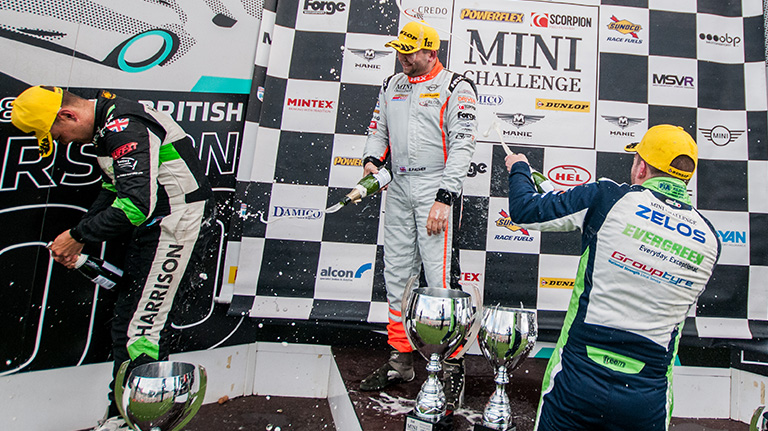 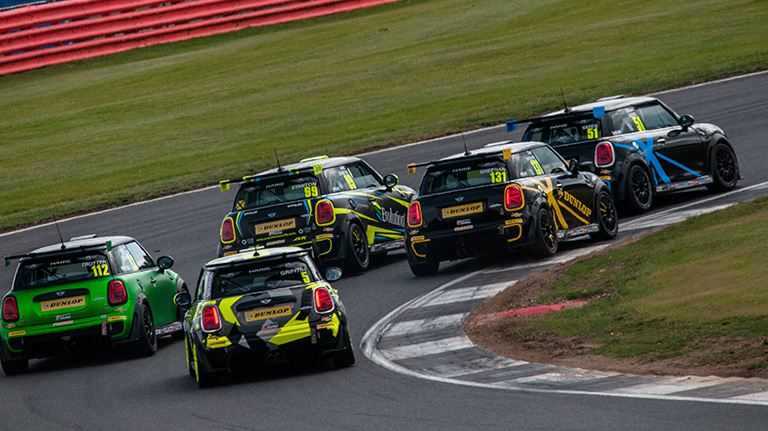