Qualifying
A very early start and a wet track welcomed the Cooper and Pro classes to the opening of this year’s MINI CHALLENGE.

Lots of new drivers venturing out on track for the first time added to the excitement. Returning to the MINI CHALLENGE Pro Class this year, after a year off was Martin Poole. Would he be on the pace with his rebuilt car?  Yes, was the answer with 2 very quick laps from the green lights. He was closely followed by Robbie Dalgleish and Toby Goodman. Toby ending with P1 on the 4th lap with Robbie in P2 on the same lap. Martin had to settle with P3. Alex Nevill who had moved up from the Cooper Class was still coming to terms with cold slicks and a wet track with P9.

In the Cooper Class, Josh Porter put some Pro class drivers to shame with a P6 overall and a P1 in class. Lee Pearce finished off where he was last year with a solid P2. Mark Cornell was at P3 having decided that the Cooper Class was the best place for him to be.

And so the 15 minutes came to a close as the cars returned to Parc Ferme and the paddock.

Race 1
With a Cloudy Sky and promise of rain on the dry track 21 cars lined up on the grid. Short and sweet was the order of the day with a Red Flag being shown on the 2nd lap after 3 cars had an unfortunate coming together on the Senna straight. After some frantic work by the Orange Army and Track Staff, the race was restarted after a 10-minute pause. Green flag lap followed by 3 racing laps was all the time given before the chequered flag. Robbie Dalgleish in P1 followed by Martin Poole and James Hilary in Pro class. In the Cooper class, new driver Paul Manning kept his foot down to secure P1 followed by Mark Cornell in P2 and Lawrence Harris in P3.

Due to the race being so short, there was not the time for any of the drivers to settle into any kind of rhythm or even get any heat into tyres. We had to wait until the next day to see some great racing.

Race 2
After a late night and early morning for working, all 21 cars lined up for the start of their 2nd race of the weekend. The sun was bright and the track was dry. Martin Poole was raring to go. After the lights went out he was off. There he stayed for the whole race. James Goodall was in contention as too was Robbie Dalgleish and Toby Goodman. Some great racing, slipstreaming and bumper hugging was on display. The spectators loved it. Throughout the whole field, battles were going on between groups of 2 or 3 cars all jockeying for position. Either to overtake or intimidate. Great racing. Martin in P1, Robbie in P2 and Toby Goodman in P3. In the Cooper class, Lee Pearce came to a halt on the penultimate lap after making his way through the field. Paul Manning (P1) and Mark Cornell (P2) were locked in battle, with Paul finally getting the class lead on the 3rd lap. Josh Porter was the hero coming through the field for P3 in class.

Heroes of the weekend have to be Martin Poole for his form after a year out, coming back right on the pace and to continue his run podium visits. Josh Porter for his P3 after an extensive rebuild to the front end of his car by Excelr8 overnight. The car looked went amazing, taking the fastest lap in his class too.

Qualifying
The track was damp, with the odd patch dry tarmac. Cloudy and not too warm. The Slick tyres would be staying too cold to work properly. Still, it was the same for everyone.

Stuart McLaren was on fire from the word go, with P1 on the first and 2nd lap. But there was no holding back from Daniel Butcher-Lord, carrying on with the same pace as shown at Cadwell Park last year. The guy is quick, he has a great car too. All he needs now is track time under race conditions. P1 was his with Stuart McLaren in P2 followed by Rob Austin. Rob was running a new car built by AReeve Motorsport. Certainly, an immaculate car on its racing debut. P3 for Rob. Sami Bowler was in P4 having been consistent the whole 15 minutes. A small field, but a field of great quality. First 2 places in R53s! Oh, the whine of the Superchargers. Nearly as evocative as the smell of Castrol R.

Race 1
As expected Daniel Butcher-Lord gave a fine demonstration with a lights out to flag victory. Winning by over 2.5 seconds from second place Stuart McLaren. Rob Austin started well and was in contention until his Turbo stopped giving boost. He slowly went down the field and stayed out to get points for fininshing. Meanwhile, Stuart McLaren, Steve Williams and Sami Bowler were having a great battle swopping places a number of times. Just waiting for the slightest mistake or bad exit. Stuart was having gear selection problems so he could not drive any harder. His brakes lasted so well done Mintex. Steve Webb gave up in the end, just running around lap after lap, not on the pace at all. Sami finished in 4th and could easily have been 3rd.  Luck of the draw had her pick pole position for the final race. All back to the paddock for the long wait until the next race.

Race 2
The bright sun had dried up all the rain, we had strong daylight to contend with, hard shadows and warm tyres. The start had Sami getting her best start of the season, but unfortunately, still being on coldish tyres span out of the lead on the first lap to end up last. I am sure she won’t make that rookie mistake again. Daniel Butcher-Lord was soon in the lead and he started pulling away from the field again. This time Rob Austin, with his Turbo boosting well was on his heels. The rest of the field was again playing with each other putting a great display of racing. Stuart leads the remaining mid-field pack as they raced around for 7 laps. Sami pulling back to P5. Daniel took to much speed into Coram and had to let the triumphant Rob Austin through to take P1. A well-deserved victory with his car bang on song. All the cars that started finished with Rob Austin getting the fastest lap.  All they had to worry about now was post-race scrutineering and dyno runs. With that, we all returned home looking forward to Oulton Park. 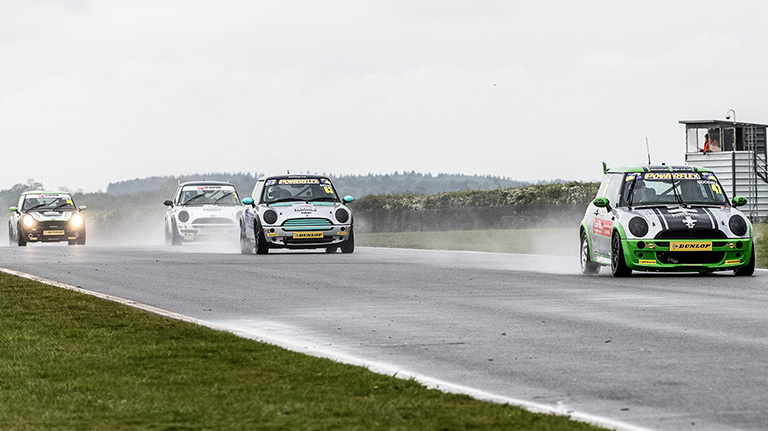 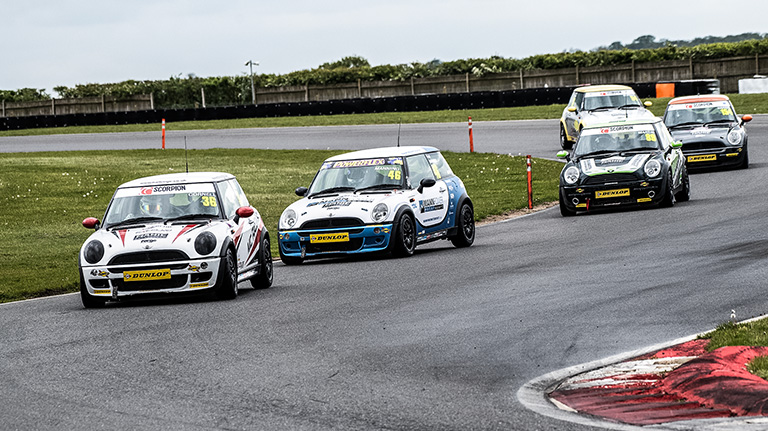 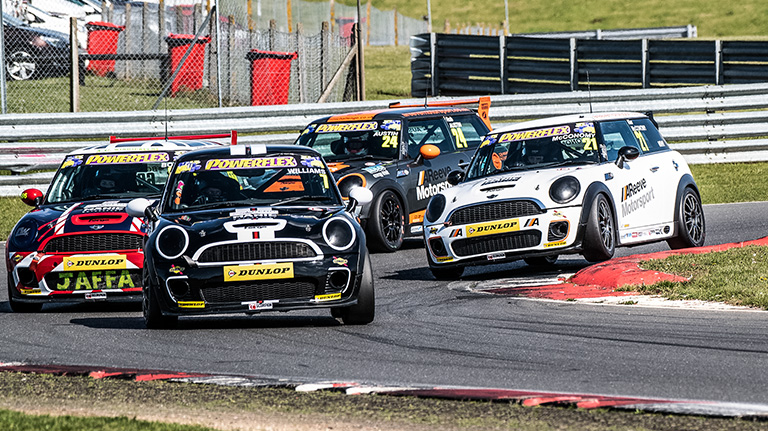 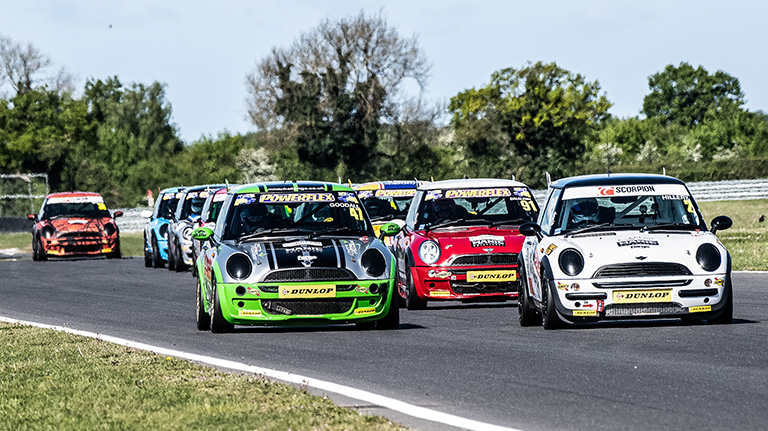 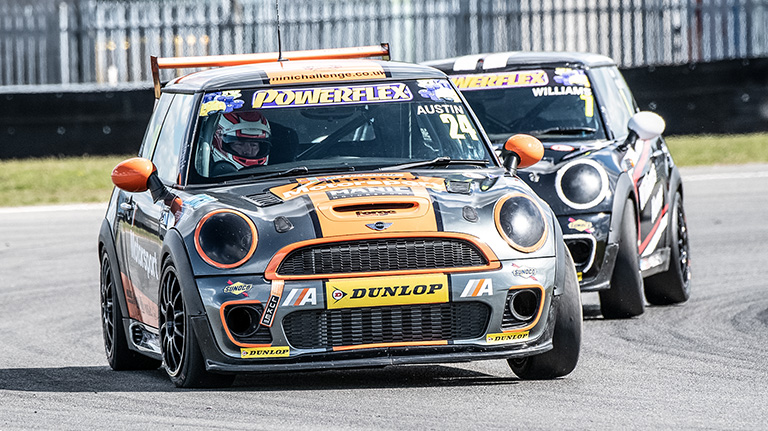 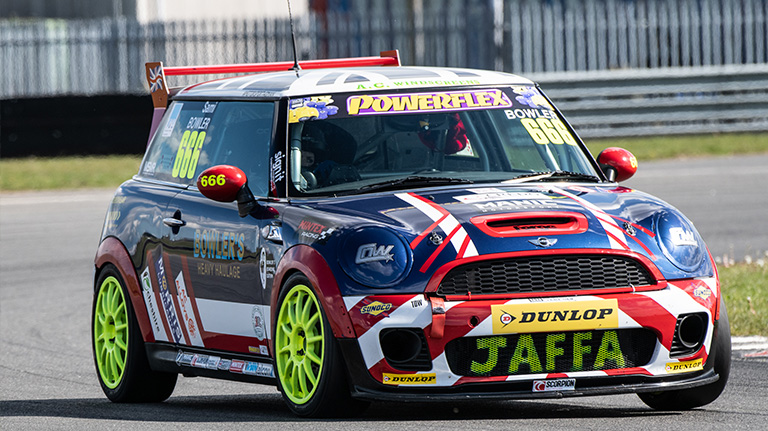