Having practised the previous day in full sunshine most of the Coopers were well set up and raring to go.  Kyle Reid, Pro Class leader, has never raced at Brands before, he learnt quickly and managed a P4. No surprises with Toby Goodman, Simon Walton and Richard Newman taking the first 3 places in the Pro class. In the Am class, Alex Nevill, Andy Godfrey and Gary Papworth took the first 3 places. 4 cars had times taken away for exceeding track limits. Jacob Andrews did not make it very far as he parked his car in the gravel at Paddock Hill Bend. His 3 qualifying laps were conducted during the Mini Miglias qualifying. Toby kept us all on the edge taking his fastest lap after the track limits lap had been taken away, he was chased down by Simon Walton. Kyle Reid was 0.27 behind Richard Newman in P3. Half a second split the first six places. Showing how high the skill level is in the Pro class. In the Am class, Alex Nevill showed the field his pace with Andy Godfrey and Gary Papworth close behind. Adrian Norman and Lee Pearce kept them all on the lookout. Lee in his shiny new race car taking to it like a duck to water. (More about the water later).

A race of 2 halves, 6 laps red flag another 6 laps chequered flag. All got away well from the start with Richard Newman well away with Kyle close behind, Robbie Dalgleish dived in behind and they all settled down to a steady race. Simon Walton had his car cut out on the grid, the start was delayed while his car was pulled off the grid. His team fixed the car but was not allowed to restart from the Pit lane as the race had started. Neal Clarke’s car had deposited oil around the circuit and the race was red flagged to clear it up. Kyle had just managed to pass Richard for P1 when the race was halted. After the restart, Richard Newman managed to pass both Kyle and Robbie Dalgleish, but it only took one lap for Kyle to get into the lead again and there he stayed. In the Am class, Andy Godfrey was all over the class with Alex Nevill having a poor restart, this saw Alex clawing his way back to finish a strong P2 in the class with Andy Godfry in P1, Lee Pearce in his newly built R50 had a very good P3.  A great race with no incidents, just good clean racing.

Rain in the air, but only spitting. The track was dry so what tyres do they use?  After the green flag lap, Mark Cornell thought wets were the answer so he pulled into the pits changed tyres and stated from the pit lane.  Some may have thought not the right move! After the start, Kyle shot off followed by Richard Newman and Toby Goodman but an excursion by James Goodall had the safety car out for 3 laps. So some pitted for tyre changes. After the safety car came in Mark Cornell passed nearly the whole field, he went from P10 to P2 in 4 laps. I think he made the right tyre choice. The run to chequered flag was the tightest I have ever seen, Kyle lost the lead to Mark going round Clark Curve but Kyle had the better run and stayed high to get P1 by 0.013 seconds. The wonder of digital timing. In Am class, Andy Godfrey was having the time of his life being hounded by Lee Pearce and Adrian Norman, they took the podium positions in the class. Alex Nevill did not finish neither did Emma Walsh.

Could Kyle make it 3 out 3, can he strengthen his grip on the Sunoco Challenge and go to Florida?  The reverse grid did him no favours with P5 for him. Giving Toby Goodman Pole position alongside Richard Newman. Next Robbie Dalgleish and Mark Cornell. Am Class was doing it’s best to stop Andy’s 3 wins out of 3 by putting Neal Clarke and Gary Papworth on their front row. The heavens were still chucking down the wet stuff. Motor racing on Sunday what do you expect?. The race was really down to how well you like to slide the back end of your car. Standing water at Graham Hill bend saw a good few hairy moments. First Lap and Kyle was already in P2 having passed Robbie Dalgleish and Richard Newman going into Paddock Bend. Next up was Toby Goodman who was passed by Kyle on the next lap. Richard Newman and Robbie Dalgleish were having a good battle for P2 and P3, Simon Walton also tried to play, the win was secure for Kyle by nearly 4 seconds. In Am class, Andy Godfrey was languishing down in P4 just trying to pass Lee Pearce, class winner, Gary Papworth P2 and Alex Nevill. He finally took Alex after a moment on the 11th lap. Andy went home with 3 podiums 2 wins and a P3. Happy Bunny indeed. Kyle was as happy as can be on the trip to Florida looking as though it will happen. Only Cadwell and Rockingham are in his way. Just 4 races to go! 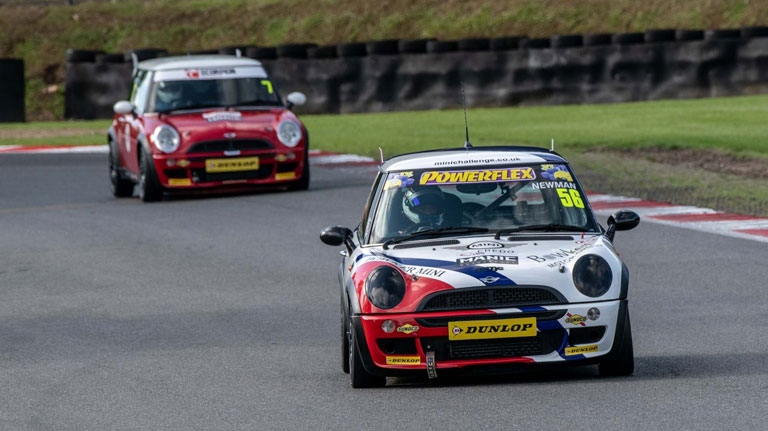 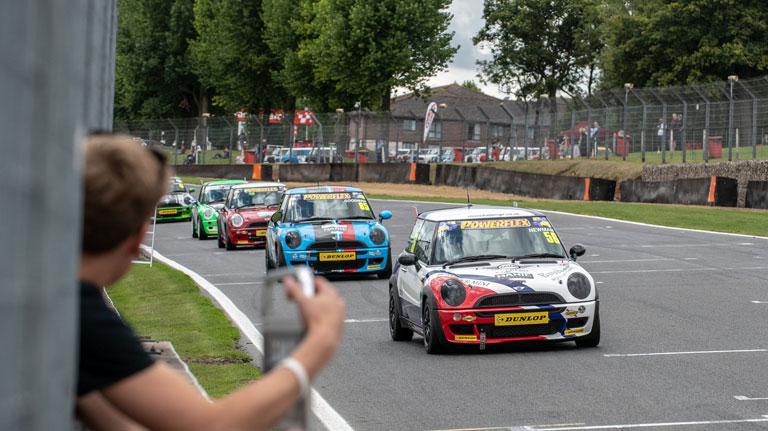 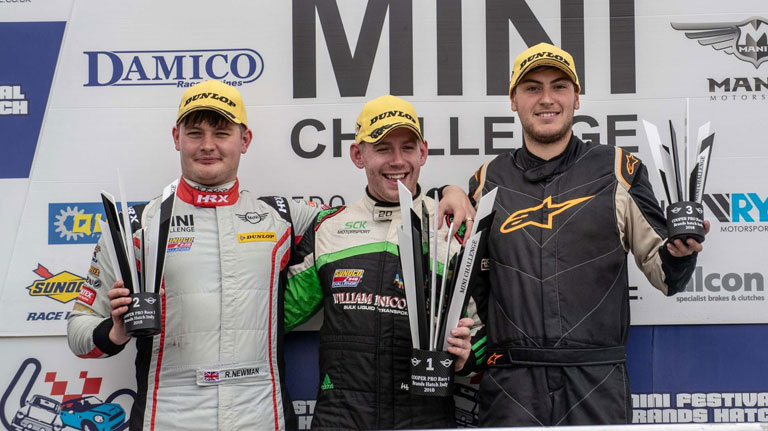 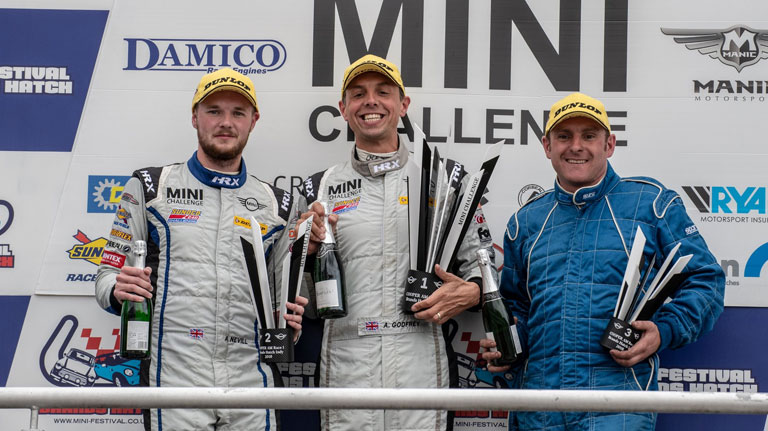 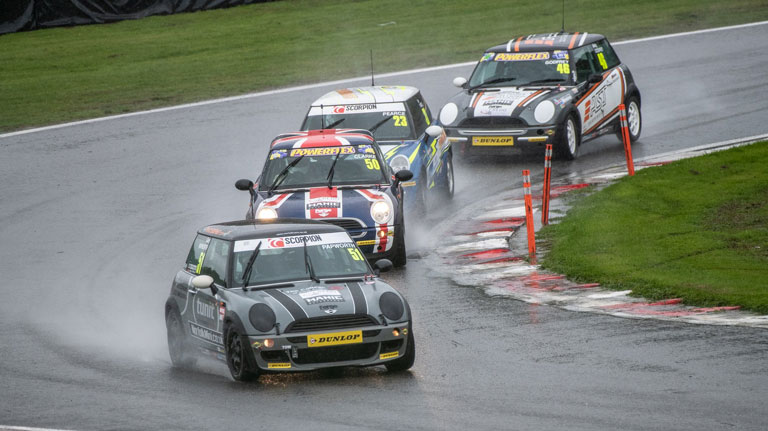 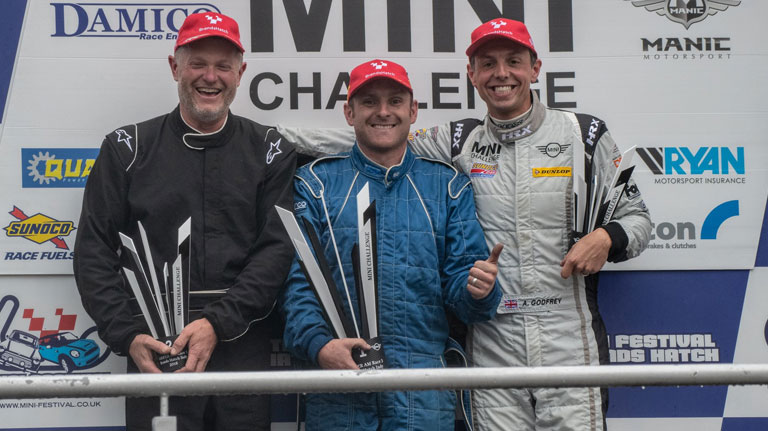