A combined qualifying session, with the Coopers and the Cooper S’s all hitting the track early on Saturday morning. 36 MINIs circulating in a 15-minute session. Cars were starting to queue before the start to ensure a clear track, seemed like a great idea! The fast experienced Cooper S cars mixing it with young novice drivers in Cooper Am cars was certainly a spectacle to see.  An early leader in the S class was Stu Lane, he stayed at the top of the times for most of the session, up until Jono Davis piped him with a margin of 0.067 with a lap time of 1:22.014. Tim Bill was in 3rd place until he was taken to Stewards and handed an 8 place grid penalty. Will Fairclough, on his racing debut, was elevated to 3rd with 1:23.975.

In the Cooper Pro Class, Kyle Reid was showing his Scottish experience and was in among the Cooper S cars from early on with a 1:25.87. Simon Walton chasing followed by Ethan Pitt. All beating 6 S class cars!

In the Am Class, Alex Nevill was the star and claimed pole position with a 1:28.862, Andy Godfrey was close behind in P2 with Neal Clarke in P3. Gary Papworth only managed 1 timed lap with 2 excursions to the grass, resulting in a damaged water hose and lots of steam. A visit to the Excelr8 pits was his next stop. Most of the cars managed 10 laps in the 15-minute session, with the Rockies learning their cars, circuit and tyres managed 7 or 8 laps. 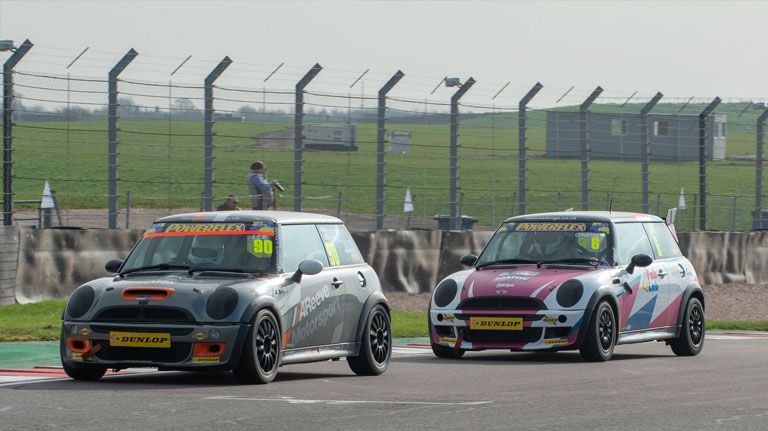 A nearly full grid of R50 MINIs, a great sight to see. Kyle Reid pulled away from the grid with Simon Walton and Ethan Pitt close behind. They stayed this way until the chequered flag. A race within a race and great to watch. These 3 were in a class on their own.

In the Am class, starting behind the Pro Class, Alex Nevill, Andy Godfrey, Neal Clarke and Adrian Norman did much the same in pulling away from the rest of the grid. Martin Poole had car issues and pulled into the pits on the 3rd lap. The rest of the field continuing on their way learning about the grip of Slicks in the Pro Class and just staying out of trouble in the Am Class. Only 3 Am cars were lapped. Stuart McLaren, new to the Pro Class was handed a 5-second penalty for exceeding track limits. Both Kyle Reid and Alex Nevill took the fastest lap in their respective classes. Lots of racing was going on behind the leaders with lots of overtaking and out-braking each other, great to watch. A few excursions to the grass were inevitable! The infield was very muddy and made rejoining the field a task in its self, even harder on slick tyres. 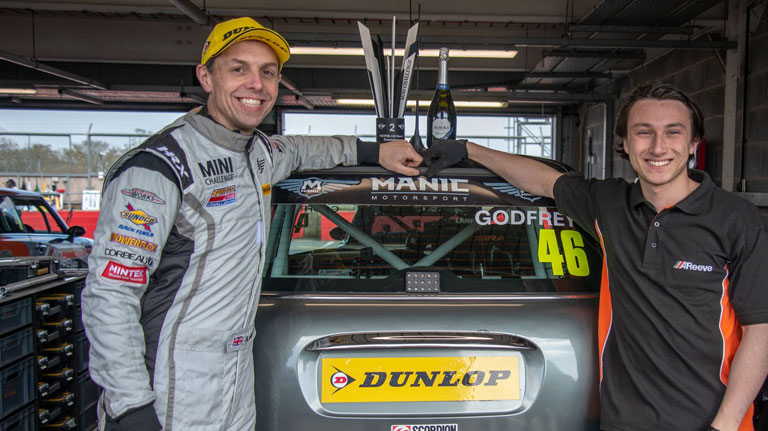 Reverse grid for the first 5 places, gave Toby Goodman and Gary Papworth pole position in their classes. With the late afternoon start and the setting sun playing its part in the race, this should spice things up a bit too.

A great start by Kyle Reid saw him push through the grid to the front on the 2nd lap. Toby Goodman was hanging on his second place. On the 5th lap Ethan Pitt squeezed into 2nd place overtaking Toby, they stayed this way until the chequered flag. Robbie Daglish, Simon Walton and Jacob Andrews were having a great race, with Robbie betting Simon to the flag. Meanwhile, the Am class was shaping up to a great race with Andy Godfrey and Neil Clarke having a “ding dong” eventually taking them both out on the 5th lap. Leaving Gary Papworth to inherit P2 and Adrian Norman P3.  You have most certainly “got to be in it to win it”. Simon Walton and Alex Nevill both getting the fastest laps. What a great start to the season with Kyle Reid taking 2 out of 2 wins. Gary Papworth had a P5 from the back of the grid in Race 1and a P2 in Race 2 after having qualifying issues with his car. Wai Kong Yau making his debut in a Swan flight car showed he is no pushover. Lydia Walmsley on her debut managed P10. Rory Cuff had a few moments at Roberts, showering photographers in stones. But all in all a great start to the season by all.  Onwards and upwards we go to the Snetterton MINI Festival on 12th-13th May with 3 races. 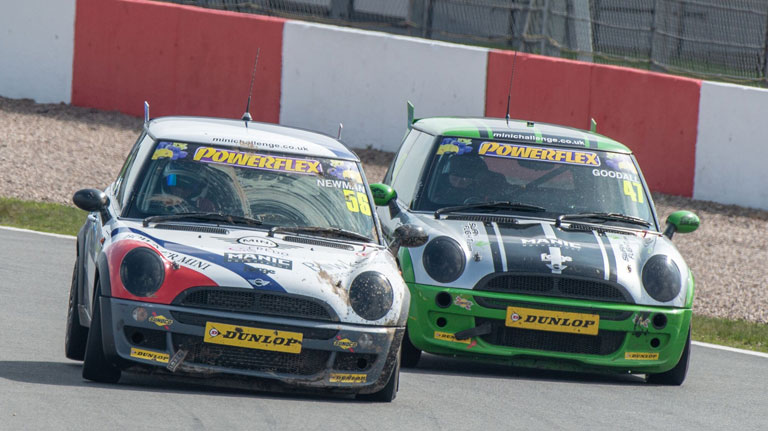 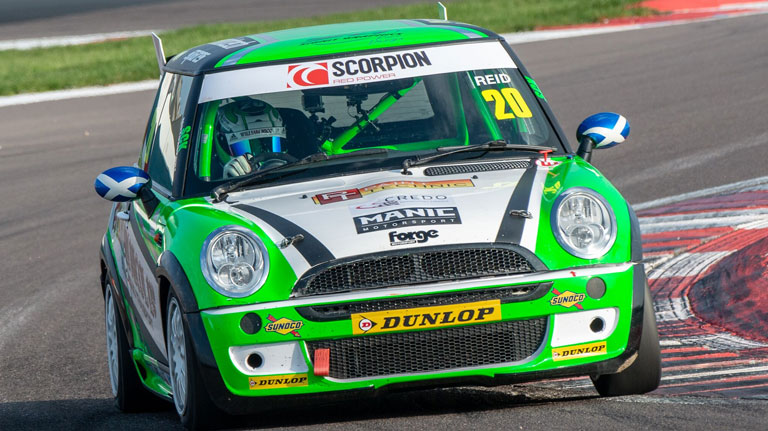 With 12 starters and Jono Davis on Pole alongside Stu Lane, some great racing was promised. At the start, Jono had a poor start and allowed Stu to lead initially until a mistake at the old hair pin allowed Jono through to take a good lead for most of the race. On the penultimate lap, with a 4-second lead, it all went bang with engine failure at the Craner Curves. Racing over for Jono. Will Fairclough in his R56 had squeezed past Stu and now had P1 for his “Fairy Tale” race weekend. First race and first win! Stu trying so hard to pass just did not manage to catch him, With the extra power he had and weighed down with ballast made the car a handful. Rob Austin had a steady race and finished in P3. Next up was Chloe Hewitt, having an amazing race, full of confidence, she was on fire to take her P4. Tim Bill had car issues, losing his supercharger belt and the car getting hot, he had a DNF, Alan Lee retired on the 5th lap. At the finish, it was a 1,2,3 for AReeve Motorsport and the 3 R56’s. 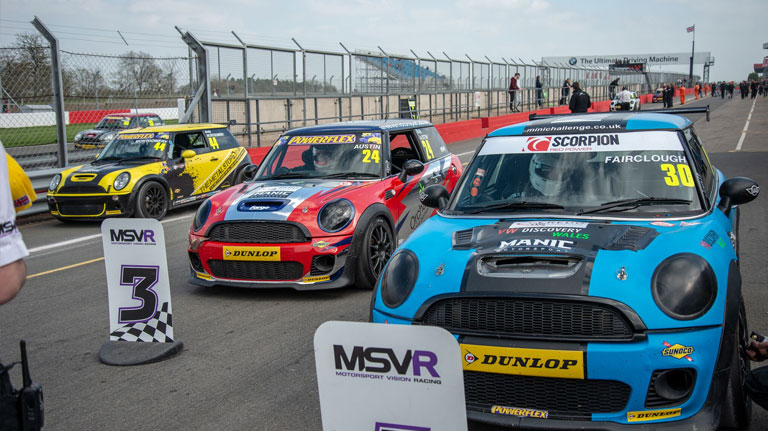 With both Jono Davies and Alan Lee non-starters, it was down to 10 cars for the 2nd race. With the reverse grid, Kevin Owen was on pole position alongside Andy Montgomery. A great race with Rob Austin jumping from P4 to P1 on the first lap. He was determined and smart enough to stay there until the chequered flag. Kevin Owen slotted in behind Rob and threatened to take the race to him a number of times but just did not have the pace. Andy Montgomery and Chloe Hewitt were having a great race for 3rd and 4th, so much so that they both went off at Roberts and let the places go to Will Fairclough and Tim Bill, Tim who had started at the back could not believe his luck. Andy Montgomery and Chloe Hewitt managed to recover and finished 5th and 6th. Stu Lane had gear selector issues and called it a day after the 7th lap to fight another day. Kevin Owen had the fastest lap and Will Fairclough has another trip to the podium. The end of a great debut weekend. Roll on Snetterton and the MINI Festival. It was great to see Kevin Owen in his Excelr8 run R56 get a podium for the 1st time, the first of many? 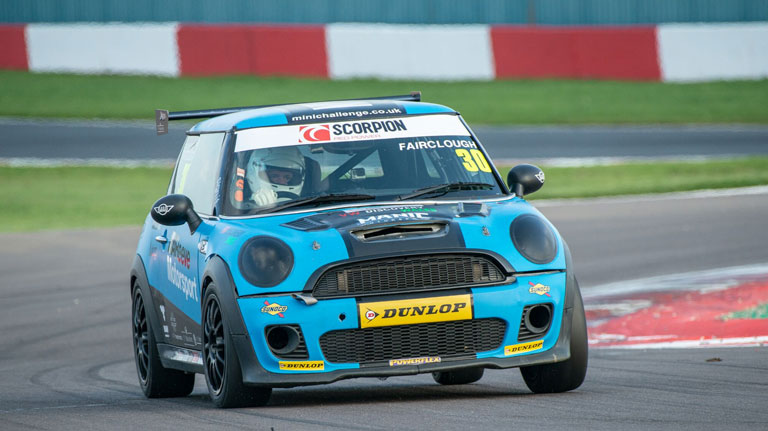 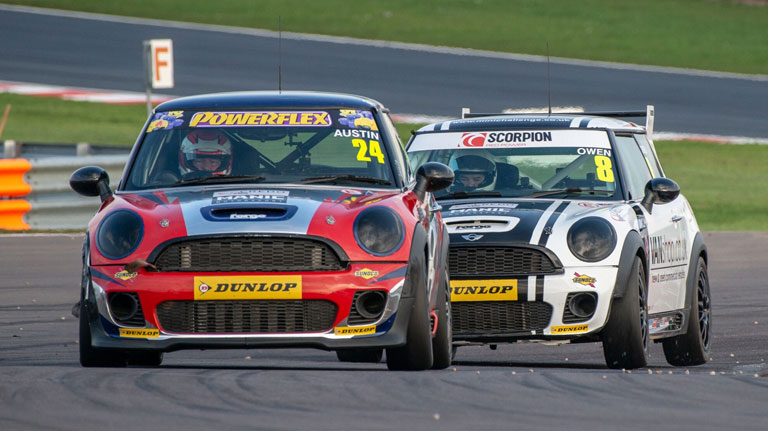