A post-race penalty to Nathan Harrison handed debutant Ant Whorton-Eales victory in the opening round of the MINI CHALLENGE JCW Championship at a soggy Oulton Park.

Following early morning rainfall, former British touring car racer Whorton-Eales looked to take an early advantage as pole sitter Jordan Collard made a nervy start after the field was released having circulated the Cheshire circuit for three laps behind the safety car.

Collard bounced over the kerbs at Cascades, handing Whorton-Eales a prime opportunity to grab the lead.

“I made a genuine mistake because I didn’t know how much I could push the tyres having never raced on this wet rubber, and with only three days’ testing,” Collard said. “I just put the throttle on too early and Ant managed to get underneath me, the experienced driver that he is.”

Harrison, the 2016 championship runner-up, began from third on the grid, but was soon threatening Whorton-Eales for the lead later in the lap.

“My plan was to brake early and get a good exit in order to re-pass Ant into Shell Oils Hairpin,” Collard explained. “As I did that into Island, the marshals left the safety car board out, and soon Nathan managed to pass me. I couldn’t then prevent Paul [O’Neill] getting past later in the lap.” 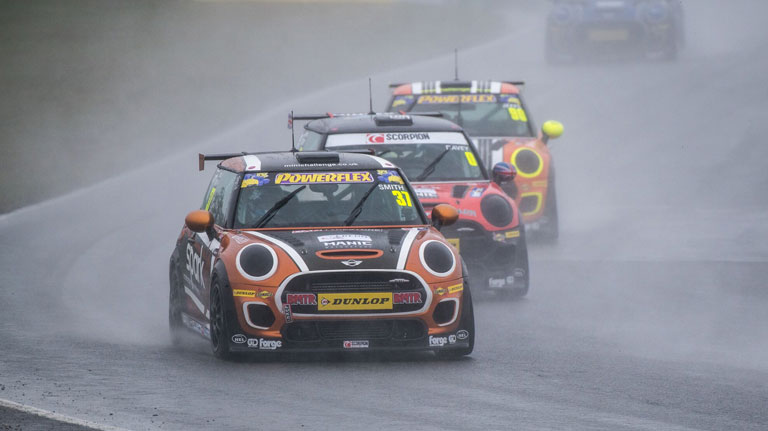 However, officials later handed Harrison a 30-second penalty for the yellow flag infringement. It handed the win to Whorton-Eales with Collard second, and promoted O’Neill on to the podium in third. Luke Reade was fourth.

Lawrence Davey’s late, great move up the inside of David Robinson capped off an excellent race to finish fifth from his 13th place start, while Henry Neal progressed five spots to grab eighth.

British touring car champion Matt Neal made his JCW debut in the second guest car, trailing his sons Henry and Will to take the flag in 25th position after battling with a fogging-up windscreen. Following a severe engine fire during Friday’s qualifying session, Ben Dimmack impressed to finish 23rd.

Whorton-Eales will begin the reversed grid second race from eighth position with Henry Neal on pole. 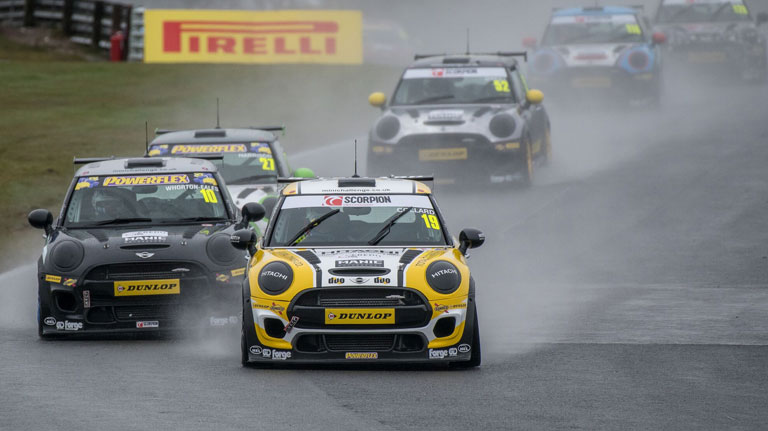 Whorton-Eales and Harrison’s scrap for the lead quickly erupted on the second tour, with the former UK Clio Cup champion out-braking himself at Hislop’s chicane, locking his wheels and having to take to the escape road, handing Harrison the lead.

“I wanted to check out after I took the lead on the opening lap,” Whorton-Eales said, “but we both weren’t going to be able to do that on the wet tyres so one of us was going to make an error. It’s my first time on these wet tyres and my first time in the car was only in Friday’s qualifying session. Neither myself or the JamSport team have the wet weather set-up experience in this car, so we can only improve from here.”

From there, Harrison managed his advantage as Collard’s confidence grew, following and re-taking third from a steady O’Neill driving one of the championship’s two guest cars.

“These cars are so powerful and great brakes that you really can push them otherwise they lock up,” Harrison said. “I just kept consistent on each lap.” 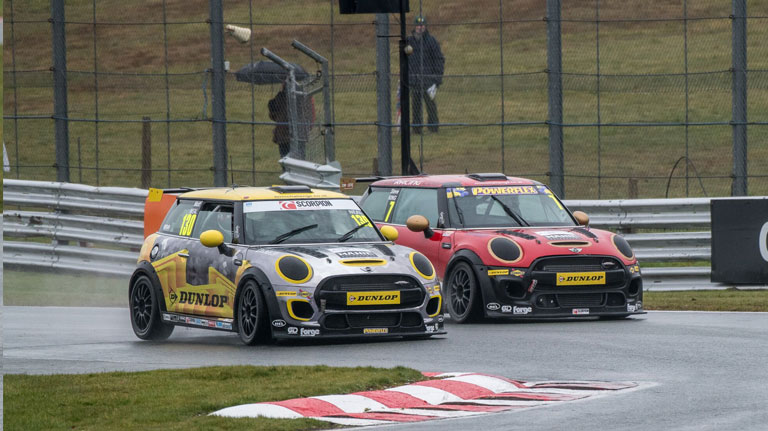