With just qualifying to do on Saturday the drivers and crews were busy polishing and making sure cars were up to their best. Some had been testing on the Thursday and Friday. Chloe Hewitt was having problems, brakes, fuel levels, steering pump, electrics as well as nerves. The Zoo Crew had their work cut out. Aaron Reeve had a reshelled car after the Oulton Park acrobatic show. Aaron had spent lots of time getting a good set up over the last few days. Expectations were high. Tim Bill’s car had just dumped his brake fluid overnight, requiring new brake seals, none available on track so no qualifying or the required 3 laps undertaken. Rob Austin in his ExcelR8 run Bizcarts R56 was feeling lack of power, but could not find any issues to fix. Ben Dimmack was his usual chilled self, Donington being his home circuit, he was relaxed. Andy Montgomery raring to go along with Kevin Owen in the ex Lohen R56 and Neil Ginley worrying about straight line speed and stalling issues. 8 laps should be on as 1:50 is a good time and 15 minutes is the allotted time.

Aarons new car had transponder issues. Ben was quickest straight out of the box, he put heat into the Dunlop tyres and the 2nd lap he put in was a 1:50. Rob Austin was not too far behind with a string of 1:51 and then 1:50.311 on the 6th lap gave him P3. Aaron visited the pits, but in some magic dust and put in a stonker of a lap at 1:48.421 to claim pole along with a few raised eyebrows. A great battle with Andy Montgomery and Kevin Owen, both circulating in 1:53s. Neil Ginley’s best time was a 1:55, meanwhile Chloe was still having issues and could not get below 2:00. A great shame after the highs of Oulton Park and her first Podium.

Tim Bill had got his brakes sorted and did his 3 laps behind the safety car, he could now join the grid but at the back. Sussex Road and Race had spent a long evening and a few beers setting Chloe’s cars up, fixing various electrical issues and doing the tracking. Would her luck change?

A brilliant start by Ben Dimmack, leaving Aaron in pole time to slot in behind him. Star of the start has to Tim Bill making up 3 places in the first lap. Chloe and Neil Ginley played tag with Andy Montgomery until Andy threw an alternator belt. Leaving Kevin Owen in P4.

Meanwhile, the front runner’s race with Aaron, Ben and Rob in a nice straight line. At the halfway point Aaron made his lunge up the inside of Ben stick, having a had a few changes of position at each bend. Aaron would take P1 on the straights only to give it back on the bends. Once in front, he managed to pull away, Ben had used all his race craft to keep Aaron at bay but had to concede on the 4th lap. Rob Austin stayed in touch playing a waiting game to see if either of the front-runners made a mistake. All the drivers were putting in good times, all getting a 1:53 lap in. Looks like a great second race coming up just before lunch with the reversed grid!

All set for the last race for the MINIs. Tim Bill on pole alongside Chloe Hewitt, Kevin Owen in P3 with Rob Austin in P4. Ben Dimmack on the 3rd row alongside Aaron Reeve, with Neil Ginley alongside Andy Montgomery in his fixed car.

Ben made a superb start and carved his way through the field, Chloe having to give way to Ben initially and then Rob Austin. The second lap saw Ben up to P1 with Rob Austin in P2, Aaron Reeve in P3 but his car was spaying oil out underneath the car making the bend a Coppice a bit on the slippy side. By the time he came to the Fogarty Esses the underneath of his car was ablaze. He managed to pull over and get out of the car where the Orange Army attended to the flames, while Aaron was a bit white and shaken.

The race was red flagged so the car could be attended to by the fire marshalls and then taken to a safe place. The restarted race was to be over 7 minutes and cars aligned in their positions at the red flag. Ben Dimmack in P1, Rob Austin in P2, Chloe Hewitt in P3, Andy Montgomery in P4 followed by Kevin Owen and Neil Ginley. Ben Dimmack charged away leaving a sizable gap (4 seconds) in front of Rob Austin, while Chloe had a mirror full of Andy Montgomery who just could not get passed. A great race.

Tim Bill’s Catalytic Converter had some issues so he did not start, the end of a depressing weekend for him. Ben got his P1 with Rob (Robin) Austin in P2 and Chloe getting her 2nd trip to the Podium in P3. To say she was excited would be an understatement. A terrific performance from her. Congratulations to Sussex Road and Race who set her car up so well and the Zoo team who make a lovely bacon and egg roll as well as running her car. 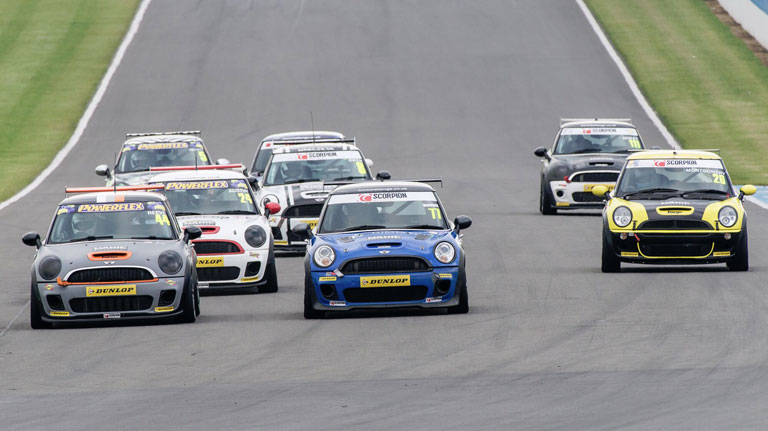 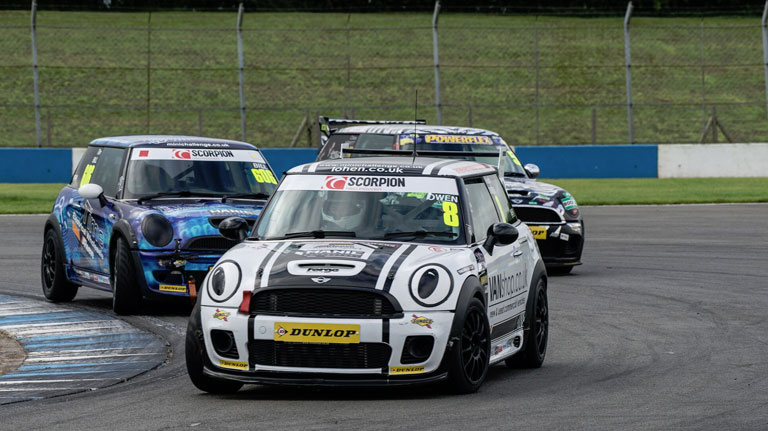 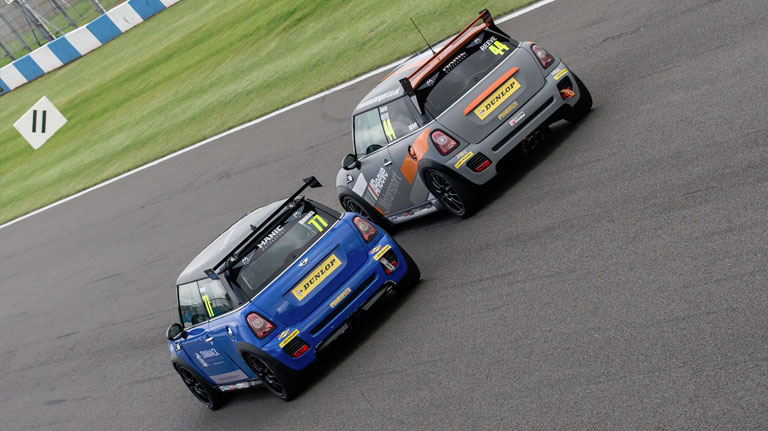 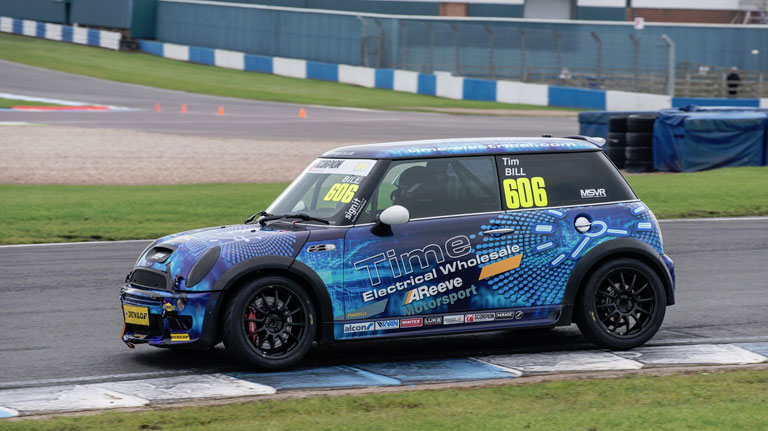 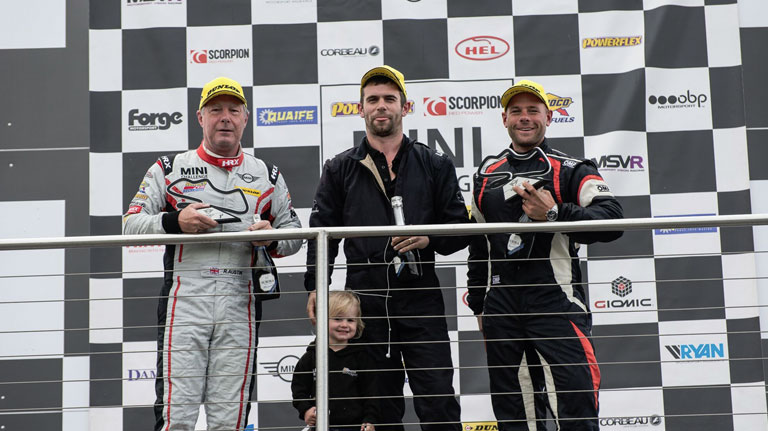 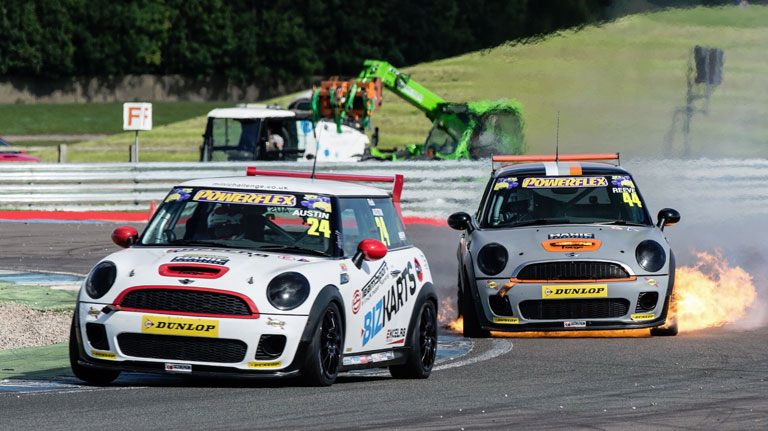 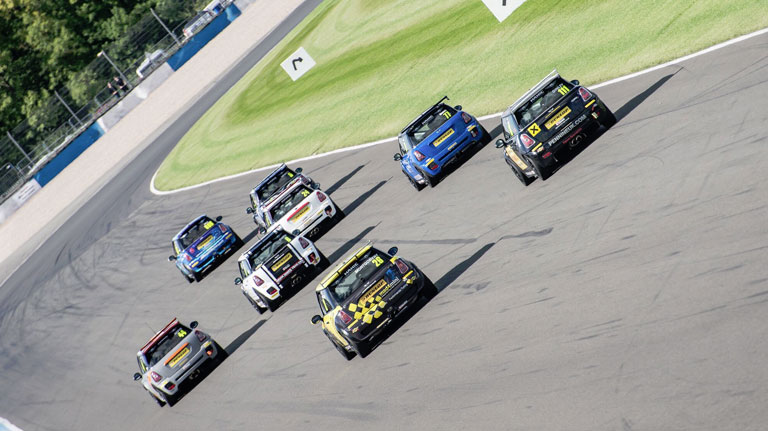 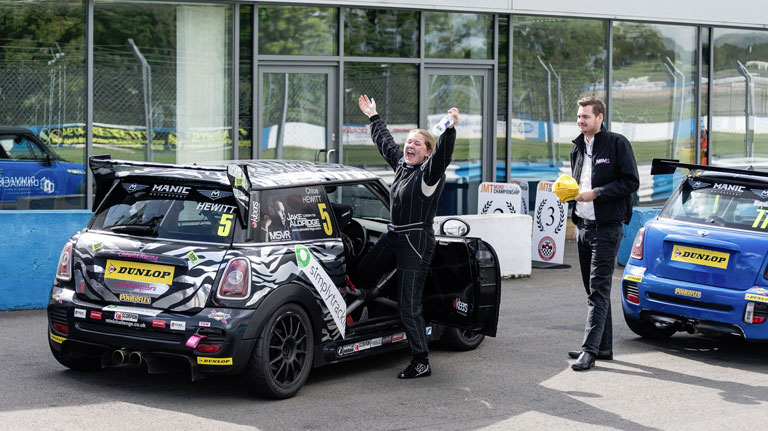 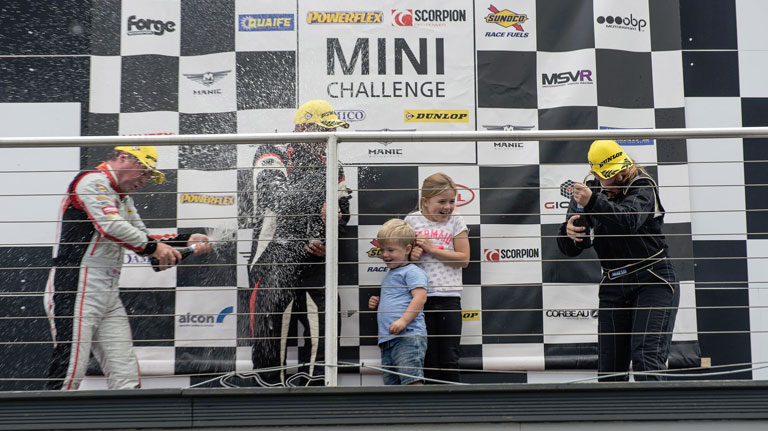