A nice early start with qualifying and 1 race on Saturday and 1 race on Sunday Morning. Bryony King and Ethan Pitt were guest drivers this weekend, hopefully entering next year’s MINI CHALLENGE. Bryony was out at Oulton Park in her spectacular looking car. Expectations were high for the weekend with Matt Hammond, Jessica Hawkins both in contention for the Pro Class championship as well as the Sunoco 240 challenge; with both Sam Weller and Richard Newman keeping them honest. Simon Walton has returned to the fold. Darren Chatt is due to some luck at some point during the year as well.

In Am class, Stuart McLaren, who had a scratched eye earlier in the week was hoping to keep up his impressive performance. Andy Godfrey and Chris Middleton are two regular visitors to the podium, with Adrian Norman also in contention for a podium visit. Gary Papworth, Dale Jamieson and Daryl Brown bringing up the rear but they are all learning race craft quickly and all of them could upset the order before the year-end. As to be expected qualifying was a tightly contested 15 minutes, with pole position changing a number of times. With 2 laps to warm up, the tyres and then a blast round at race speed does not leave too much time to do your best lap. Traffic is a major issue with 18 cars on the track, so management of clean air or slipstreaming is vital. The last 2 laps were breathtaking with the Richard Newman putting his car on pole, then Jessica Hawkins took it back and then Matt Hammond took pole on his last lap. Great to watch too. Sam Weller was not his best with a P5 and neither were the Waltons. Mark Cornell being between them. James Goodall put in a few very quick laps for P4, Byrony King was in P6 With Darren Chatt not having much joy either.

In Am Class, the order was as to be expected with Stuart Mclaren getting the pole on his last lap followed by Andy Godfrey, Chris Middleton, Adian Norman, Gary Papworth, Dale Jamieson and Darryl Brown.

A great start by both Matt Hammond and Jessica Hawkins, the potential of a great battle with Richard Newman mixing up with them as well. Matt Hammond had the fastest lap up until the last lap when Richard Newman piped him and then so did James Goodall. Unfortunately, on the 3rd lap Chris Middleton dropped a wheel on the edge at the Esses causing the safety car to come out for the next 2 laps. This allowed all the field to bunch up. With a safety car out, not only does it bunch the field up it effectively puts the Am cars right up behind the Pros. Good news for Dale Jameson as he managed to get in front of Adrian Norman as they had been fighting for P3. Gary Papworth tried to get into the act too. Stuart McLaren had a commanding lead as was never really challenged to take P1 in his class. Meanwhile, the Pro class were all tightly bunched and they did the last two laps at race speed with elbows firmly out. A very tight finish with Matt Hammond in P1, Jessica 0.23 seconds behind and Richard Newman in P3 0.38 secs behind. A 1,2,& 3 for ExcelR8. Sam Weller took P4 narrowly ahead of James Goodall, Owen Walton, Bryony King, Simon Walton, Mark Cornell and Darren Chatt who had a big off at Coppice as he lost his fight with Owen Walton.

Reverse grid time, before Lunchtime already to go and hungry. Pole was given to James Goodall with Sam Weller in P2. Both are very quick drivers, so it should be exciting and what a pair to try to overtake! Next up is Richard Newman then Jessica Hawkins and Matt Hammond, followed by Owen Walton, Bryony King, Simon Walton, Mark Cornell, Darren Chatt and Ethan Pitt. 2 rows are left clear and with a 10-second wait, then the Am Class lineup with Adrian Norman on Pole, P2 to Gary Papworth, P3 Dale Jameson, P4 Andy Godfrey, Stuart McLaren, Daryl Brown and Owen Walton.

A great start again. Matt Hammond was on fire, not actually on fire but quick of the blocks straight into P3 with Jessica right behind him. The rest of the Pro Class bunched up very tightly and went through Redgate all together down through Hollywood and the Craner Curves all as one. Up through the Old Hairpin, round the rest of the track until the Fogerty Esses, but now the front 3 had pulled away, the rest were side by side. Simon Walton had to brake hard and his rear end broke away sending him sideways into the barrier. An almighty thud broke the side windows with surprisingly little body damage. Simon was OK but had to get out of the passenger door. Meanwhile, with the Safety Car deployed, Darren Chatt’s engine decided it had had enough and put a con rod through the side of his block 2 laps before the end of the race. Stuart McClaren pulled into the pits with issues as well.

The Safety car pulled in and we went racing again. Matt managed to climb up to P2 followed by Jess and finally got in front of Sam Weller on the 5th Lap. He then pulled away from Sam, Jessica was battling with Richard Newman who slotted into P3 demoting Jess to P4 for the last 3 laps. In Am class without Stuart McLaren up front, Andy Godfrey got a good start from P4 on the grid and moved his way up through the field into P1 and stayed there. Chris Middleton was P2 and Adrian Norman managed to fend of Ethan Pitt for P3. Dale Jameson and Daryl Brown followed them home with Stuart McLaren still circulating but a lap down. 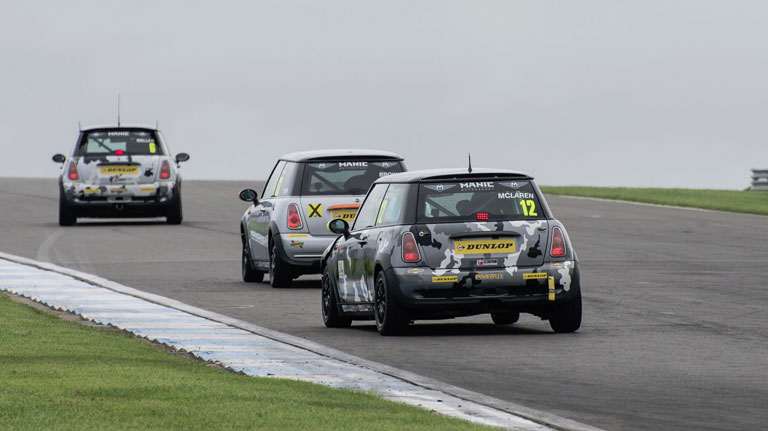 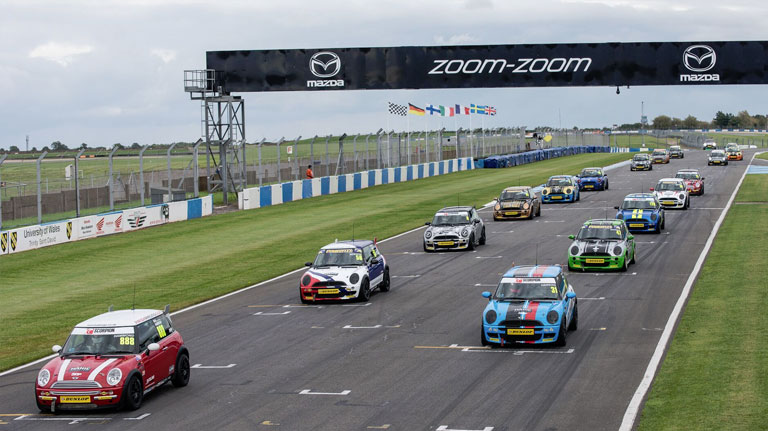 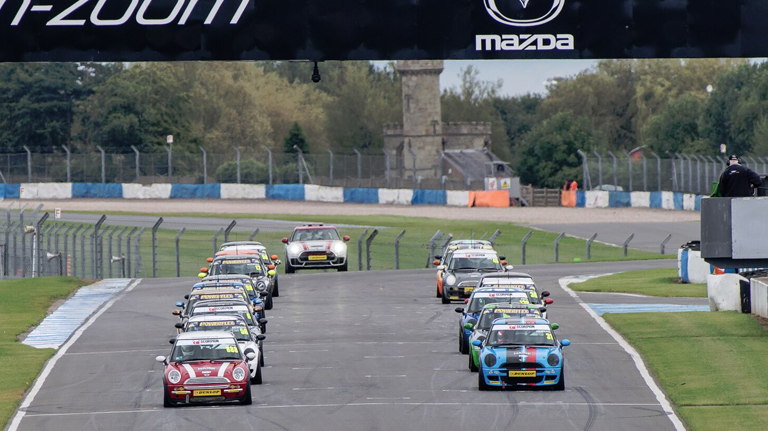 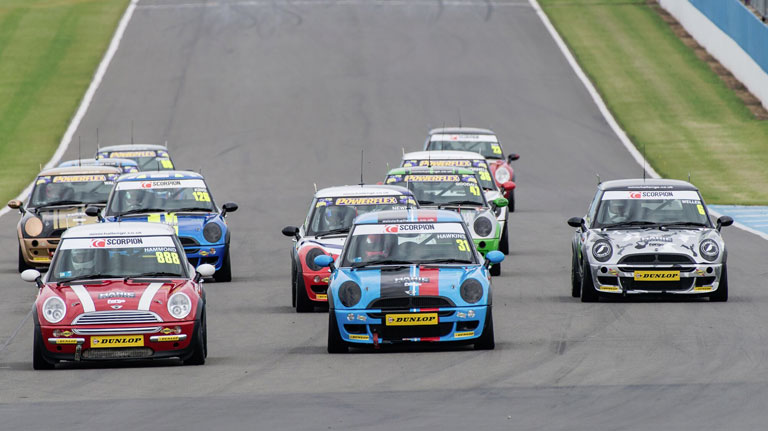 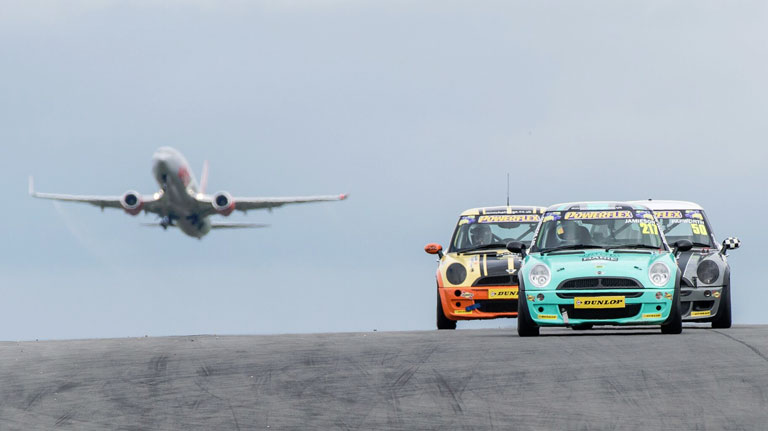 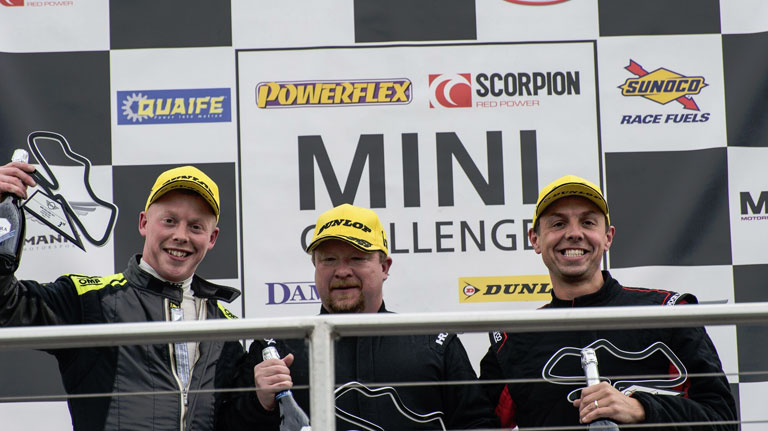 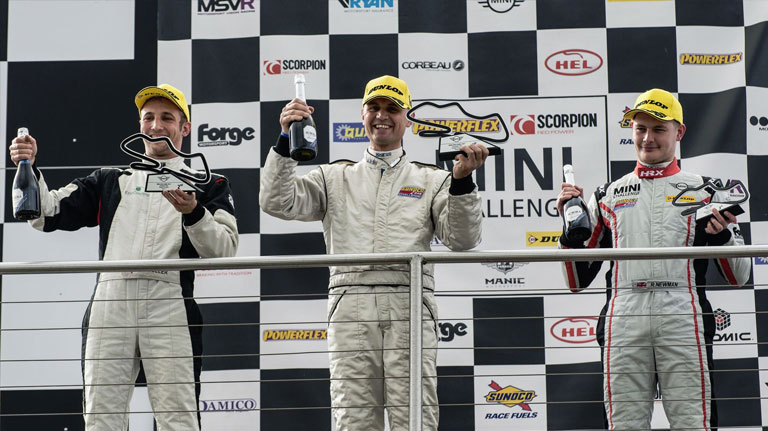 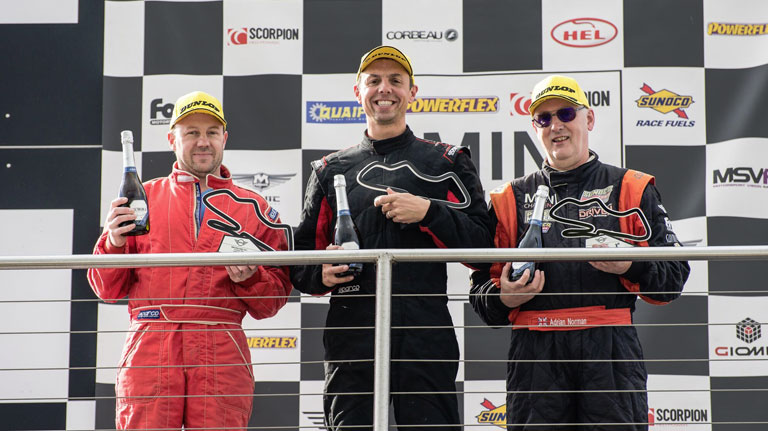