A Nice early start for the 9 open class cars for R53 and R56 “S” or JCWs. 15 minutes around the short Indy circuit. Ben Dimmack (R56) was fast straight out of the blocks and clinched P1 on the 3rd lap. Rob Austin (R56) tried in vain to trump him, getting close but 13 laps later, his penultimate lap, and he got P2 with a 0.12-second gap. Next up was Aaron Reeve in his R53, the one with the nice whine, 0.519 seconds off pole. Tim Bill was looking good in his freshly wrapped car with a newly rebuilt engine, he shared the second row. The 3rd row had Kevin Owen and Andy Montgomery, Andy losing his best time for exceeding track limits. There may be a lot of warnings this weekend for track limits at Graham Hill Bend, it is so easy to take too much kerb there if you are “on the limit”. Chloe Hewitt was looking well settled and was quicker than both Neil Ginley and newcomer Darryl Brown. The grid is made up in much the same order as it has been at all the races so far this year. 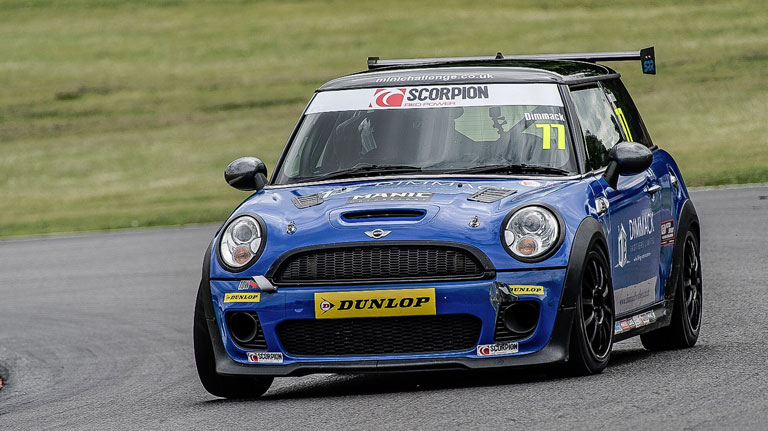 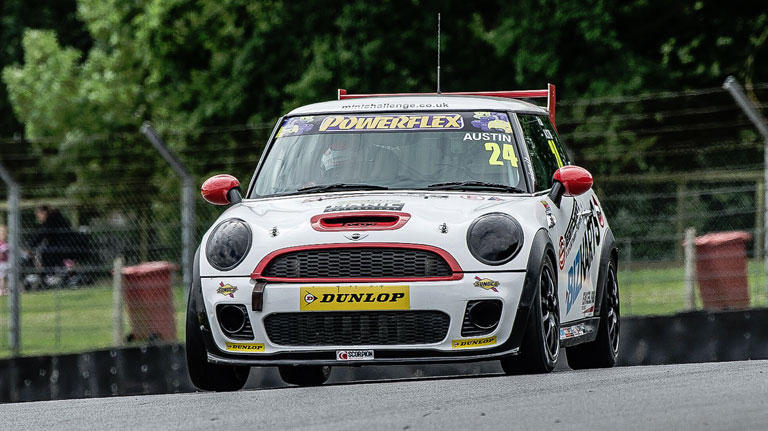 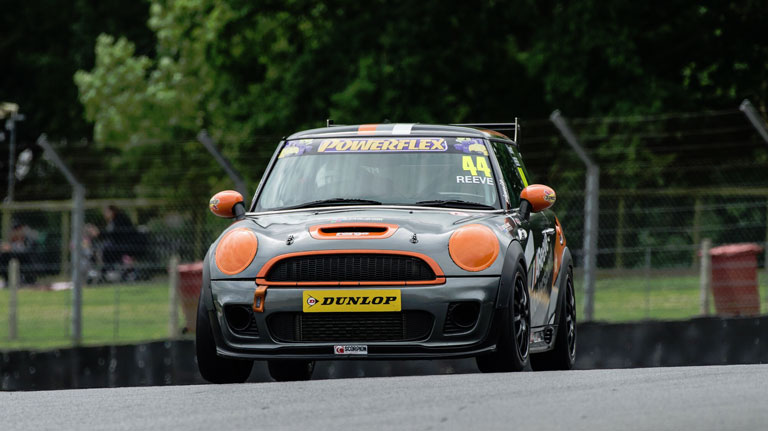 All assembled and ready to go, a small but quality grid. Ben Dimmack is always fast out of the blocks and is usually followed by Rob Austin and Aaron Reeve. Aaron’s car is now working well and he has been on the pace for the last 2 meetings. As his team are managing 9 cars this weekend it is a surprise that he finds time to race! A great race to watch with Ben Dimmack way out in front, with new tyres. At the chequered flag, his gap had been pulled down to 0.55 seconds with Ben slowing down to preserve his tyres.Rob was having a great battle with Aaron for the whole race. P1, P2 and P3 are how these 3 started and is also how they finished. Tim Bill was looking strong and stayed in contention for a podium throughout the whole race, he was slow off the grid allowing Kevin Owen to snatch 3rd, Tim overtook him halfway through the 2nd lap and stayed in P4 for the rest of the race. Chloe Hewitt had a great race with Neil Ginley and Andy Montgomery, Chloe getting the better of Neil but could not get passed Andy. So it looked great with 2 races going on at the same time. The 15 minutes passed and the chequered flag waved and they finished as: 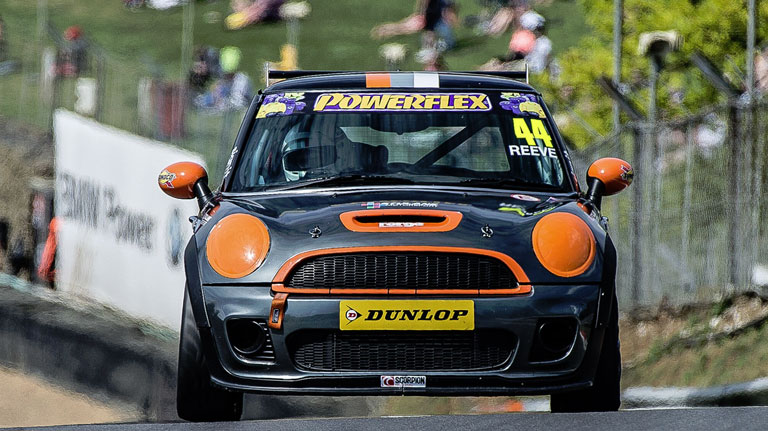 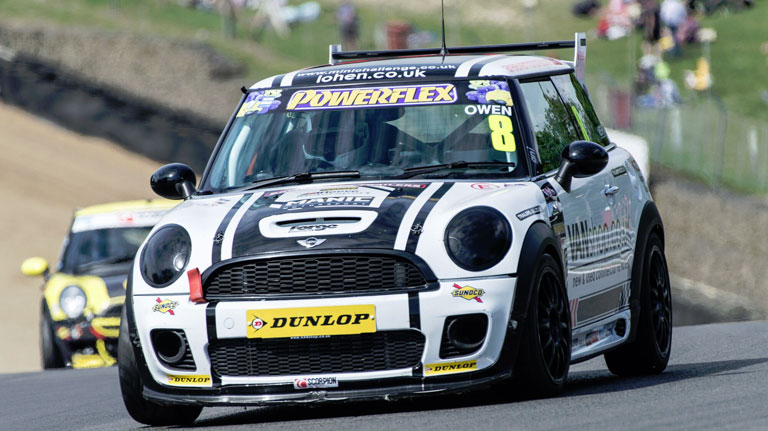 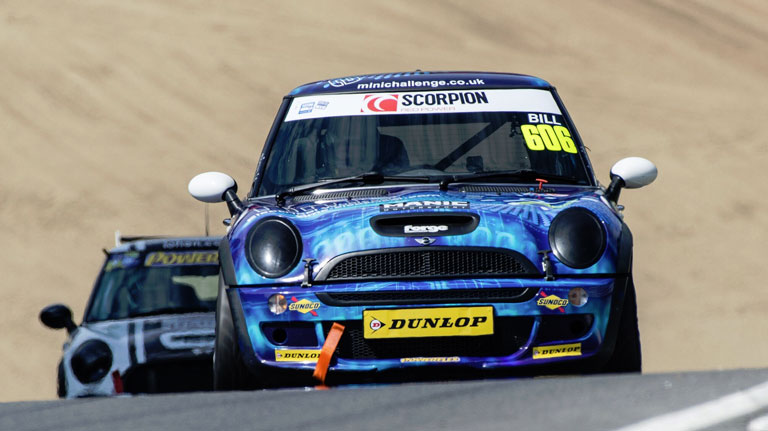 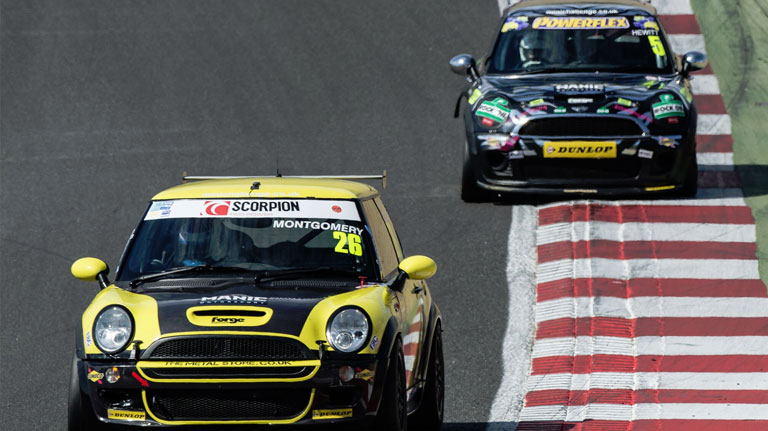 First race for the Open Class on Sunday started to bang on Midday, very hot sticky and 9 cars ready to go. Green Flag lap, cars all weaving to get heat into the tyres, as with cold tyres there is little grip And then there were only 8 cars! Unfortunately, Neil Ginley’s car snapped when weaving from side to side and into the barriers he went. The 8 remaining cars stayed on the grid while his car was recovered. 5 minutes later and another green flag lap before racing started. Off went Ben Dimmack again, followed by Rod Austin and Aaron Reeve, half way through the race Aaron managed to overtake Rob to claim 2nd place, he started chasing Ben very hard. If the race was a few laps longer, we may have seen the lead change, Aaron was driving his socks off, it was not to be. Rob Austin stayed safe in P3. With nearly an 18-second gap, Tim Bill was defending hard from being overtaken by Kevin Owen. Brands is very tight in places with a very limited number of places to overtake, with still one more race to go so Tim settled for P4. Kevin Owen settled for P5. Chole had a great battle with Andy Montogomery and managed to stay in front for a P6. Daryl Brown was getting race miles and experience under his belt and took the last place. 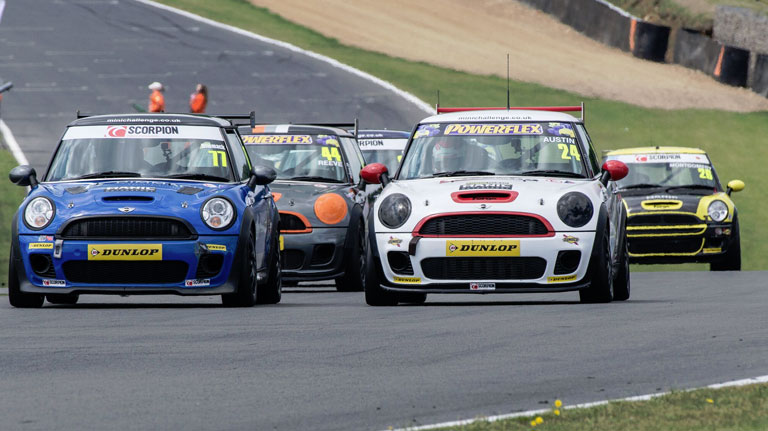 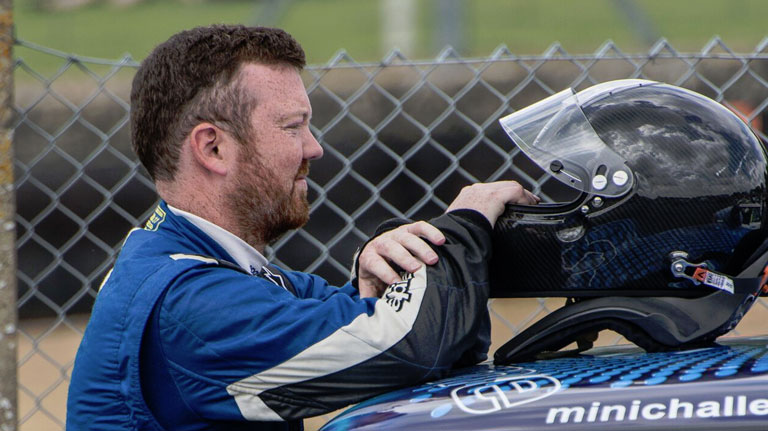 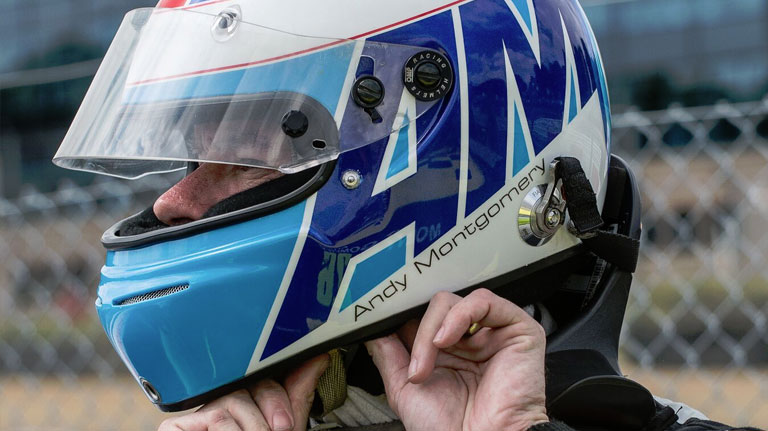 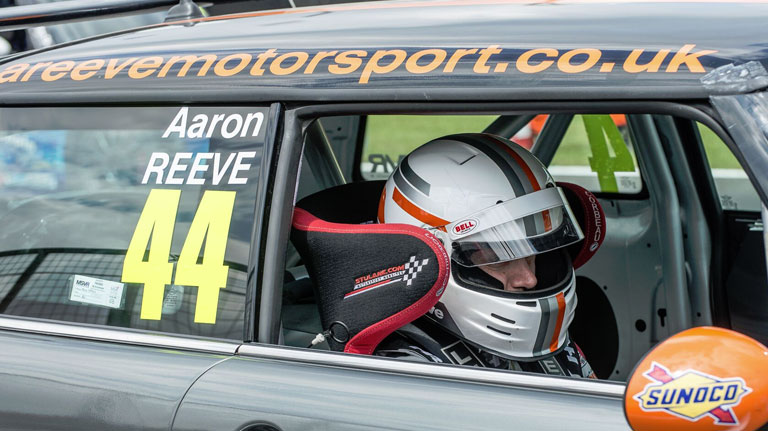 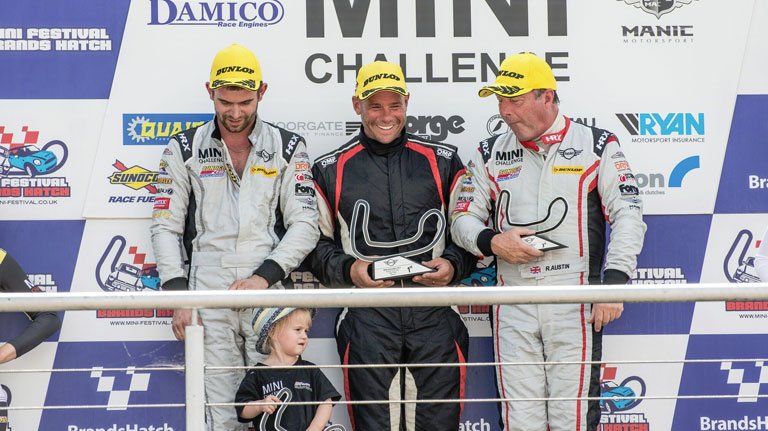 Reverse Grid time. Chloe Hewitt on pole position, next to Kevin Owen. Tim Bell was on the 2nd row alongside Rob Austin, row 3 had Aaron Reeve and Ben Dimmack, row 4 Andy Montgomery and Daryl Brown. Neil Ginley was a non-starter after the damage incurred before the last race. All cars made a good start as they raced down to Paddock Bend, Kevin Owen got the better of Chloe and Ben Dimmack pushed by them all to be in P2 after the first lap. Rob Austin was in P3 already. Rob past Ben Dimmack with a great move and he stayed in P1 for the remainder of the race. Ben’s tyres were suffering and he had to stay behind Rob. Aaron was up to P3 by the end of Lap 2 and there he stayed. Chole Hewitt had what was probably her best race of the season and stayed in P5 for the whole race. Andy Montgomery tried in vain to pass but never managed to pull it off. Tim Bill struggled for the whole race, down on power with Darryl Brown settling for the last place but putting more race miles under his belt.

The top 3 all visited the podium 3 times out of 3 races. Tim Bill is due to a podium and Kevin Owen is not too far behind either. The way Chole is driving she could also be in contention with a bit of assistance from the reverse grid. 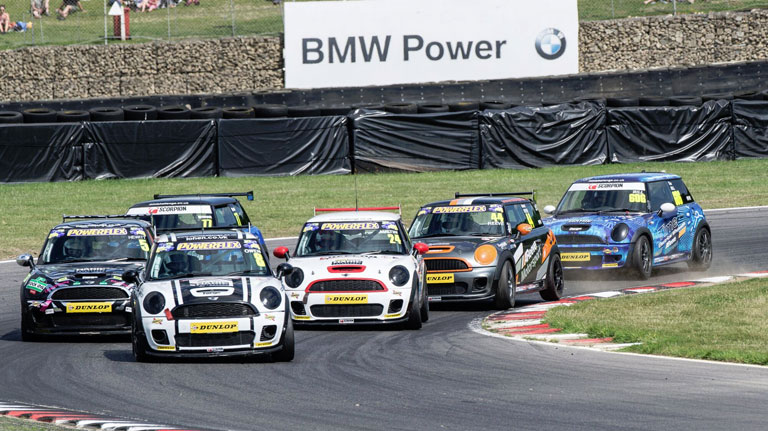 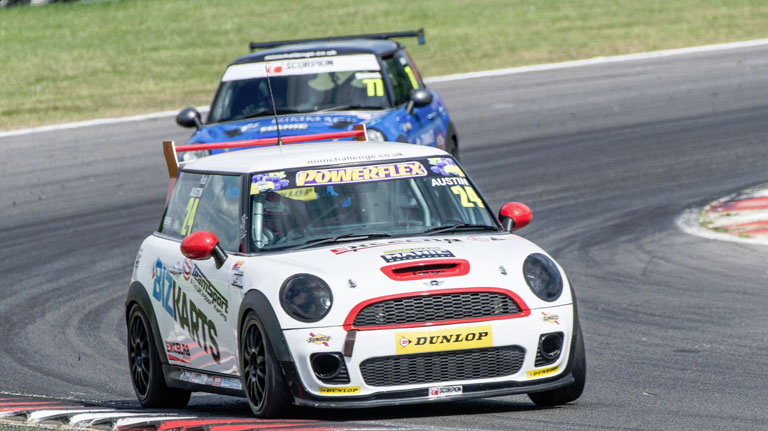 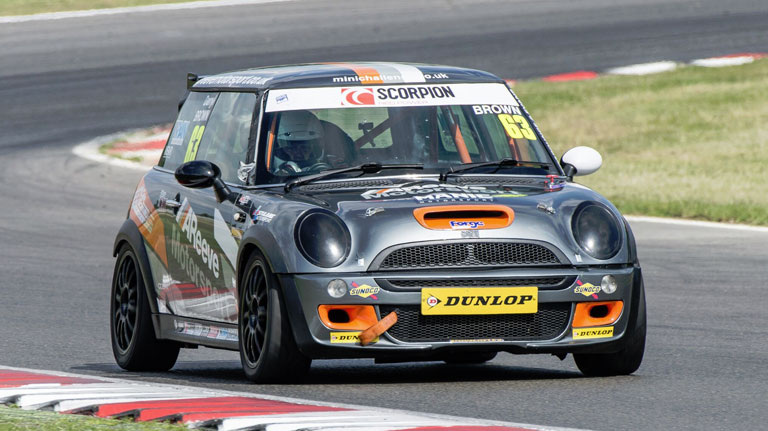 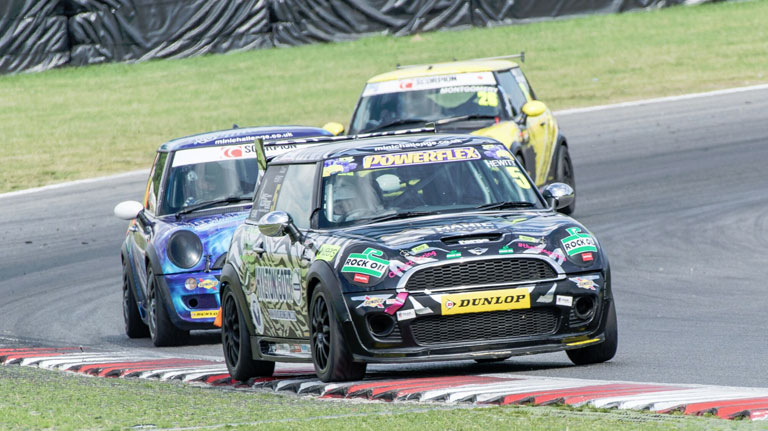 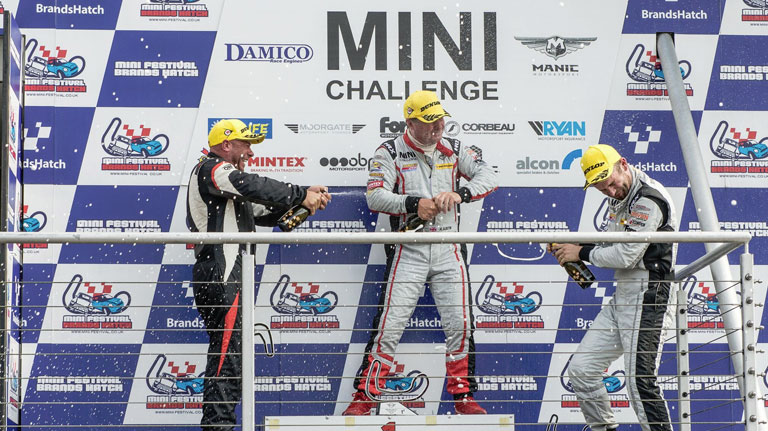