Sun, more sun, 60 MINIs, the Brands Hatch Indy Circuit and the MINI Challenge returned to Brands. As part of the MSVR MINI Festival, the MINI Challenge played the starring role of the weekend. The pit garages were full of MINI Challenge cars. Refined Concierge had their Marque up and full to capacity, using additional space overlooking the Cooper Straight. Even Matt Neal came along to enjoy the coffee and watch his sons racing. He also had a go in Henry Neal’s JCW in the Friday Test session. Everybody was buzzing: crowds, teams, organisers and me, waiting for the start. 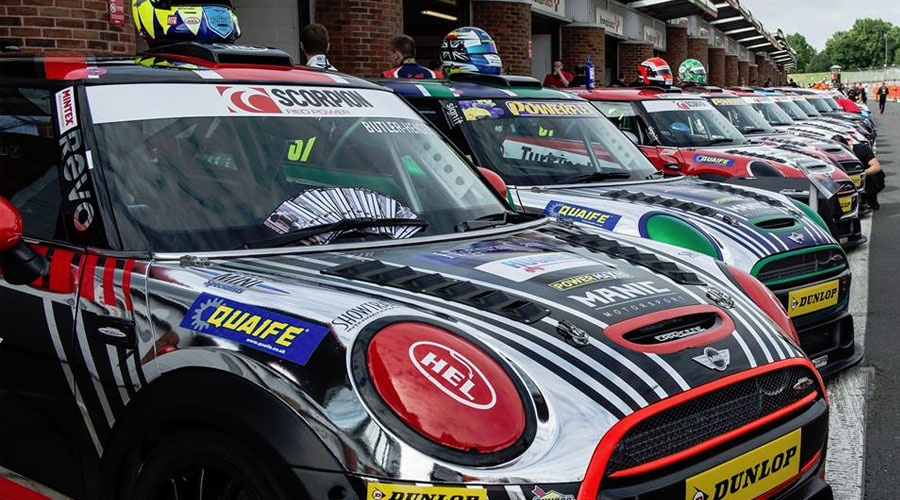 Qualifying had the battle of the Smiths mixed in with David Grady and Charlie Butler-Henderson. Brett Smith (Eurotech) continued his good run of form with Pole position, followed by David Grady (Unitec), Rob Smith (MINI UK ViP), Chris Smith (Excelr8) and Charlie Butler-Henderson (MINI UK ViP). With 27 JCWs circulating at great speed and darting into and out of the pits, it was really down to luck if you got a flying lap without traffic in the allotted 20 minutes. At long last, Neil Newstead (Oakfield MS) had finally started to get to grips with his JCW and was only 0.02 of a second behind Charlie.

The first race for the JCWs was at 16.00 hrs (4 o’clock in old money). A nice array of F56 JCWs made their way onto the grid – what a sight and a challenge to get them all into one picture! 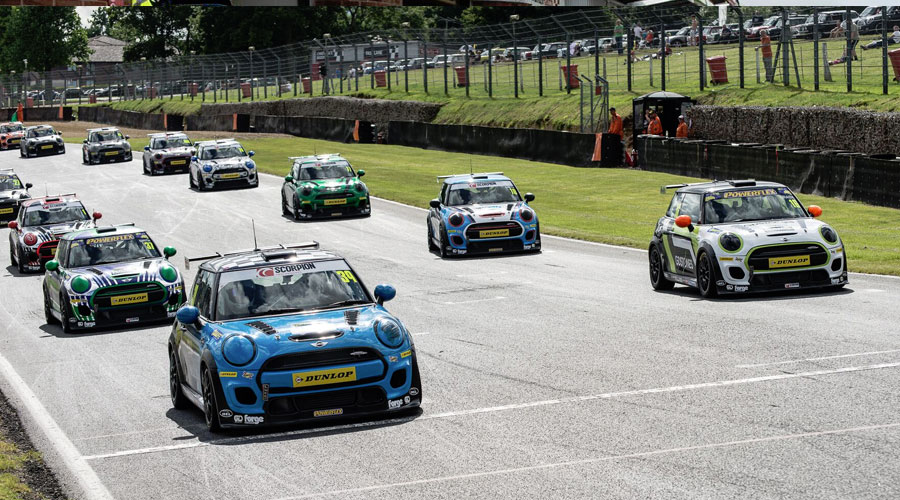 F56 JCWs on the Grid

What a race! Brett leading the way from lights to flag with David Grady following close behind just waiting for an opportunity to overtake that never appeared. The real race was between the MINI UK ViP team drivers of Rob and Charlie. Charlie tried every trick in the book to get past Rob, whilst being totally honest and no dirty tricks – well, he was his team mate. The last lap started and Rob left the tiniest of gaps going into Paddock bend and Charlie pounced with the latest braking I have ever seen for the final step of the podium. Brilliant is all I can say. Charlie was beaming from ear to ear, as you do. “That was hard work” said Charlie after the race, but it also gave him the lead in the Championship. The notable others were Jono Brown (Excelr8) 5th, Luke Read (Sussex Road & Race) 6th with his best performance of the year, followed by Jeff Smith (Eurotech), Luke Caudle (Excelr8), Nathan Harrison (Coastal) with Neil Newstead rounding of the top 10 with 21 laps of the Indy Circuit. Roll on Sunday.

Sunday morning opened with the pre ‘66 Minis for the endurance race warming up. This was closely followed by the circuit being closed with the public being given access to all the MINIs in a pit lane walkabout in the hot sun. 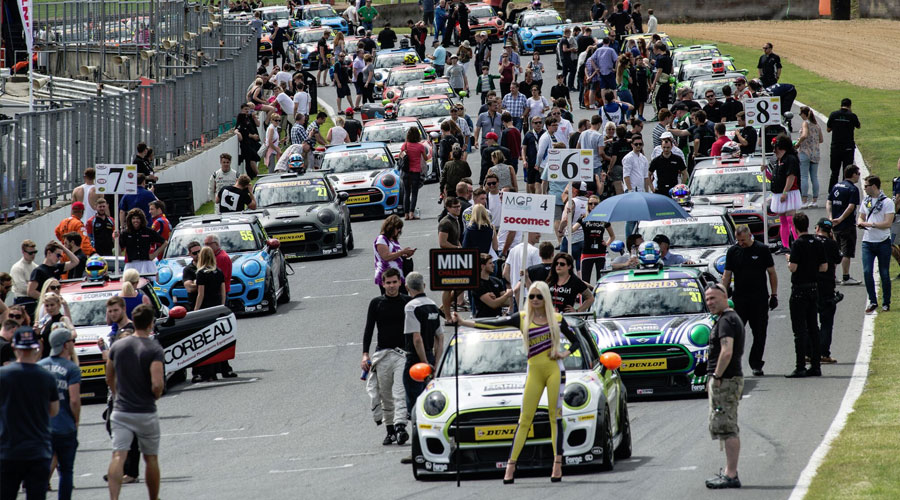 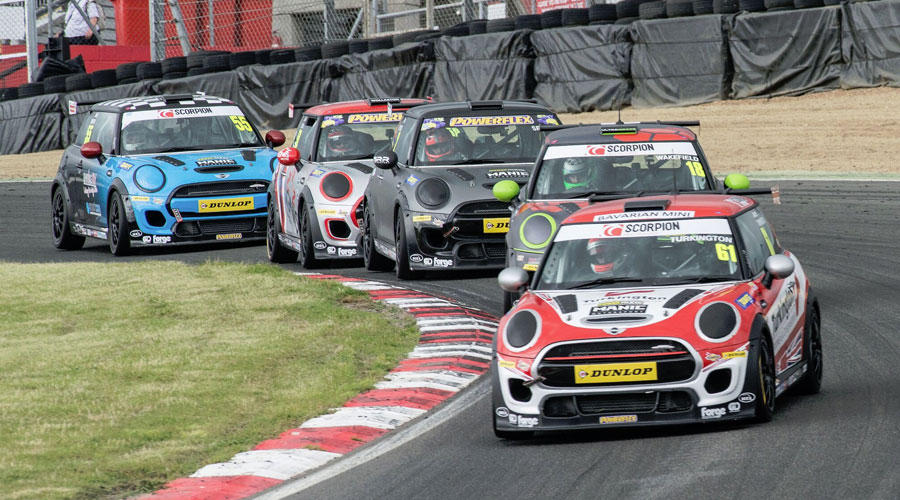 Lunchtime came and went with the Coopers and Ss racing mid- morning. The highlight of the day was the Grid Walk with all the MINIS on the grid allowing all the racegoers access to the grid, teams and drivers – what a sight! I was taking pictures whilst walking down to Paddock bend for the second JCW race.

David Grady scored a well-deserved victory, his third of the year. Brett Smith played follow the leader while Rob Smith was content just to beat Charlie. Charlie had an awful start and never really recovered from it, being followed by Luke Caudle, Neil Newstead, Henry Neal (Team Dynamics), Lawrence Davey (LDR), Nathan Harrison (Coastal) and Chris Smith making up the top 10.The top 10 clearly showing that any of these drivers are capable of a win if only they get a good start and lady luck is on their side.

This was followed by a short interlude while the Coopers and Ss came out to play and the next and last JCW race was on. As it was the last race for the JCWs that weekend, a reverse grid was used for the top 6 after a draw, a bit like the BTCC. 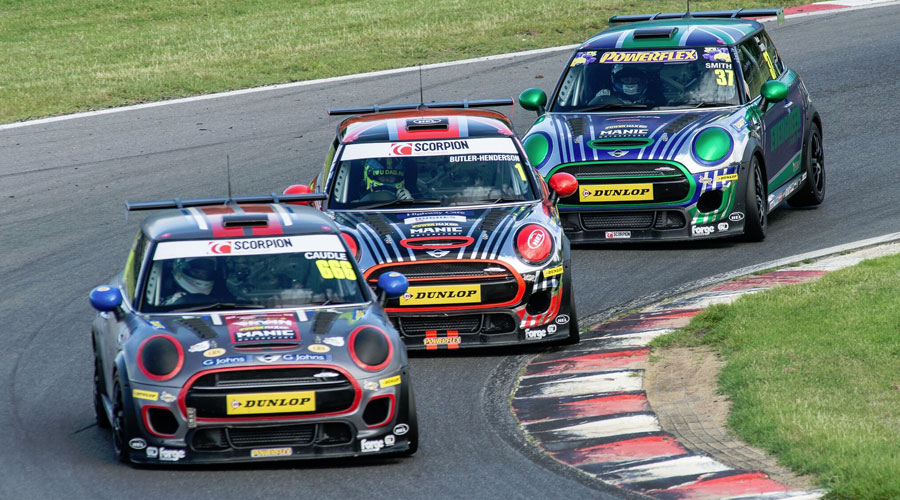 The last race was started on time and saw a brilliant getaway by pole sitter Luke Caudle. Unfortunately the race was red flagged after Steve and Calum King had a coming together with each other and the wall along the pit straight. This required a massive clear up and repairs to the tyre wall. The race restarted after a 30-minute delay and the race was shortened by 5 minutes to 15 minutes. This time Luke got another superb getaway, as did Charlie (more about that start later), with the next five cars being Robert Smith, David Grady (super consistent), Henry Neal (best result of the year), Lawrence Davey and Brett Smith, forming into train and that is the way they stayed until the chequered flag. 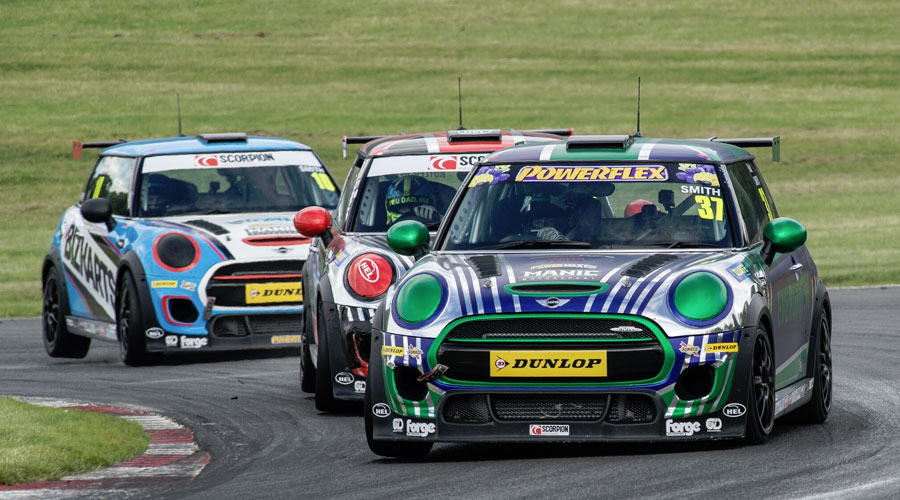 After the last race, the Stewards got into a huddle and decided that Charlie had such a good start that he had, in fact, just moved past his starting grid line. He gained no benefit but had to be given a 10 second penalty because that is what the rules say. Charlie had already left the country as he was due in Austria. He even missed the podium! His 10 second penalty moved him down to 8th place, but importantly he was still in the Championship lead.

The Coopers and Ss. 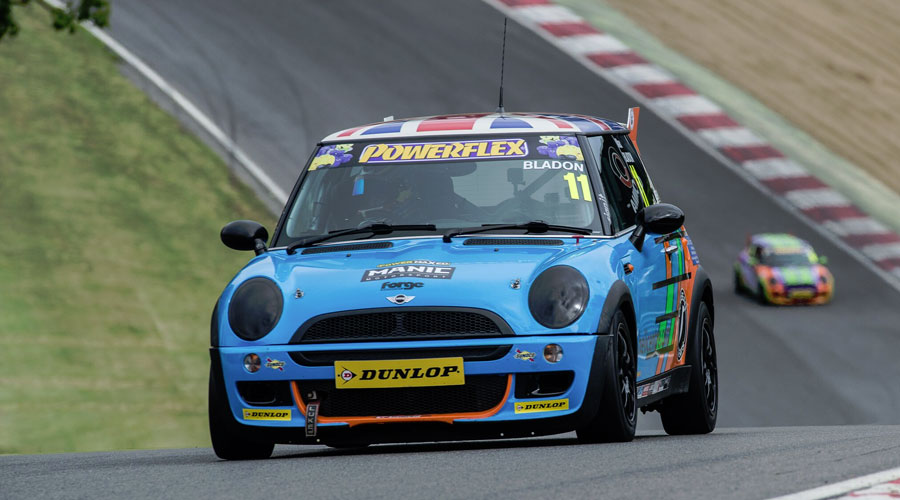 A mixed bag of cars and a massive problem for the grids. There were 31 cars, some Coopers, some R53 Ss and some R56 Ss, some novices and some experts. All on one grid! You guessed it: slow getting away Ss and fast getting away Coopers; two red flags and race 10 was abandoned. The stewards and promoters decided to put a 5 second start delay on the Coopers to prevent the same thing happening in the last race.

In Race 1, Max Bladon (Excelr8) did his usual trick of letting people think that he was not going to win a race. Josh Gollin (Coastal) came so near to taking a win, as did Simon Walton (Rob Sims Racing), both being beaten by traffic and Max’s skill. Michael Bamber held onto 3rd for a while but was overcome by Simon. 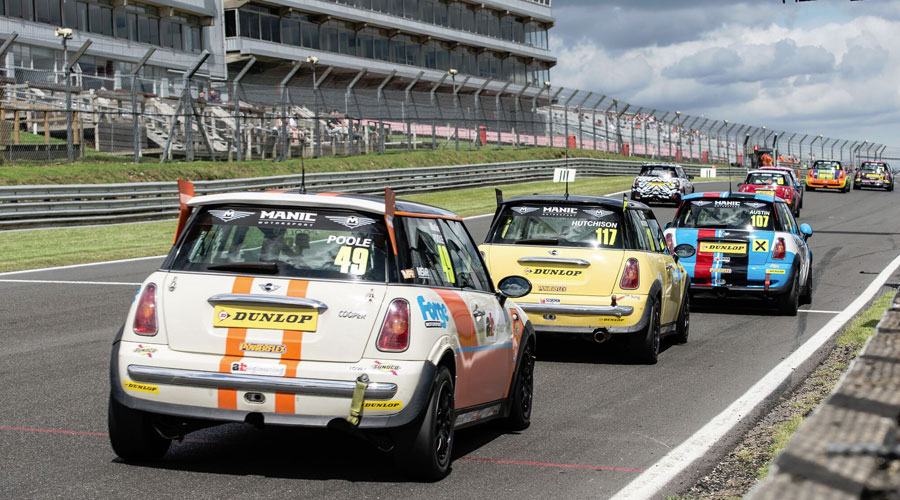 A string of Coopers

In the S class, once again Steve Cocker (Oakfield) should have won but had a moment at Clearways and threw it all away. This left Rob Austin (Excelr8), Tim Porter (Oakfield) and Scott Adam (LDR) to take the 1,2,3. The open class was won by Keith Issatt. 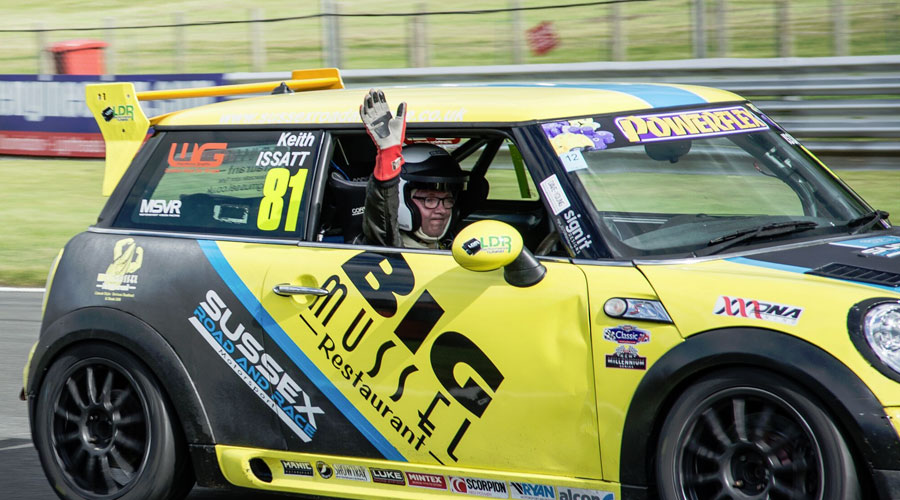 The second Cooper and S race was abandoned after two red flags for the reasons I explained earlier.
The grid for their last race had Rob Austin and Tim Porter on the front row of the Ss and Max Bladon on pole for the Coopers next to Michael Bamber, Josh having received a four place grid penalty for an earlier indiscretion. This race was again interrupted by a safety car with cars off at Clearways and Daren Chatt’s car stopped at the entry to Paddock Hill, not exactly a safe place. On the restart, they all behaved well. In the S class, Scott got a 2.5 second penalty for passing under yellows giving Rob Austin the win and Scott the 2nd place, whilst Carlito Miracco was 3rd (Sussex Road & Race).

The Cooper class was again won by Max Bladon making it 11 wins out of 11 races, which must be some kind of record. He was followed home by Sam Weller (Race Track Solutions) and Josh Gollin. 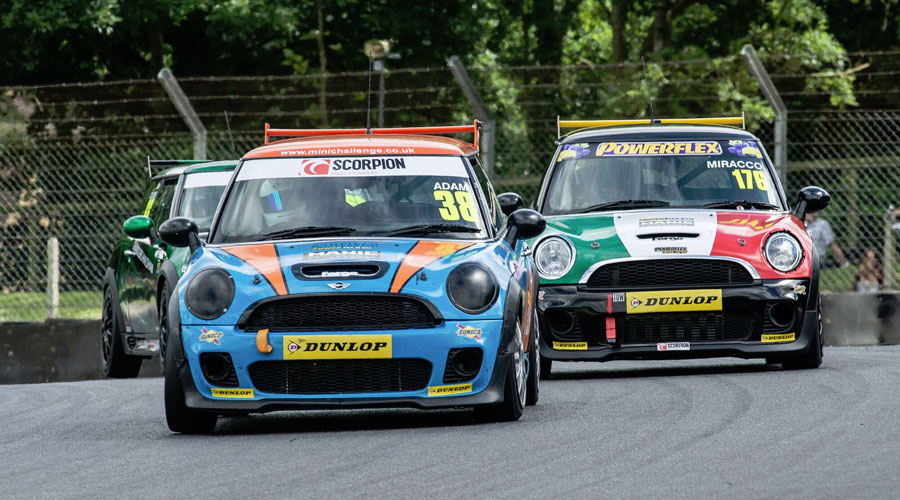 Well, after a great weekend, with a superb amount of activity going both on and off the track, we came to the end of a superb weekend of MINI racing. Next up is Oulton Park for the MINI Festival North, yet another MANIC day. Manic Maps are one of the MINI CHALLENGE sponsors so perhaps we should change the name of the series to MANIC MINI CHALLENGE! 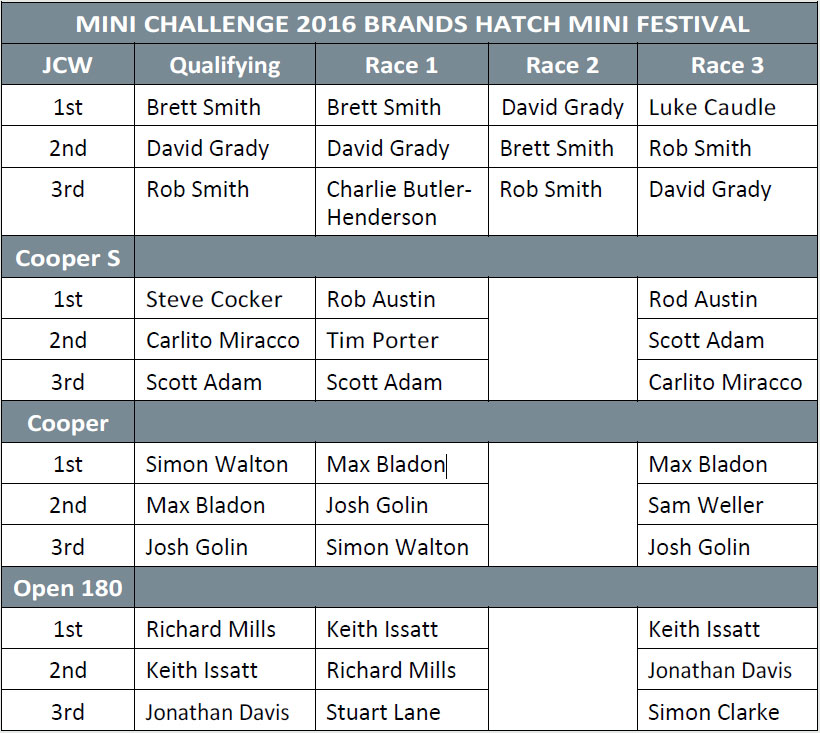